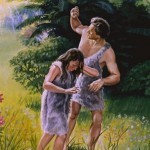 Immortality for fallen humanity is an idea so terrible God would not even talk about it.

“When He {God} expelled Adam from the Garden of Eden, He said, “Behold, the man is become like one of us, to know good and evil: and now, lest he put forth his hand, and take also of the tree of life, and eat, and live for ever …!” Therefore the LORD God sent him forth from the Garden of Eden.” God did not finish the statement, what it would be like if fallen man ate of the tree of life and lived forever. To indicate the unfinished nature of his comments I have closed verse 22 with several dots and an exclamation mark. We have here a figure of speech called “sudden silence” or, in Latin, reticentia. It is the sudden breaking off of what is being said or written, so that the mind may be more impressed by what is not said. The latter is too wonderful, too solemn, or too awful for words. In this instance, the exact consequences of fallen man eating of the tree of life are left unrevealed. They must have been too awful to contemplate or talk about! … {I}t required the decision to drive Adam and Eve away from the tree of life {T}he whole point of the passage is that God expelled Adam and Eve from the garden, and away from the tree of life, to keep them and their descendants from sustaining themselves from it, and having therefore some form of immortality or life of indefinite duration. The very idea of such a thing was too terrible to talk about.”

The bottom line is that what God finds a thing too terrible to contemplate, something he cannot allow, is made, by many theologians, a centrepiece of the gospel: that God will sustain human beings alive forever in a sinful state. May it never be!

Rather we must find access to the tree of life once again by faith in Jesus Christ or we will perish everlastingly.