You are here: Home / Theology / Exploring Conditional Immortality / What does the Witch at Endor teach us? 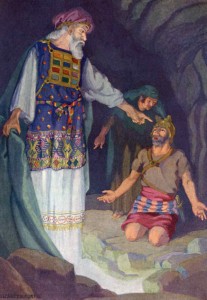 King Saul, rejected by God, asked a “medium” to raise up the prophet Samuel for him. This passage is often taken as evidence that the “soul” survives the death of the body. But note the following:
1. Neither the word “soul” nor the word “spirit” appears in the passage.
2. Solomon, despite being familiar with this incident, could write (only 80 years later) “the dead know nothing” (Ecclesiastes 9:5).
3. Samuel came “up from the ground”, not “down from Heaven.”
4. Samuel appeared as he had died, as “an old man in a robe.” (Do “disembodied souls” appear old? Do “immortal spirits” wear robes?).
5. Samuel asked Saul, “Why have you disturbed me?” as if he had been asleep not consciously alive in Paradise or Heaven.
6. Samuel told Saul, “Tomorrow you and your sons will be with me.” Saul did not go to heaven. At death, good and bad alike go to one place, the grave.

God would not suffer his holy prophet to be at the beck and call of one under sentence of death according to Divine Law (Ex. 22:18, Isa. 8:19). Rather, God himself caused Samuel to rise bodily from the dead and to appear there, then to return to the grave immediately afterwards.

Read More about The Witch of Endor