You are here: Home / Theology / Evangelical annihilationism / Historical background to The Rich Man and Lazarus 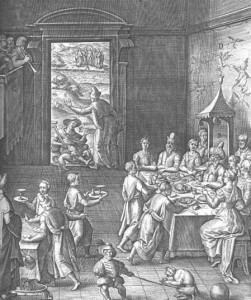 Scholars have noted many parallels to the Rich Man and Lazarus found in ancient literature.

Accordingly, David B. Gowler, in “The Contexts of Jesus’ Parables”1, states:

“Some scholars have suggested that the Parable of the Rich Man and Lazarus (Luke 16:19–31) derives from an Egyptian folktale about the journey of Setme Chamois (led by his son Siosire) through the realm of the dead. They believe Jesus adapted this Egyptian story for his own purposes and created the second half of the parable (16:27–31).

A closer examination of the evidence, however, calls for a broader, Greco-Roman comparative framework for reading the parable. Ronald Hock, for example, provides an apt comparison from the Lucian texts, Gallus and Cataplus, where a poor, marginalized artisan named Micyllus goes hungry from early morning to evening and must bear the slights, insults, and beatings of the powerful. When Micyllus and a rich tyrant named Megapenthes die, they both make the trip to Hades.

Megapenthes, like the rich man in Jesus’ parable, tries to strike a bargain to alter his situation, but to no avail. Finally, Micyllus and Megapenthes face Rhadamanthus, the judge of the underworld. Micyllus is judged to be pure and goes to the Isle of the Blessed. Megapenthes’s soul, however, is stained with corruption, and he will be appropriately punished. In Hock’s opinion, both this story and the Parable of the Rich Man and Lazarus betray the ancient Cynic philosophers’ views on the problems with wealth and the virtues of poverty.”

The Rich Man and Lazarus \ What can we learn?