You are here: Home / Theology / Immortality / Is Man Immortal?

For many years I tenaciously clu 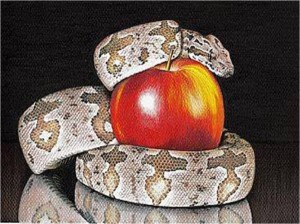 ng to the dogma of natural immortality. At length I so far laid aside my prejudice as to give the whole subject a thorough investigation. I became intensely in earnest to know the truth, whatever might befall my preconceived opinions. This investigated resulted in a radical revolution of sentiment in regard to man’s nature and the sinner’s destiny. I have been compelled by an overwhelming array of Scripture evidence, to reject and repudiate the current doctrine of natural immortality. I subjoin a few reasons, very briefly stated for this rejection.

1. The doctrine of natural immortality has a very unfavourable origin.   It can be traced back through the Romish Church to the Pharisees, and from them to the heathen philosophers and idolatrous Egyptians! Who advocated it. They probably received it by a sort of Satanic mesmerism; for the old Serpent first published the doctrine amid the lovely bowers of Eden in these words: “Ye shall not surely die.” (Gen. 3:4). A dogma that was invented by the devil, received by Pagans, nurtured by Papists, and adopted by Protestants, ought to be looked upon with some suspicion.

2. It is at variance with the inspired record of man’s creation. His origin is succinctly stated thus: “And the LORD God formed man of the dust of the ground, and breathed into his nostrils the breath of life; and man became a living soul.” (Gen. 2:7.) There is not the faintest intimation here of an invisible intangible, imponderable, immaterial, immortal conscious entity, without length, breadth, or thickness, without exterior or interior, capable of thinking, knowing, and feeling, independent of the body, and destined to live through all the years of God.

3. It clashes with the Bible account of man’s fall. Adam was placed on probation. A simple test was applied. Obedience would have brought immortality, while disobedience would as certainly result in mortality. The penalty was thus briefly stated: “in the day that thou eatest thereof thou shalt surely die” (Gen 2:17,) or , “dying thou shalt die.” Whn a term is used for the first time, it ought to be used in a plain, natural, literal sense. It was so used in Eden. If the penalty in Eden was moral death, then the doctrine of Universalism is true; “For as in Adam all die, even so in Christ shall all be made alive.” (1 Cor. 15:22.)  Adam sinned. He at once became a dying man. He was driven out of paradise, “lest he put forth his hand, and take also of the tree of life, and eat, and live for ever.” (Gen. 3:22.) O, it was the hand of love that pushed fallen and sinful man aside; that shut him away from the tree of life, and thus cut off all possibility of his becoming immortal in sin and misery!

4.   It renders the execution of the sinner’s penalty impossible. God allowed the race to be propagated under the malediction of physical death, yet coupled with provisions for the future. Adam’s disobedience lands all his progeny in the grave; but Christ’s obedience lifts them all out of it. The whole human family share so fully in the atonement of Jesus as to have secured to them an unconditional resurrection from the Adamic death. Every man must now stand or fall for himself. Whoever will come into the glorious plan will be eternally saved. Whoever refuses must die for his own sins. This awful doom awaits the impenitent, after the judgement verdicts shall have been pronounced. In various phrases do the Scriptures teach the final extermination of the wicked in the “lake of fire.” They shall “die.” They shall “perish.” They shall be “destroyed.” They shall be “consumed.” They shall be “burnt up, root and branch.”  Such a destiny would be impossible, if man possessed an immortal soul.

5. Immortality is never ascribed to man. In our common version [the KJV] the term “immortal” occurs only once, and is then applied to God. (1 Tim. 1:17.) The term “immortality” is found five times; from which we learn: (1) that God only possesses it (1 Tim. 6:16); (2) that Christ brought it to light in the Gospel (2 Tim. 1:10); (3) that we are to seek for it (Rom. 2:7); and (4 and 5) that Christians are to put it on at the resurrection (1 Cor. 15:53, 54). Such terms as “undying soul,” “deathless soul,” “never dying spirit,” though so common in theology are nowhere to be found in the Bible. So far from teaching that immortality is a birthright possession, the Scriptures everywhere hold it up as a priceless boon to besought – a blessing for which we are entirely dependent upon Jesus Christ, the great Life-giver.

6. The doctrine of natural immortality supersedes the necessity of a resurrection. The difference between Church theology and Bible theology is this: the former predicates a future life upon the assumed fact of inherent immortality; the latter predicates it upon a resurrection from the dead. There is a natural antagonism between the two positions. Hence it is that the glorious doctrine of the resurrection, so conspicuous in the teaching of Christ and the Apostles, has fallen into disrepute. Many popular divines utterly repudiate it. Others habitually ignore it. In the Churches generally, very little stress is laid upon it. Indeed, why should there be if the prevailing notions are correct? If death is a grand emancipation, coming with a friendly hand to open our prison and let us go free, if “death is the gate to endless joys,” if the dead are not really dead, but more fully alive than ever; then a resurrection is entirely superfluous, and ought to be rejected.

7. It reduces the judgement scene to a nullity. If the current view is correct, that the real man is immortal, “shuffling off this mortal coil” and entering upon his reward at death, surely a judgement day would be entirely useless. Consistency demands that we should either give up the idea of a coming tribunal, or cease to believe that man can be rewarded before he is judged. Popular theology would have us believe that Christians are continually flying up to heaven, and sinners sinking down to hell! That the one class are already crowned with glory, and the other class already cursed with the pangs of their merited doom, but that there is still a day of judgement, when the saints are to be rallied from their abode of blessedness, and sinners are to be brought out of prison of despair; that they are to receive their formal sentence, and then be sent back to their former abodes of blackness or bliss! Can anyone seriously believe that God’s administration will ever be so absurd?

9. The dogma of natural immortality is the fruitful source of dangerous error. It has given birth to a hateful progeny. It is the foundation of the worst religious developments that have ever cursed the earth. The intelligent reader will hardly venture to deny that Mormonism, Mahometanism, Swedenborgianism, Shakerism, and Spiritualism are built upon the assumed fact that man is immortal.  It is the boasted mission of Spiritualism, indeed, to teach that “man has an immortal soul.” The whole system depends upon it. And yet it is but a natural and logical outgrowth from what the Churches generally advocate as “orthodoxy.” Spiritualism is “orthodoxy” gone to seed. Nor can we with any consistency pour out denunciations upon a class religionists for having travelled legitimately to certain conclusions from the premises we have so generously granted them. Who does not know that Mariolatry and Purgatory are based upon the assumption that dead folks are alive? Let the Scripture fact that “the dead know not anything” be established; and there will be no more money paid to have departed friends prayed through the pains of Purgatory! Let the whole Catholic Church be convinced that the virgin Mary is now dead and she will cease to be an object of worship. The horrid doctrine of eternal torment would never have found a place in the Church of God but for the antecedent notion of natural immortality. This granted, the other is a logical necessity, unless it can be shown that all men are to be saved. But the doctrine of endless misery is so foul a slander on God’s character that many have been compelled to repudiate it. Assuming that man is immortal the only alternative is eternal torment or universalism. The latter is a natural rebound from the former. If men are to exist eternally, they must exist in a state of happiness or misery. The one being rejected, the other must be accepted. The consequence is, that the dogma of unending agony is making men universalists and infidels on a large scale. Universalism and endless misery are both built upon the foundation of inherent immortality. They are the dangerous extremes. The truth lies between them. But enough. The bitterness of the fruit attests the badness of the tree.