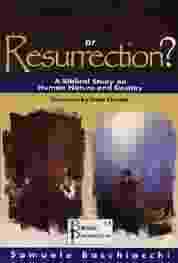 The description of the fate of the wicked found in Isaiah 66:24 is regarded by some traditionalists as the clearest witness to eternal punishment in the Old Testament. The setting of the text is the contrast between God’s judgment upon the wicked and His blessings upon the righteous. The latter will enjoy prosperity and peace, and will worship God regularly from Sabbath to Sabbath (Is 66:12-14, 23). But the wicked will be punished by “fire” (Is 66:15) and meet their “end together” (Is 66:17). This is the setting of the crucial verse 24, which says: “And they shall go forth and look on the dead bodies of the men that have rebelled against me; for their worm shall not die, their fire shall not be quenched, and they shall be an abhorrence to all flesh.”

R. N. Whybray sees in this text “an early description of eternal punishment: though dead, the rebels will continue for ever.”10 In a similar vein, Peterson interprets the phrase “their worm shall not die, their fire shall not be quenched” as meaning that “the punishment and shame of the wicked have no end; their fate is eternal. It is no wonder that they will be loathsome to all mankind.”11

Isaiah’s description of the fate of the wicked was possibly inspired by the Lord’s slaying of 185,000 men of the Assyrian army during the reign of Hezekiah. We are told that “when men arose early in the morning, behold, these were all dead bodies” (Is 37:36). This historical event may have served to foreshadow the fate of the wicked. Note that the righteous look upon “dead bodies” (Hebrew: pegerim), not living people. What they see is destruction and not eternal torment.

The “worms” are mentioned in connection with the dead bodies, because they hasten the decomposition and represent the ignominy of corpses deprived of burial (Jer 25:33; Is 14:11; Job 7:5; 17:14; Acts 12:23). The figure of the fire that is not quenched is used frequently in Scripture to signify a fire that consumes (Ezek 20:47-48) and reduces to nothing (Am 5:5-6; Matt 3:12). Edward Fudge rightly explains that “both worms and fire speak of a total and final destruction. Both terms also make this a ‘loathsome’ scene.”12 To understand the meaning of the phrase “the fire shall not be quenched,” it is important to remember that keeping a fire live, to burn corpses required considerable effort in Palestine. Corpses do not readily burn and the firewood needed to consume them was scarce. In my travels in the Middle East and Africa, I often have seen carcases partially burned because the fire died out before consuming the remains of a beast.

The image of an unquenchable fire is simply designed to convey the thought of being completely burned up or consumed. It has nothing to do with the everlasting punishment of immortal souls. The passage speaks clearly of “dead bodies” which are consumed and not of immortal souls which are tormented eternally. It is unfortunate that traditionalists interpret this passage, and similar statements of Jesus in the light of their conception of the final punishment rather than on the basis of what the figure of speech really means.

Four of the ten chapters of  Immortality or Resurrection? can be accessed online.