You are here: Home / Theology / Body and Soul / Plato versus Christ

This article looks at the Platonic Soul versus the resurrection. 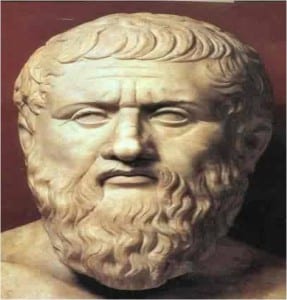 The Greek philosopher Plato has been called “the prophet of the doctrine of immortality.” By this, of course, is meant the immortality of a human soul.

It was Plato’s earnest undertaking to prove the eternal existence of the soul – its pre-existence, its present existence, and its continued existence after death. Thus, to Plato, death was the medium to a blissful future, for it meant the release of the soul from the body (cf. Dollinger, The Gentile and the Jew, I, 336).

By way of contrast, Jesus of Nazareth may be called the prophet of the resurrection of the dead. Not only did He teach a resurrection from the dead, but he also claimed the power and authority to perform that resurrection. He told Peter and the disciples that “the gates of hell” would not prevail against His “church” or “congregation” (Mt. 16:18). The power of the grave could not keep them. Someday, in the resurrection, they would come forth.

He told the Jews that as the Father raises up the dead, and forms them alive, so He, the Son, forms them alive. Resurrection power has been committed to the Son of God (Jn. 5:21).Finally, Jesus said that someday the dead would hear the voice of the Son of God — and those who hear that voice will come to life again (Jn. 5:25). They will live again in resurrection. Jesus of Nazareth proved His claims. He brought the widow’s son back to life (Lk. 7:15). He raised the little maid, Jairus’ daughter (Lk. 8:55). And finally, He raised Lazarus from the dead (Jn. 11:44). The philosopher Plato never really proved his claims as to “the immortality of the human soul.” One of his so-called proofs was to accept as a certain fact the pre-existence of the soul (cf. Dollinger, op. cit., p. 337)!

Plato and his followers have never captured a so-called “soul” and put it on display. They have always had much help from the doctrines and practices of spiritualism, and from demons that impersonate “departed souls.” But the evidence is rejected, both by careful students of Scripture and by reasonable men.

Given these facts, is it not reasonable that we reject Plato’s doctrine, and accept that of Christ?

One excludes the other. If we have immortal souls, then we really do not need a resurrection from the dead — in fact, we do not really die!

But God’s Word tells us that death is conquered, not by Plato’s philosophy, but by Christ’s resurrection from the dead, “Thanks be to God, which giveth us the victory [over death and the grave] through our Lord Jesus Christ” (1 Cor. 15:57).