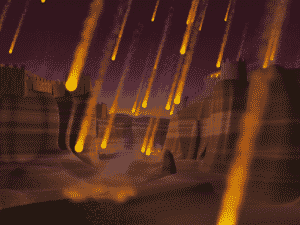 A third angel followed them and said in a loud voice: “If anyone worships the beast and its image and receives its mark on their forehead or on their hand, they, too, will drink the wine of God’s fury, which has been poured full strength into the cup of his wrath. They will be tormented with burning sulfur in the presence of the holy angels and of the Lamb. 11 And the smoke of their torment will rise for ever and ever. There will be no rest day or night for those who worship the beast and its image, or for anyone who receives the mark of its name.”

Most people understand that the Revelation is full of highly figurative language, largely drawn from imagery used by the Old Testament prophets. This being so we must carefully examine the Old Testament background that lies behind all of the images used to describe the final fate of the lost in Revelation.
In fact, the passage under consideration does not describe the final fate of the lost at all. It is a description of the judgments to fall upon those who worship the beast and receive his mark during the Great Tribulation described in the Apocalypse.

Nevertheless, four things are said of those who worship the beast and receive his mark:

To drink the wine of God’s wrath is a common Old Testament symbol of judgment. They drink, they stagger, they fall down to rise no more (Jer. 25:15-16, 27). They will become as if they had never been (Obadiah 16). To drink down to the dregs (Psa. 75:8), symbolizes the completeness of the destruction. But this is a symbol of destruction, not of eternal torment.
So too, the imagery of “fire and brimstone” brings to mind the destruction of Sodom and Gomorrah (Gen. 19:24) which Jude tells us (in v. 7) is an “example” of what will happen to those who “suffer the punishment of eternal fire.” The overthrow of Assyria is depicted in similar language (Isa. 30:27-33), as is the destruction of Edom (Isa. 34:8-10) and of Gog (Ezekiel 38:22). In each case the end result is that the wicked are consumed not tortured. Nothing will be left but ashes (Mal. 4:1-3).
The image of rising smoke is another common Old Testament symbol of destruction used, for example, to describe the total destruction of Edom, (Isa. 34:10). When Abraham arose the morning after the destruction of Sodom and Gomorrah he saw smoke ascending like a memorial to God’s justice. The inhabitants of those cities were not however still being tormented. They had been “reduced to ashes” by the “eternal fire” (2Pet. 2:6, Jude 7). Notice it is the smoke of their torment that goes up forever and ever not their torment that goes on forever and ever.
The phrase “no rest day or night” signifies the continuity of the judgment, not its perpetuity. For those who worship the Beast and receive his mark, there will be no break, no reprieve, no relaxing, no respite until those judgments depicted throughout the Revelation be exhausted. The sinner always lives under such uncertainty (Deut. 28:66, Psa. 32:4) to one degree or another.

In every instance the imagery of Revelation 14:9-11 speaks of destruction, not eternal torment.