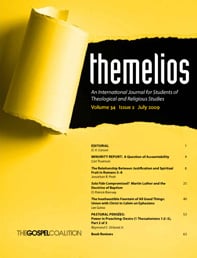 In an article entitled Destroyed For Ever: An Examination of the Debates Concerning Annihilation and Conditional Immortality (Themelios, 1996) Tony Gray did an excellent job of summarising recent scholarly debate over conditional immortality.

He concludes “that the torrent of books and articles against annihilationism may have left some of its arguments ignored or in the background” and that “annihilationism is at the very least an option that ought to be considered fairly and honestly”. At the same time he suggests that “there remain major problems which proponents of the doctrine [annihilationism] must tackle.” Chief among these he suggests “hermeneutics, concepts of justice and assumptions about immortality.” He suggests that “much is left for future discussion and debate” and echoes John Stott’s plea for “frank dialogue among evangelicals on the basis of Scripture.”

The article is well worth reading in full.

(Note. The cover shown here is not that of the issue in which the article referred to appears).