You are here: Home / Theology / Body and Soul / The Nature of Man 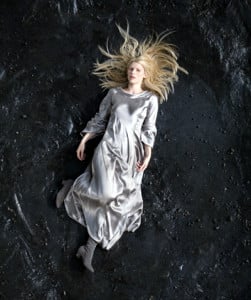 This brief address was given around the communion table by a friend of mine at a church in Hamilton, New Zealand. The picture is from a movie called “Stardust.”

God might have made man from star-dust, or some other celestial substance, but he did not. Man was made from a very earthly material.

7And the Lord God formed a man’s body from the dust of the ground and breathed into it the breath of life. And the man became a living person.

Science agrees completely with this statement of man’s composition.A person of average weight contains enough fat for seven cakes of soap, carbon for 9,000 lead pencils, phosphorus for 2,000 match heads, magnesium for one dose of salts, iron for enough to make one medium sized nail, sufficient lime to whitewash a wooden fence, enough sulphur to rid one dog of fleas, and water enough to fill a ten-gallon can.Mankind is composed of these elements, all of which are found in the earth we live on.

But you could put all the soil elements together in the right proportions to make a man and still not have one.Only the Creator could combine all these elements and turn the inorganic into the organic.Man is a living miracle made by the all-wise God.He is the crowning work of creation on this earth, for he is made in the image of God (Genesis 1:26).

After God had combined the desired elements of earth to form man, that was still not enough.His creative energy must give life to the inert form.It took something more to make that body into a living soul – and that something more was the breath of life.

7And the Lord God formed a man’s body from the dust of the ground and breathed into it the breath of life. And the man became a living person (or soul).

Note that the Bible does not say that man received a soul; it says that man became a living soul or being.Life flowed from God into and through the complex threads of the nervous system; muscles expanded and contracted, the lungs went into action.With the “breath of life” in his nostrils, man became a “living soul”.According to Genesis 2: 7, it is possible to write a mathematical equation of man (math’s – very logical, just like Gods word):

Dust of the Earth PLUS Breath of Life EQUALS Living Soul

Man has a body, intelligence, memory, a mid to reason, a conscience, and a will.He has one personality and one character.He is one entity, not two or more (just as is God who created him).Just so long as man continues to breathe the breath of life, he will be a human being, a living soul.

So then, what is death?Death is the cessation of life.Let’s take the equation, and reverse it:

The Bible tells us very clearly, in plain language, that when a person dies:

4When their breathing stops, they return to the earth, and in a moment all their plans come to an end.

The same Hebrew word is translated both spirit and breath, as in Eccles 3:19.

At death, when the “spirit” or “breath of life” returns to God, and the body returns to “dust”, what happens to the soul?Does the soul continue?Is the soul an immortal entity?NO, emphatic NO!Ezekiel 18: 4, 20 tells us that the soul is not immortal; it can die.

4For all people are mine to judge—both parents and children alike. And this is my rule: The soul (or person) who sins will be the one who dies.

Death then is a blackout of spirit, soul and body.He, or she, who in life was a human being, a living soul, is in death only a corpse.The body returns to dust and the breath, or spirit, goes back to god.God has taken back from man the life He gave him at creation or at birth.The soul dies.

Think of a candle.It is perfect.It stands ready to give light, but it has no light of its own.We strike a match and light the wick.Then we have a lighted candle.Blow on the flame and it goes out.Where did it go?Out – that’s all.And with the passing of the flame, the light also goes out.

Men and women are like that candle.It takes divinely given energy, the breath of life, to light him – to make him a living soul.God “strikes the match” and man becomes a living soul.Intelligence shines out of that human being.But take the breath away from that person, and he or she dies.The light is snuffed out.The living soul perishes.The person’s body decays.The brain and nervous system no longer function.Intelligence can no more be a part of that person, than can the extinguished flame be a part of the candle.

On this earth, death comes to all forms of life.Animals and birds die just as man dies.Because of this, the atheist would have us believe that death is the end for eternity, that man is no better than the dumb animal.Other people would prefer to misinterpret the word of God, and have a vague wishful hope that somehow they live on after death.

The Bible denies any such teaching.Our Lord and Saviour, Jesus Christ, God’s only begotten son, announced in John 11:25

25…. “I am the resurrection and the life. Those who believe in me, even though they die like everyone else, will live again. 26They are given eternal life for believing in me and will never perish.

When death comes to a human being, that person goes to sleep in the grave.But in the records of the infinite God there is a complete picture – a Photostat – of the individual.God does not forget a single one of his created beings.

Job had confidence in God’s unerring memory and love for the people of his creation. Job expected to live again, the same Job as before his sleep of death began.

14If mortals die, can they live again? This thought would give me hope, and through my struggle I would eagerly wait for release. 15You would call and I would answer, and you would yearn for me, your handiwork.

Job looked for the time when God would bring him back to life in the resurrection:

25“But as for me, I know that my Redeemer lives, and that he will stand upon the earth at last. 26And after my body has decayed, yet in my body I will see God! 27I will see him for myself. Yes, I will see him with my own eyes. I am overwhelmed at the thought!

When Jesus comes again, the righteous will be raised.Man will breathe and live again.Those who have chosen Gods son as their Saviour, will rise to live again for eternity, for the promise of everlasting life.

How simple the story is.How simple the choice is – life or death.Not life on earth, then some other sort of existence.Quite simply, the theme of the Bible is Life or Death.

This morning we consider these emblems, and they remind us of this fact.But they also remind us of the one, God’s only son, who died in our place, but who rose as the first fruits from death, so that we might have everlasting life.

20But the fact is that Christ has been raised from the dead. He has become the first of a great harvest of those who will be raised to life again.

21So you see, just as death came into the world through a man, Adam, now the resurrection from the dead has begun through another man, Christ. 22Everyone dies because all of us are related to Adam, the first man. But all who are related to Christ, the other man, will be given new life. 23But there is an order to this resurrection: Christ was raised first; then when Christ comes back, all his people will be raised.