You are here: Home / Theology / Body and Soul / Mortal But Made in His Image 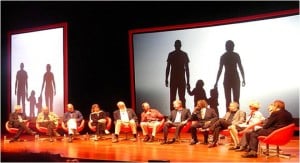 This is an outline of the second in a series of sermons I am preaching at my church on “Advent Christian distinctives” (Yes, I belong to the AC family of churches) focusing on biblical anthropology. This is probably the least distinctive of the AC distinctives, something around which there is a growing consensus in Christianity: that human beings are thoroughly mortal, though made in His Image.


A symposium of scientific experts at the 2008 inaugural World Science Festival in New York City addressed the question: What does it mean to be human? What (if anything) sets us apart from the animals?

Answers included such things as:

Turning to the Bible for our answers we will find that the word of God tells us that human beings are thoroughly mortal creatures though made in the image of God, mortal but made in His image.

1. A human being is a “living soul”, or sometimes, one who has “conscious life”.

The golden verse of biblical anthropology is Genesis 2:7. “The Lord God formed the man from the dust of the ground and breathed into his nostrils the breath of life, and the man became a living being [soul]”(Gen. 2:7). The primary meaning of the word soul is that of a breather, a breathing creature. Thus a soul is something we are rather than something we have. Sometimes the word soul is used in a secondary sense and can be translated “life”. Then it is appropriate to say  that a human being has “conscious life”.

In any case, whether the word soul is used of the creature as a whole or of the “life” that the creature has, the word soul is used four times of the animal creation before it is ever used of Adam. Thus God says, “Let the water teem with living creatures`” [living creatures = living souls] (Gen. 1:20, c.f. Rev 16:3). “So God created the great creatures of the sea and every living and moving thing  [“every living soul”] with which the water teems.” (Gen. 1:21). Living souls include “the livestock, creatures that move along the ground, and wild animals” (Gen. 1: 24). All “the beasts of the earth and all the birds of the air and all the creatures that move on the ground” are desribed as having “the breath [or the soul] of life” in them (Gen. 1:30).

So a human being is a “living soul”, or sometimes, one who has “conscious life”, but this we share in common with the animals.

2. A human being is a creature of dust.

Again, Genesis 2:7 tells us, “The Lord God formed the man from the dust of the ground and breathed into his nostrils the breath of life, and the man became a living being [soul]” (Gen. 2:7).

What is true of human beings is certainly true of the animal kingdom. “Now the LORD God had formed out of the ground all the beasts of the field and all the birds of the air.” (Gen. 2:19). “These [the animals] all look to you to give them their food at the proper time. When you give it to them, they gather it up;  when you open your hand, they are satisfied with good things. When you hide your face, they are terrified;  when you take away their breath, they die and return to the dust.“ (Psa. 104:27-29).

3. A human being is made alive by the breath or spirit of life from God.

Once more Genesis 2:7 says, “The Lord God formed the man from the dust of the ground and breathed into his nostrils the breath of life, and the man became a living being [soul].” (Gen. 2:7).

So Job says, “The Spirit of God has made me; the breath of the Almighty gives me life.” (Job 33:4). “If … he withdrew his spirit and breath … man would return to the dust.” (Job 34:14-15). Speaking of the Princes of men, David says, “When their spirit departs, they return to the ground”. (Psa. 146:4). Once again there seems to be no distinction here between humanity and the animal kingdom. So when God warned Noah of the coming Flood he said, “I am going to bring flood waters on the earth to destroy all life under the heavens, every creature that has the breath of life in it. Everything on earth will perish.” (Gen. 6:17). “Pairs of all creatures that have the breath of life in them came to Noah and entered the ark.” (Gen. 7:15). “Everything on dry land that had the breath of life [the breath of the spirit of life] in its nostrils died.” (Gen. 7:22).  And speaking again of the animals, David says, “When you send your Spirit, they are created and you renew the face of the earth.” (Psa. 104:29-30).

4. Human beings alone are the image of God.

5. We are to represent him and reign with him over Creation.

Genesis 1:28 says, “God blessed them and said to them, “Be fruitful and increase in number; fill the earth and subdue it. Rule over the fish of the sea and the birds of the air and over every living creature that moves on the ground.“ (Gen. 1:28).

Our creation as the image of God cannot be separated from our commission to rule over the earth and manage it on God’s behalf. As we shall see in future weeks humanity’s calling to rule the earth on God’s behalf has never been revoked!

6. Sin has corrupted this image but in Christ it is beingrestored.

So much more could be said here. For now it will suffice to say that while sin has corrupted the image of God in every human being is has not obliterated it.

In Genesis 9 God renewed his commission to Noah, “Be fruitful and increase in number and fill the earth. … they [ the animals] are given into your hands …  for in the image of God has God made man.“ (Gen. 9:1-2, 5).

James tells us, “With the tongue we praise our Lord and Father, and with it we curse men, who have been made in God’s likeness. Out of the same mouth come praise and cursing. My brothers, this should not be.“  (James  3:9-10). He says that we should treat others today on the basis that they are made in the image or likeness of God.

Now Christ is the exact and uncorrupted image of God (2Cor. 4:4, Col. 1:15). With this, and all that has already been said, in mind we can better understand what is said in Hebrews 2:5-9:

“It is not to angels that he has subjected the world to come, about which we are speaking. But there is a place where someone has testified:  “What is man that you are mindful of him,  the son of man that you care for him?  You made him a little lower than the angels; you crowned him with glory and honor  and put everything under his feet. In putting everything under him, God left nothing that is not subject to him. Yet at present we do not see everything subject to him. But we see Jesus, who was made a little lower than the angels, now crowned with glory and honor because he suffered death, so that by the grace of God he might taste death for everyone.” (Heb. 2:5-9).

God created humanity in his image to have dominion over the earth. We do not at present, because of sin, see humanity having dominion under God. But we do see Jesus, made man for us, even tasting death for us, on the cross, now raised and ascended to heaven, “crowned with glory honour”. The good news or gospel is that through believing in Christ’s message and in his death on our behalf we are made fit to fulfil our destiny as people made in the image of God: Will will reign in the world to come!