You are here: Home / Theology / Body and Soul / Lessons From a Dead Bird: Creation, Destruction, and Salvation 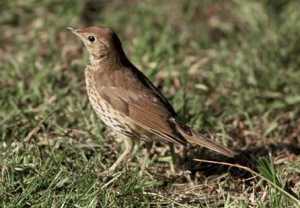 A friend of mine wrote the following piece on his blog site Explaining the Bible.

Yesterday I found a thrush that had clearly only just died, apparently after flying into a solid object. It was going to cause problems if left where it was, so I moved it and in doing so began to think about what could be learnt from this situation. For me, what could be learnt boiled down to three things: creation, destruction, and salvation.

The first thing I noted was the light weight of the bird, far less than you’d expect for something of that size: if you think of a piece of polystyrene or dry foam you’ll get the general idea. Aircraft designers go to extreme lengths in their attempts to emulate this feature but are unsuccessful in comparison. I also noted the weatherproof feathers on the body, which were incredibly complex and obviously essential for survival because they had kept the bird warm and dry. I marveled at the flight feathers on the wings, and wondered how such a seemingly flimsy structure could lift and propel the bird. I could see the wing bones beneath the skin, much thinner than a match, and was amazed that they were strong enough to carry the immense forces involved in flight.

To me, this thrush was a near-perfect flyer of irreducible complexity. A bird may survive with only one leg, but basically it’s got everything it needs to flourish and no more: take away any of its features and it will die. How evolutionists imagine that birds evolved from reptiles I don’t know: take any reptile, put it next to a thrush, and you’ll see what I mean. If in doubt, do some reading about their design features¹.

When I looked at that thrush I could see clear evidence of a designer, and that designer tells me that birds have always been birds:

Then God said, “Let the waters teem with swarms of living creatures, and let birds fly above the earth in the open expanse of the heavens.” God created the great sea monsters and every living creature that moves, with which the waters swarmed after their kind, and every winged bird after its kind; and God saw that it was good. God blessed them, saying, “Be fruitful and multiply, and fill the waters in the seas, and let birds multiply on the earth.” (Gen 1:20-22 NASB)

The death of this bird is a symptom of the curse of sin that all of creation is under, and I thought about how that curse means that you and I buy weed spray, suffer and die².

As I disposed of the bird I thought of the God’s provision of organisms that break down organic matter and spare us from having a messy planet. Soon all trace of the thrush that I found will be gone, and this led to me thinking about that fate of the wicked as described in Jude 1:7:

In a similar way, Sodom and Gomorrah and the surrounding towns gave themselves up to sexual immorality and perversion. They serve as an example of those who suffer the punishment of eternal fire. (NIV)

What happened to Sodom and Gomorrah? They went up in smoke, and no trace of them remains. So will be the fate of the wicked.

…whoever believes in Him shall not perish, but have eternal life.³ (John 3:16b NASB)

Revelation 21:1-4 tells us what life will be like when we receive our eternal rest:

Then I saw a new heaven and a new earth; for the first heaven and the first earth passed away, and there is no longer any sea. And I saw the holy city, new Jerusalem, coming down out of heaven from God, made ready as a bride adorned for her husband. And I heard a loud voice from the throne, saying, “Behold, the tabernacle of God is among men, and He will dwell among them, and they shall be His people, and God Himself will be among them, and He will wipe away every tear from their eyes; and there will no longer be any death; there will no longer be any mourning, or crying, or pain; the first things have passed away.” (NASB, emphasis added)

I won’t be finding any dead thrushes on the new earth. Destruction will have ceased, leaving only creation and salvation. I hope that you too will see this new earth and meet the Designer of Thrushes face to face.