You are here: Home / Theology / Exploring Conditional Immortality / The Hope of The Righteous (Part 1)

This is the fifth of a series of sermons I am preaching at my church. This one is entitled, The Hope of The Righteous: The Kingdom of God on Earth! (Part 1). It is less directly related to Conditional Immortality – and I know not all conditionalists agree with the main thesis: that the hope of the righteous is still a resurrection to eternal life in the kingdom of God on earth. It does however show that nowhere in the Old Testament are the righteous told to hope for “heaven at death.”

1. The “kingdom” when it refers to God’s sovereign rule over the universe exists from all eternity.

“The Lord has established his throne in heaven and his kingdom rules over all” (Psa. 103:19).

2. God’s plan was (and still is) to manifest his kingdom rule on earth through Adam and his kin.

To Adam and Eve God said, “Be fruitful and increase in number; fill the earth and subdue it. Rule over the fish of the sea and the birds of the air and over every living creature that moves on the ground.” (Gen. 1:26-29).

Even after the fall, God did not abandoned his plan. Rather he promised that one would come, “the seed of the woman”, to win back humanity’s birth right:“And I will put enmity between you and the woman, and between your offspring and hers; he will crush your head, and you will strike his heel” (Genesis 3:15).

So to Noah God gave the same commission as to Adam: “[God said], “Be fruitful and increase in number and fill the earth. The fear and dread of you will fall upon all the beasts of the earth and all the birds of the air, upon every creature that moves along the ground, and upon all the fish of the sea; they are given into your hands. Everything that lives and moves will be food for you. Just as I gave you the green plants, I now give you everything” (Gen. 9:1-3).

Nowhere here is there any hint that Adam or his kin were ever promised that they would go to heaven when they die. Rather, Adam was promised (conditional upon his obedience to God) the chance to take from the fruit of the “tree of life” and live forever on a paradisical earth.

3. God promised Abraham that his children by faith would inherit the Land.

The LORD had said to Abram, “Leave your country, your people and your father’s household and go to the land I will show you.”I will make you into a great nation and I will bless you; I will make your name great, and you will be a blessing. I will bless those who bless you, and whoever curses you I will curse; and all peoples on earth will be blessed through you.” (Gen. 12:1-3).

There is here a threefold promise of Land, Seed (or descendants) and Blessing.

Later Paul tells us, ”Abraham and his offspring received the promise that he would be heir of the world” (Rom. 4:13).

As to the hope of the righteous, the writer to the Hebrews tells us that Abraham believed in the resurrection: “Abraham reasoned that God could raise the dead, and figuratively speaking, he did receive Isaac back from death” (Heb. 11:19). Again, we have no hint that Abraham or any of the chosen family believed in “heaven when you die.”

4. Israel was to be a kingdom of priests and a holy nation.

Through Moses, Israel was told: “Now if you obey me fully and keep my covenant, then out of all nations you will be my treasured possession. Although the whole earth is mine, you will be for me a kingdom of priests and a holy nation” (Exodus 19:5-6). Again no hint of heaven at death for the chosen people.

So it continues under Joshua and the Judges. God’s promise to the righteous is life in the Land.

God made this promise to David: “I declare to you that the LORD will build a house for you: When your days are over and you go to be with your fathers, I will raise up your offspring to succeed you, one of your own sons, and I will establish his kingdom. He is the one who will build a house for me, and I will establish his throne forever. I will be his father, and he will be my son. I will never take my love away from him, as I took it away from your predecessor. I will set him over my house and my kingdom forever; his throne will be established forever.” (1Chr. 17:10-14).

Again, there are three aspects to this promise:

The promise centred around Jerusalem and David’s earthly kingdom. There is nothing said of heaven when we die.

After Solomon the Kingdom was divided. The people fell away from God. The Lord sent Assyria  to conquer Israel (c. 725 BC) in the north and Babylon to conquer Judah (c. 585 BC) in the south. The “Times of the Gentiles” had begun.

6. The prophets still looked toward a worldwide empire under God. 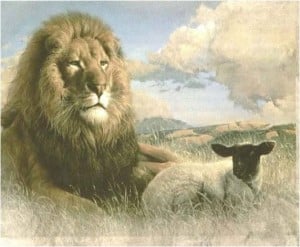 Isaiah said, “The wolf will live with the lamb, the leopard will lie down with the goat, the calf and the lion and the yearling together; and a little child will lead them. The cow will feed with the bear, their young will lie down together, and the lion will eat straw like the ox. The infant will play near the hole of the cobra, and the young child put his hand into the viper’s nest. They will neither harm nor destroy on all my holy mountain, for the earth will be full of the knowledge of the LORD as the waters cover the sea.” (Isa. 11:6-9).

Daniel too had a vision: “In my vision at night I looked, and there before me was one like a son of man, coming with the clouds of heaven. He approached the Ancient of Days and was led into his presence. He was given authority, glory and sovereign power; all peoples, nations and men of every language worshiped him. His dominion is an everlasting dominion that will not pass away, and his kingdom is one that will never be destroyed. (Daniel 7:13,14).

This kingdom is what became known as the “kingdom of God.”

Daniel goes on: “Then the sovereignty, power and greatness of the kingdoms under the whole heaven will be handed over to the saints, the people of the Most High. His kingdom will be an everlasting kingdom, and all rulers will worship and obey him.” (Daniel 7:27).

As you might now be beginning to expect, there is no hint here of heaven when you die. The saints are destined to reign with Messiah in his kingdom.

The Jews did return to the Land in 539 BC but this was in no way the promised restoration of the kingdom.

Nehemiah, having returned to the Land, prayed: “But see, we are slaves today, slaves in the land you gave our forefathers so they could eat its fruit and the other good things it produces.  Because of our sins, its abundant harvest goes to the kings you have placed over us. They rule over our bodies and our cattle as they please. We are in great distress.” (Nehemiah 9:36-37).

They were still waiting for Messiah and his kingdom to come.

No wonder there was much excitement when Jesus arrived saying, “Repent for the Kingdom of God is near.” (Matthew 4:17).