You are here: Home / Theology / Heaven | Afterlife / What is the Fate of the Wicked? 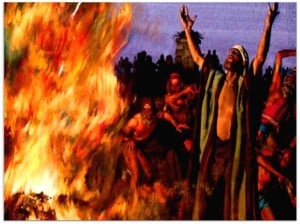 Notes from the fourth in a series of sermons I am preaching at my church (audio to follow next week).

“Hell is Manhattan at rush hour!”, said Woody Allen. John Paul Sartre suggested that “hell is other people”. Many Christians belive that hell is the devil’s headquarters, and a place of unending conscious torment for the wicked.

On the other hand, Anglican theologian Tom Harpur, in his book “Life After Death”, says that the idea of hell is

“so naive that the average thinking person can easily conclude the whole subject is one for children and for lovers of pure fantasy . . . . There are few ideas in the entire history of religion that have caused more misery, cruelty and misunderstanding than the concept of a fiery hell.”1

What does the Bible say is the Fate of the wicked?

1. The wicked will be raised to face the judgment.

Daniel tells us, “Multitudes who sleep in the dust of the earth shall awake: some to everlasting life, others to shame and everlasting contempt”(Dan. 12:2). Paul affirmed that “… there will be a  resurrection of both the righteous and the wicked” (Acts 24:15). In saying this he was only saying what Jesus said: “… those who have done good will rise to live and those who have done evil will rise to be condemned” (John 5:29). But what is the nature of that condemnation?

2. God has already judged the world and made of the wicked an example.

The first Old Testament example of judgement is Noah’s flood. Jesus warned, “For in the days before the flood, people were eating and drinking, marrying and giving in marriage, up to the day Noah entered the ark; and they knew nothing about what would happen until the flood came and took them all away. That is how it will be at the coming of the Son of Man” (Mat. 24:38-39). When the flood came and “took them [the wicked] all away”, they perished in a watery grave. they were not tormented for eternity.

3. The Old Testament language used to describe the fate of the wicked is the language of destruction.

In verses too numerous to list, it is said of the wicked that:

Using the image of the cup of God’s wrath the prophet says, “Just as you drank on my holy hill, so all the nations will drink continually; they will drink and drink and be as if they had never been” (Obadiah 1:16). Yet another prophet says, “… the wicked … will be ashes under the soles of your feet …” (Malachi 4:3).

This is the language of utter destruction, but not of eternal torment.

4. New Testament language used to describe the fate of the wicked is also the language of destruction.

John the Baptist said, “Every tree that does not produce good fruit will be cut down and thrown into the fire” (Matthew 3:10). John was speaking of Jesus when he said: “He will baptize you with the Holy Spirit and with fire. His winnowing fork is in his hand, and he will clear his threshing floor, gathering his wheat into the barn and burning up the chaff with unquenchable fire” (Matthew 3:11-12). This is the language of destruction, but it is not the language of eternal torment.

Jesus himself said that “… anyone who says, [to his brother] ‘You fool!’ will be in danger of the fire of hell” (Matthew 5:22). But he does not here define the fire of hell. Later, Jesus said, “Every tree that does not bear good fruit is cut down and thrown into the fire” (Matthew 7:19). Again, trees that are thrown into fire are consumed not tormented for eternity.

Disturbingly, Jesus warned, “And if your eye causes you to sin, pluck it out. It is better for you to enter the kingdom of God with one eye than to have two eyes and be thrown into hell, where ‘their worm does not die, and the fire is not quenched” (Mark 9: 47-48). This too, however, is the language of destruction. Jesus is quoting from Isaiah where he said, “And they will go out and look upon the dead bodies of those who rebelled against me; their worm will not die, nor will their fire be quenched, and they will be loathsome to all mankind” (Isa. 66:22-24).

This is not a picture of immortal souls in torment. The “undying worm” and the “unquenchable fire” consume the corpses of the wicked.

This is a fearful threat of righteous judgement but not the obscene and illogical notion of eternal torment.

5. The wicked will die a “second death.”

The final end of the wicked will be complete destruction, to die a “second death” (Rev. 2:11, 20:14). If death is death (as we saw last week), then the “second death” must surely involve the cessation of life.

6. A few obscure texts should not be allowed to overwhelm  the majority.

One text often used in support of eternal torment is Revelation 20:10.

Note the following however: