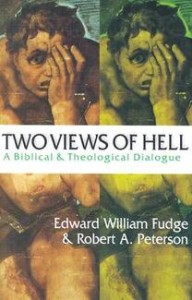 Review of Two Views of Hell: A Biblical and Theological Dialogue By Edward William Fudge and Robert A. Peterson.

This book was published by InterVarsity Press this year not long before Edward Fudge came to New Zealand. By giving equal space to the conditionalist and traditionalist understandings of hell IVP have granted ‘our’ interpretation long overdue recognition as at least a viable, biblical alternative. We congratulate the publishers and authors for this significant step.

This book will serve the conditionalist cause well not only because of the strength of the biblical arguments but also because of the grace and humility with which Fudge writes. Sadly this cannot always be said for Peterson who begins his response to Fudge with an emotive description of his students reacting to The Fire That Consumes with “physical symptoms including headaches and churning stomachs.” On occasion, he gets perilously close to a personal attack as much as discussing the doctrines involved. He does concede however that in many ‘other’ matters of biblical interpretation Fudge is competent and sound.

The major weakness of Peterson’s portion is, however, his failure to present a solid biblical case for the traditionalist view. He opens with an appeal to 11 theologians from Tertullian in 208AD through to Millard Erickson in 1985. He points to their diversity in time and background; their significance in Church History and their agreement on the doctrine of everlasting, conscious torment for the unsaved. He concludes “This consensus leads us to ask an important question: Is it possible that these eleven figures are wrong on the topic debated in this book? It is possible but highly unlikely! In fact, I cannot think of even one doctrinal issue in which they all are in error.” (p127, emphasis original) While we cannot dismiss church history lightly, and certainly not these particular men, it is an unfortunate place to start. The real issue is not whether these men agreed but whether they were biblical. Incidentally, Robert Peterson himself appears to disagree with the eleven on a related matter. I would think, without actually researching it, that most, if not all eleven taught hell as a place of literal punishment by fire. Peterson writes “I understand hellfire figuratively rather than literally” (p147). If these eleven are ‘wrong’ on this surely they might just be wrong on another aspect also.

In his second chapter, Peterson turns to Scripture but again rather than present a strong biblical case for the eternal conscious torment he seems to be more focused on trying to disprove conditionalism, or more particularly The Fire That Consumes. In fact, throughout the book, his case seemingly revolves around one point which he repeats no less than 10 times! (pp103, 107, 109, 110, 111, 120, 139, 142, 145, 168). Peterson’s argument involves a link between Matthew 25:41 and Revelation 20:10. His reasoning goes like this: Matthew 25:41 records Jesus saying to “those at his left hand … ‘Depart from me into the eternal fire prepared for the devil and his angels.’” Revelation 20:10 says, “The devil … was thrown into the lake of fire and sulfur, where the beast and the false prophet were, and they will be tormented day and night forever and ever.” Therefore, according to Peterson, it is clear that unsaved humans will be tormented forever. But even if we were to take Rev. 20:10 literally Peterson’s case remains unproven. Yes, they will all be thrown into the same lake (which of course Peterson doesn’t believe is literal) but there is no indication that human beings will be tormented forever and ever, they could just as easily be destroyed. Their shared fate is being thrown into the fire, not eternal torment.

Another point that Peterson labours (pp 94-95; 122-123; 150-152; 160; 165) is that ‘separation’ from God (2 Thess. 1:9; Matthew 25:41) doesn’t mean total separation (because that would necessarily involve annihilation, as Peterson acknowledges on p152). Instead, it means being “separated from the presence of his joy, not from his omnipresence.” (p95) This involves the necessity of Christ being (eternally?) present in hell. Peterson writes, “Although not many Christians conceive of Christ’s being present in hell, he is there.” (p160, based on Rev. 14:10). No wonder not many Christians conceive of this, it is but one example of the traditionalist position robbing God of ultimate and final victory (1 Cor 15:28) and turning him into some sort of monster who must keep his victims alive in order to torture them.

One point emerging from Peterson’s work is the necessity for both ‘sides’ of the debate to come to terms with the grounds for literal vs figurative interpretation. From my bias (which I freely acknowledge) it appears that Peterson takes a considerable number of scriptures and statements figuratively, while insisting on a relatively literal understanding of passages such as ‘The Richman and Lazarus’ (p172) and criticizing Fudge of taking some passages too literally (e.g. p133 regarding Isaiah 66, and p156 regarding Jude 7 and 2 Peter 2:6). I am not saying that the conditionalist side doesn’t do similarly at times, just that it is an area needing further investigation as both sides could be accused of taking things literally or figuratively to suit, rather than on a more objective basis.

Overall this book makes a strong case for conditionalism and as one friend commented after reading it, “If this is the best the traditionalists can do then we (conditionalists) have nothing to worry about.” Two minor points need to be noted. The Scripture index at the back of the book appears to be out by one-page number ((i.e. if the index refers to say p120, try looking for it on p121). The second point is that Fudge makes a couple of mistakes, which he freely acknowledges and will amend in the next edition. These are: p22, referring to Socrates as Plato’s student (it should be the other way around) and p45, where he indicates two occurrences of the Hebrew word for punishment by death are 1 Sam. 25:31 and Ezekiel 21:15. Actually, they don’t have the word and the references he supplies instead is from the Apocryphal writing in the Greek Old Testament (LXX), Wisdom of Solomon 19:4 and 2 Maccabees 4:38.