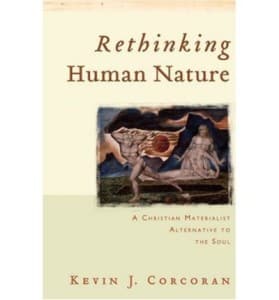 Kevin J. Corcoran begins what is a philosophical book with a very personal reflection: “In 1968 I lost my father to cancer,” Corcoran recalls. “I was four years old. I can still remember the funeral home. And I can remember that as I looked into the casket, my mother told me that my father was now with God in heaven. I remember feeling perplexed. And why not? My father was lying lifeless before me. How could he be with God in heaven?”

He goes on to say, “I came to understand that my mother believes what most Christians have believed down through the centuries: humans are immaterial souls capable of disembodied existence.” Corcoran, however, no longer holds his mother’s point of view. In fact, he flatly denies that human persons like you and me have any immaterial “soul”. Corcoran rightly says that both Christian tradition and Christian doctrine, with respect to the afterlife, emphasise the resurrection of the body not the immortality of the soul.
“None of the Ecumenical Creeds of the Church confesses belief in a doctrine of soul survival,” he says. “No, the Christian doctrine regarding the afterlife is a doctrine of resurrection.” From a philosophical point of view the notion of the resurrection of the body is no more difficult to comprehend than that of soul survival. “Both dualists and materialists have the problem of telling a coherent story about how a body that peters out and ceases to exist can somehow turn up in the New Jerusalem,” he says.
What sets Corcoran’s treatment apart from other discussions of biblical anthropology is the emphasis he places on the moral implications of his views in the here and now.
“A materialist view of human nature,” he says, “makes good sense of the urgency and importance of our call to feed the hungry, clothe the naked and pursue justice. Why? Because we are material beings; starvation, want and physical impoverishment are kingdom concerns. Contrary to the sacred hymn, this world is our home. It is broken, disfigured and diseased to be sure, but it matters to us. It matters to us because we are created for this world in all of its physicality.”
While scholars debate the nature of humanity the question, What makes us human? is not only of academic interest. End-of-life ethical decisions, human cloning, fetal tissue transplants, and stem cell research make this an issue of utmost importance to ordinary people. Corcoran’s view — called the “constitutional view”— suggests that we are constituted by our bodies without being identical to them. A building is constituted of bricks and mortar yet is not mere bricks and mortar. A statue is constituted of marble yet is not mere marble. So too, a human being is constituted of a animal body but is no mere body. It has been suggested that Cocoran’s view is morally flawed; that by reducing human beings to the level of “mere animals” he destroys any rational ground for maintaining the sanctity of human life — especially at the margins, where a fetus or a person in a persistent vegetative state exhibits none of the capacities we normally associate with “personhood” and which many claim distinguish a human being from an animal.
In discussing abortion, however, Corcoran argues that the opposite is true. As a “potential person” and a member of the human family the fetus deserves protection. But if the “soul” continues to exist after the demise of the organism it animates; and the “soul” carries with it the identity of the person; then abortion does not end the life of a “person” or “potential person”. What grounds have we for saying abortion is wrong? The materialist viewpoint is thus, in fact, the better starting point from which to build an “ethic of life”.
Corcoran concludes that anthropology alone is insufficient to ground an “ethic of life” (other theological ideas come into play as well) but a materialist anthropology is superior to the dualistic alternative in that it does more to connect the philosophy of human nature with the great themes of Biblical theology: themes such as Creation, Incarnation, the New Creation and the Resurrection; all of which reaffirm God’s commitment to this material world and embodied life. I am inclined to agree.