You are here: Home / Book Review / A Summary and a Review Of What About The Soul? 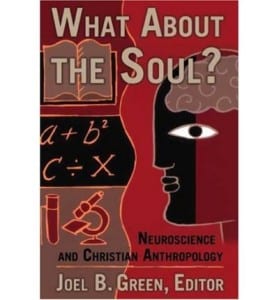 What About The Soul? : Neuroscience and Christian Anthropology Edited By Joel B. Green.

Modern neurological research is challenging the traditional concept of a “soul” or a “spirit” separable and distinct from the body and/or the mind. In light of these discoveries, this book explores such fundamental questions as, Who am I? What am I doing here? Why do I do what I do? What does it mean to be saved? How am I responsible for my behaviour? What is the meaning of resurrection? and What happens when I die?

Turning first to science, after an introduction by Joel Green, Malcolm Jeeves looks at how modern neuroscience has impacted upon our understanding of what it means to be human (chapter 2). Over the last three centuries, at least among philosophers, talk of the “soul” has changed to talk of the “mind”. The last 100 years has forged an ever-tightening link between “brain” and “mind”. Aspects of personality, once seen as attributes of the “soul”, are found to be closely related to the activity of the brain. Jeeves concludes: “The take-home message is that any view of human nature that fails to recognise the psychosomatic unity of the person is a view that cannot be defended from science.” (p30).
D. Gareth Jones likewise takes a scientific approach (Chapter 3). He looks at neural plasticity (our brains are changing), and behavioural genetics and concludes that while there are biological and physical limits to
human capacities, the environment and moral choices play the larger part in shaping who we are and who we will be as persons. Jones concludes that the “neurobiological portrait” of the human person “is entirely consistent with Christian emphases on the wholeness and coherence of the person.” (p46).

The Soul: Possession, Part or Person (What Is A Human Being?)

Lawson G. Stone (Chapter 4) turns to the Scriptures to answer the question, what of the soul? The opening chapters of Genesis provide a wealth of information from which we derive a biblical doctrine of humanity. The pivotal text is Genesis 2:7. “Adam” (not just his body) was formed “of the dust.” God breathed into his nostrils “the breath of life”. As a result Adam became “a living soul”. Adam does not have a soul. He is a living soul.
Adam has much in common with the animals. They are of the earth (Gen. 1:24). They have the breath of life (Gen. 6:17; 7:15,22). They are living souls (Gen. 1:21, 24, 30). Stone concludes: “No exegetical justification exists for finding here the notion of abstract, immortal, disembodied personhood that we usually mean when we speak of the “soul” (p59).
This does not reduce humanity to the level of brute beast. It does, however, recognise that physicality is a vital element to human existence. It is wrong to distinguish the “physical” from the “spiritual”. The fate of all creation hinges on human destiny; a truly human person is a social person; humanity stands responsible to obey God’s word and is called to be his “image” before creation, but none of this requires an “immortal soul” or “substance dualism”. Neuroscience then, far from undermining Christian belief, encourages a closer reading of the text and supports the biblical view of human personhood. Patrick D. Miller also seeks to answer biblically the question, What is a human being? (Chapter 5). Looking at Psalms 8 and 144, at Job, and at Jesus in Hebrews 2, Miller concludes, “What therefore is to be said about the human cannot be confined to general statements about humanity apart from God. It cannot be said apart from the discovery that in Jesus Christ we see who we are and we also see God for us.” (p 73).
Bill Arnold (Chapter 6) admits that a cursory reading of 1 Samuel 28 may suggest that Samuel’s disembodied “soul” was present at Endor. If so this would undermine the view of humanity presented throughout this book. Arnold notes, however, that many ancient authorities assumed that the figure at Endor was not Samuel at all, but a demonic apparition. Others indeed argued that Samuel was really present. Among this latter group some saw in this text evidence of the survival of the “soul”, others said Samuel was in fact resurrected by God. Thus nothing in this (or in any other) passage contradicts the “monist anthropology” derived from modern neuroscience.

What About The Soul? The Resurrection of The Body

Are Scripture and the new science compatible as regards the hope of a life to come?
Green (Chapter 7) begins by asking, what might the resurrection of the body entail? And if I have no immortal soul, how might the continuity of my personal identity from death to life after death be guaranteed? In answer to these questions, Green summarises the teaching on resurrection found in Israel’s Scriptures – in Hosea 6:1-3, Ezekiel 37:1-14, Isaiah 26:19 and Dan.12:1-3. The resurrection signals the end time restoration of Israel and her victory over her enemies. It is the time of reward and punishment. It embraces a view of the person as a psychosomatic whole and rejects any notion of salvation as an “immortal soul” being liberated from a mortal body.
The post-resurrection appearance of Jesus, in Luke 24:36-39, confirms that Jesus was no immaterial ghost. And in 1Corinthians 15 Paul is explicit concerning the need for a body suited for life-after-death. From the interface of neuroscience and theology, Green draws a number of conclusions regarding resurrection and personal identity. It is problematic, he says, to speak of human identity in purely physical terms. Throughout our lives, our bodies are in a state of flux. Our identity consists not only in our physicality alone but also in a network of relationships and in our “story”. Death is not only the end of one’s body, it is the severing of relationships and the end of one’s story. No aspect of our personhood survives death. Resurrection then is a work of God by which, not only are we reembodied, but relationships are re-established and our stories continued. This introduces a corporate aspect into our understanding of resurrection.
In an excursus, in answer to the question, where was Jesus between Friday afternoon and dawn on Sunday Green suggests that he was “with God.” This seemingly non-conditionalist conclusion needs to be seen in the light of the discussion of time and eternity in Chapter 9.

What About The Soul?  Emergent Dualism, Time and Eternity

William Hasker (Chapter 8.) and Charles E. Gutenson (Chapter 9) are of a philosophical bent. Hasker argues for an “emergent dualism” by which he means that the mental individual, like a field of consciousness”, is generated or emerges from the organism and is sustained by it. It is not (as in traditional dualism) that some other thing has been “added to” the organism from outside. This philosophical “emergent dualism” lends itself to a doctrine of human mortality exactly as we find in Scripture.
Any discussion of an intermediate state between death and resurrection presupposes a particular view of the nature of time and eternity. Gutenson (Chapter 9) outlines three such views. The “common sense” view supposes God to inhabits time as we do, though he “knows” past, present and future. The Augustinian view supposes God to inhabit a realm outside of time from where he observes all of time as a whole. Gutenson argues for a third option, called the “eternalist position”, which has God actually inhabit all time at once. God’s experience of time differs from ours. To God the General Resurrection is as present as the moment of our death. From God’s perspective (and from the perspective of “the dead”) there is no intermediate state and hence no difficulty in God preserving one’s personal identity through the very real experience of death.

What About The Soul?  Pastoral Care, Mission and Counselling (Without a “Soul”)

Michael A. Rynkiewich (Chapter 10) argues that a “monist” view of persons makes a theology of missions more holistic, more incarnational and more naturalistic. For too long the Great Commission has been reduced to “preaching the gospel” and “saving souls”. A wrong-headed dualism has separated evangelism from social justice. Saving souls is saving bodies. Yet, a human person is not just a body, but a body-in-relationship. Conversion is not the saving of individual bodies (much less the saving of “disembodied souls”), it is the establishing of a new relationship with God, his people and the environment around about us – all in
Christ.
Both, Virginia T. Holeman (Chapter 11) and Stuart L. Palmer believe that different ideas of personhood affect a pastor’s approach to care and counselling. “Reductive materialism” (we are nothing but bodies), “radical dualism” (the real ‘you’ is the immaterial bit within), and even “holistic dualism” (we are made up of two bits, ‘body’ and ‘soul’ which belong together) are to be rejected in favour of some form of “emergent monism” (We are whole persons, including our body, from which emanates what we call ‘mind/soul’). Such monism eliminates unhelpful distinctions between body/soul and physical/spiritual. Both authors note that modern neuroscience stresses the importance of the self in relation to others. Holeman quotes studies showing that relationship factors (40%) are much more important in counselling than the theoretic orientation of the counsellor, or the techniques employed (15%). This emphasis on relationship is consistent with all that has already been said regarding the human person. When we are seeking to bring a person into a relationship with God, his people and the world around us – weaving our stories into God’s big story – we are putting the “Christian” into counselling.

What About The Soul?  What To Make of It All

This is not a big-word-free book. Many will struggle to understand the science and philosophy which pervades this book. For those willing to work, the results are worth it. Those of us who hold a conditionalist understanding of the human person will be encouraged to note that this is not another instance of pseudo-Science and Scripture on a collision course, but rather a clear example of the book of Nature and the book of the Bible being read in perfect harmony. This should encourage us in our faith. The emphasis on relationships and “storytelling” found throughout the book should remind us that we are about more than imparting knowledge and asking people to edit the “immortal soul” out of their personal creed. We are seeking to impart to fellow Christians a holistic, incarnational, naturalistic, vision of our mission as the Church and to bring people into an eternal relationship with God, his people and the creation / new creation around us – again, weaving our stories into God’s big story!