You are here: Home / Book Review / Body Soul and Human life : The Nature of Humanity in the Bible by Joel B. Green | Book Review 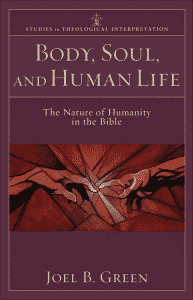 Joel B. Green (PhD, University of Aberdeen) is now professor of New Testament interpretation at Fuller Theological Seminary in Pasadena, California, after teaching at Asbury Theological Seminary for ten years, serving as vice president of academic affairs and provost. He is the author and editor of many books, including Dictionary of Jesus and the Gospels, Introducing the New Testament, and commentaries on Luke and 1 Peter.

This is not, however, what he is most remembered for in our family. Our Association brought Dr Joel and Pam Green to New Zealand in September of 2005. The late Carl Josephson, who had organised the trip, was not well enough to tour with Joel, so I reluctantly (because my wife was pregnant and due to give birth while Joel and Pam were here) volunteered. By the providence of God, our baby boy arrived early (the only one of our eight children that arrived early). To remember the circumstances we named our boy Timothy Joel Burge and I got to spend a wonderful few weeks with Pam and Joel.

Once again, Joel has combined his extensive knowledge of biblical theology with his equally thorough grasp of the science of the brain to produce a volume that will be of interest to all Conditionalists. Some theologians have seen “that the encounter of long-held theological tenets regarding the human person with the principled reflection on neuroscientific innovation is a major storm brewing on the horizon” (p.16). Doctor Green’s list (found on page 20) of what may be at stake includes the following:

As you can see, Dr Green goes beyond “biblical anthropology”, exploring what Scripture and theology teach about such wide-ranging issues as, the importance of community, sin, free will, salvation, and the afterlife.
As he has done previously1, Green argues that a dualistic view of the human person is inconsistent with both science and Scripture. Those neuroscientists who claim that modern research has undermined the Bible and the Christian worldview are going beyond what is justified by the data. Doctor Green notes that it is often alleged that neuroscientists, in having discredited a dualist interpretation of the human person, have also discredited biblical faith. Not so, Green says. A monist account of human nature is entirely consistent with both the Bible and science. Green’s analysis shows that though the two branches of knowledge often come at the same questions from very different perspectives, rightly understood; these perspectives are complementary, not conflicting.

The book is not for the fainthearted, in that it has a lot of “big words” and even bigger ideas, but as you can see, the list of questions asked, and at least partially answered, makes the book well worth reading.