You are here: Home / Resurrection : An International Magazine / Portraits of Hell 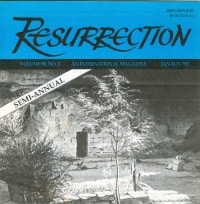 PORTRAITS OF HELL BY THOSE WHO TEACH PERPETUAL TORTURE OF THE LOST from Resurrection Volume 96 No.1 Jan – Jun 1993

The Reader will note the strong similarity between the two descriptions given below, the one by Romanism in the Middle Ages and the second by the New England Puritan, Jonathan Edwards, about 1750. Even more important to note is the total absence of supporting scripture in both, and the fact that Edwards rather than Rome, attempts to justify the placid contemplation by saints in heaven of those being tortured below!

From “The History of Western Civilization”, v.l, p.357, byH.E.Bames, 1935, in chapter titled” A New Rome Arises: the Christian Church Adjusts Man to the Supernatural”

” To understand the power of the Christian Church of the Middle Ages…(one needs) to comprehend the medieval version of the horrors …of hell, from which the Church alone could save man. The following is a good…portrayal of the medieval view of Hell and its tortures: Hell is wide without measure, and deep and bottomless; full of incomparable fire, for no earthly fire may be compared there with; full of stench intolerable for no living thing on earth might endure it; full of unutterable sorrow for no mouth may, on account of the wretchedness or the woe thereof, give an account nor tellof it. Yea, the darkness there in is so thick; that one may grasp it, for the fire there gives no light, but blindeth the eyes of them that are there with as mothering smoke, the worst of smokes. And nevertheless in that same black darkness they see black things as devils, that ever maul them and afflict and harass them with all kinds of tortures; and tailed drakes. Horrible devils, that devour them whole and spew them out afterwards before and behind. At other times they rend them in pieces and chew each gobbet of them, and they afterwards become whole again. Such as they previously were, to under go again such pale without recovery,and full well they see themselves very horrible and dreadful; and to increase their pains the loathsome hell-worms, toads, and frogs that eat out their eyes and nostrils, and adders and water-frogs, not like those here, but a hundred times more horrible, sneak in and out of the mouth, ears, eyes, navel and at the hollow of the breast, as maggots in putrid flesh, ever yet thickest. There is shrieking in the flame and chattering of teeth in the snowy waters. Suddenly they flit upon the heat into the cold, nor ever do they know of these two which is worst for them, for each is intolerable …. And this same wan hope is their greatest torment, that none have any more hope of any recovery, but are sure of every ill, to continue in woe, world without end, even in eternity. Each chokes the other, and each is another’s torment, and each hateth an other and himself as the black devil; and even as they loved them the more in this world, so the more shall they hate them there. And each curseth another, and gnaws off the other’s arms, ears, and nose also. I have begun to tell of things that I am not able to bring to any end, though I had a thousand tongues of steel, and told until they were all worn out.

“…The woes of sinners in hell will not be a cause of grief to the saints in heaven,- but of rejoicing. This…will be the fruit of an amiable disposition, a perfect holiness, and a conformity to Christ. At the Judgment you maybe ready to fly to some godly friend, but you will see them unconcerned for you, with joy ascending to meet the Lord, and not less joyful for the horror in which they see you. When they hear you groan and sigh and gnash your teeth, these things will not move them to pity you. After your godly parents shall have seen you lie in hell millions of years …in torment day and night, they will not begin to pity you then. They will praise God for His justice in the eternity of your misery. The torments in hell will be immeasurably greater than in a glowing oven, brick kiln, or furnace”

And discussing a sermon by Edwards in April, 1734, Gerstner says: