Resurrection in the Epistles- Part 1

We find God described in Rom. 4:17 as “God, who quickeneth the dead” or as the N.I.V. translates it, “the God who gives life to the dead”. The New Bible Commentary says, “God’s life-giving power is seen in the miracle of Abraham’s procreation of Isaac (19; cf. Heb. xi. 12, ‘and him as good as dead’), by the deliverance of Isaac upon the sacrificial altar (cf. Heb. xi. 19, ‘God was able to raise him up, even from the dead’), and by the resurrection of Christ (24).” As Paul, later in his epistle, speaks of the resurrection of believers, we can assume that he also had in mind the power of God to raise from the dead all those who have faith in Him.

In Rom. 6:4, 5 both Christ’s resurrection and ours are mentioned, because our resurrection depends on Christ’s. Paul points out that we are one with Christ – if we have died with Him, we will also be resurrected with Him. The theme is continued in v. 8 and 9. We can believe that we shall live with Christ, because He, having been raised from the dead, will not die again – death does not have any further dominion over him.

In Romans 8, the first chapter in that epistle which gives a lot of teaching on the Holy Spirit, our resurrection is shown to be dependent on the Spirit who raised up Christ also dwelling in us – “if the Spirit of him that raised up Jesus from the dead dwell in you, he that raised up Christ from the dead shall also quicken your mortal bodies by His Spirit that dwelleth in you.” (vv. 11). In v. 17 we are to be glorified together with Christ. The suffering those early Christians endured for Christ often ended in death – only resurrection could be the way to be glorified with their Lord. Later in the chapter Paul lists in order the steps toward glorification of those called by God. There is no mention between justification and glorification of the resurrection. This is an accepted part of the process. V.23 speaks of the “redemption of our body.” That is, of course, the resurrection of our body. As v. 29 says, we are designed “to be conformed to the image of his Son”. In commenting on this, Chafer says, “This conformity to Christ is evident even in the resurrection or translated body that believers will receive” and quotes Phil.3:21 and 1 John 3:26 ((Chafer, Vol. 1, p.339, 340)) .

Again, in 1 Cor. 6:14, our resurrection is mentioned in association with Christ’s. God has raised Him up, and will also raise us up by His own power. In fact, our resurrection is inseparable from Christ’s, as is again shown in 2 Cor.4:14. God raised up the Lord Jesus, and by Jesus will also raise us up. In this reference Paul specifically includes himself with the Christians of the Corinthian church.

The greatest chapter on resurrection is that of 1 Corinthians 15, which gives proofs of Christ’s resurrection, and speaks of our own coming resurrection. Edwin K. Gedney calls this chapter “the most complete treatment of the resurrection in the Bible”. ((Chafer, Vol. 1, p.339, 340))  Paul first speaks of the truth of Christ’s death, burial, and resurrection as being the essentials of the gospel (vv. 1-3). Of the resurrection he specifically points out that He was raised “the third day according to the scriptures”. He then goes on to list the sightings of the Lord after His resurrection. (More on this later in this chapter.) Verses 12-19 are very strong words, stating that if Christ is not risen from the dead, our faith is vain, and the apostles are proved to be false teachers. However, Christ has risen from the dead, and this fact is sufficient to assure us of our own resurrection. Christ is the first fruits, but through Him we will be made alive (vv. 20-23). In v.32, Paul points out that if the dead in Christ do not rise, there is no advantage to him, even if he has suffered for Christ – or even given his life for Him. The manner of the resurrection is dealt with in vv.35 – 53, proving that it is a bodily resurrection, though the bodies of believers will not be the same as at present, but a spiritual, heavenly body, incorruptible, glorious, powerful, immortal. He discusses at length the type of body we will have in resurrection (vv. 36-49), and the fact that it will all happen “in the twinkling of an eye” (v. 52). He emphasises that this change will mean our corruptible bodies will become incorruptible, and we mortals will become immortal (vv.53). The chapter finishes with a glorious cry of victory and triumph – “O death, where is thy sting? O grave, where is thy victory? … But thanks be to God, which giveth us the victory through our Lord Jesus Christ.” (vv. 55, 57). Chafer comments that man’s “spiritual state…awaits perfection until the resurrection when he will receive a new sinless body…”  ((Chafer, Vol. 1, p.339, 340)) 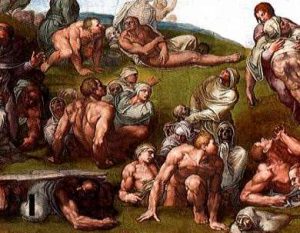 In Eph. 1:20 the focus is on the power of God demonstrated by His raising Christ from the dead. Looking back a few verses in this nine-verse sentence, we can follow Paul’s reasoning, that the same power is what gives us the hope of our calling and our glorious inheritance, to claim which we also are going to need to be resurrected. In vv. 19, 20 he speaks of the “exceeding greatness” of this power which raised Christ from the dead. Our resurrection is made so sure by Christ’s, that later on the epistle, in 2:5, 6, he uses the past tense, “hath quickened us together with Christ”, “And hath raised us up together…” In a spiritual sense, we experience this resurrection even now.

In Phil. 3:21, though not using the word “resurrection” Paul describes how the Lord Jesus Christ is going to change “our vile body” into one like “his glorious body”, which is a description of the changes which will take place when Christ returns.

Colossians 2:12, 13 focus on the spiritual aspect of our being joined together in the resurrection of Christ, as it speaks of being “quickened together with Him” and of the forgiveness of sins. It is through God who raised Him from the dead, that we are risen with Him, through faith. “…in Christ they share the resurrection experience. In Christ’s case it was a literal bodily resurrection from the dead. In their
case, the death was spiritual…and the being alive is also spiritual.” ((The New Bible Commentary. I.V.F.)) This thought is continued in Col.3:1 where Paul appeals to the Colossians to seek spiritual things on the basis that they are risen with Christ.

Beryl Ching, spent over 40 years on the mission field in India. Returning to New Zealand to “retire”, Beryl was for a long time secretary of the Conditional Immortality Association. ‘Resurrection as Revealed in the Old Testament and Confirmed in the New testament’ is the full title of her Thesis presented to the Faculty of the Freelandia Institute Biblical Theological College in partial fulfilment of the requirements for the Degree Master of Biblical Studies.