You are here: Home / Theology / Exploring Conditional Immortality / “To be gathered to his people” 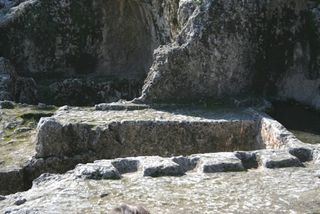 What does it mean for someone who has died to be “ gathered to his people ”? In Genesis 25:8, Moses tells us that “Abraham breathed his last and died at a good old age, an old man and full of years; and he was gathered to his people”(ESV). This is a particularly common expression in the Old Testament. It also describes the death of Isaac1 , Ishmael,2  Jacob,3  Aaron,4  and Moses5 .  It was applied to good King Josiah,6 and to the entire generation of Israelites who grumbled against Moses during the exodus:

And Joshua the son of Nun, the servant of the LORD, died at the age of 110 years. And they buried him within the boundaries of his inheritance in Timnath-heres, in the hill country of Ephraim, north of the mountain of Gaash. And all that generation also were gathered to their fathers. And there arose another generation after them who did not know the LORD or the work that he had done for Israel. (Judges 2:8-10 ESV).

Since this expression implies an equal status of all those who have died – regardless of whether or not they pleased the LORD during their lives – it has been seen by conditionalists as one more piece of evidence in favor of soul sleep. Some have argued that this expression is inconsistent with the notion of an unconscious intermediate state. John Calvin argued that “Scripture, in speaking thus, shows that another state of life remains after death.”7 He is suggesting that there is theological content in that ancient expression. He is saying that it provides humanity with more than a statement about death, but gives us a theological answer to those who want to know about the hereafter. Likewise, Swedenborg says that the expression meant that the departed “had actually come to his parents and relations in the other life.”8
Ancient Near Eastern tradition does contain some talk of life after death, but there is not sufficient evidence to conclude that these expressions about being gathered to one’s people are affirming that tradition. Those who see these expressions as providing assurance of life after death appear to be reading that idea into these texts. Some opponents of an unconscious intermediate state approach these
expressions more exegetically. Hamilton points out that in Gen. 25:8, the phrase “was gathered to his people” is separate from both the description of Abraham’s death and his burial. He argues on that basis that “being gathered to one’s kin preceeds burial. Therefore, to be gathered to one’s kin cannot mean to be entombed in the grave.”9 .He points out that neither Abraham, Ishmael, Moses nor Aaron were buried in their respective ancestral graves. He agrees with Clinton in his conclusion that the expression “does not mean simply to die or to be buried in the family tomb, but it meant joining them in the other world.”10
We are in debt to these exegetes for pointing out that this expression does mean more than the fact that a person has died and was buried. But, in so doing, they reveal the mistaken assumption that those of us who disagree with their theology (of a conscious intermediate state) read nothing more into the expression than seeing it as synonomous with “he was buried.” By setting up that straw man it is very easy for them to defeat it, and then triumphantly declare their theological conclusion the winner of the fight.
The fact is, most of us who hold to an uncounscious intermediate state do not do so because we deny the possiblity of an intermediate state. We simply do not see the logic in jumping from statements like “he was gathered to his people” to theological statements that deny human mortality, and subvert the hope of the resurrection. There is an intermediate state, but the case has not been made that it is a conscious one. The dead are united in death, but that does not imply any awareness of their surroundings.

A more appropriate way of dealing with this expression theologically is to compare it to other expressions found in scripture which touch on the same topic. Conditionalists see the expression “gathered to his people/fathers” as ambiguous, so when we are looking for more content about the intermediate state, we compare such statements with “lie down (or rest or sleep) with (one’s) fathers.” That expression is used by Jacob to refer to his expected death11 . The LORD uses it to refer to Moses’ expected death12 .  The LORD also uses it to describe David’s death when he tells him “When your days are fulfilled and you lie down with your fathers, I will raise up your offspring after you, who shall come from your body, and I will establish his kingdom.”13 The expression is used repeatedly (35 times) in the books of 1 and 2 Kings and 1 and 2 Chronicles. Sometimes the expression does refer to the place of burial, but not always. Its essential meaning must be “that the deceased is united in death with his fathers or relatives who died before them.”14
This also appears to be the origin of the word “sleep” as a metaphor for death, which appears in the New Testament as well. Before raising a little girl from death, Jesus said that she was sleeping15 .  Jesus told his disciples that “Our friend Lazarus has fallen asleep, but I go to awaken him.”16 At the time of Jesus’ crucifixion, some of the saints “who had fallen asleep” were raised17 .  Peter tells of scoffers who argue “Where is the promise of his coming? For ever since the fathers fell asleep, all things are continuing as they were from the beginning of creation.”18
There are two major metaphors, then, which originate in the Old Testament and speak to the issue of the intermediate state. One speaks of the dead person being gathered to his or her relatives. The other speaks of that person lying down or sleeping or resting with those same relatives. When these two expressions are combined, they help establish a basis for some theological principles about what happens at death.
1) All who die go to the same place. Death is not a place of judgment. It is a state where one is reduced to the same status as one’s ancestors. This does not preclude a day of judgment later, but neither does it establish that judgment is taking place during the intermediate state.
2) Since death is described as sleep, the natural assumption is that the intermediate state is unconscious. The scriptures verify this assumption by describing the intermediate state as one of darkness19 , and silence.20
3) The hope of the believer is found in neither of these realities, but looks beyond them. To be true to the scriptures, the believer does not look forward to death or the intermediate state. The believer anticipates the resurrection, just as someone who lies down and sleeps looks forward to the morning light.