You are here: Home / Other / Devotional / Christmas Myths 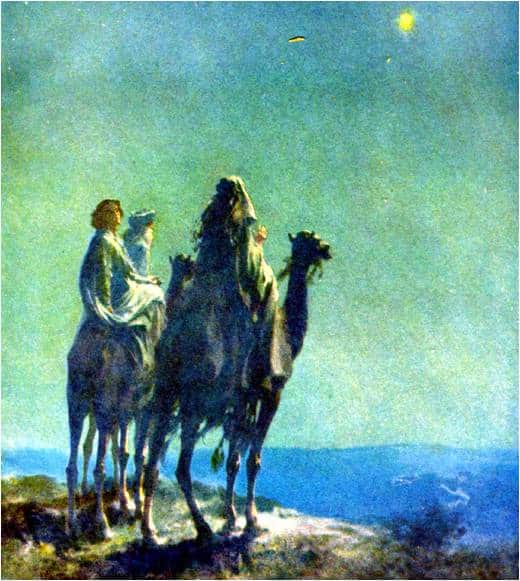 The world has adopted Christmas as a time of celebration. If Christians are not careful, we might find ourselves swallowing some Christmas myths — affirming some non-Christian ideas about Christmas.
Some of these myths are just the result of being careless about the facts of Christ’s birth – like the myth that the wise men followed the star to the stable at Bethlehem. Actually, by the time the wise men arrived, Mary and Joseph had moved into a house.1  Other myths are just traditions that people have added to Christmas – like the notion of a jolly man in a red suit and his reindeer.
Then there are the hidden myths about the meaning of Christmas. The Christian should be careful not to casually affirm these statements, because they actually teach the opposite of what Christ taught about his first coming.
Myth #1 Because of Christmas, we are all forgiven.
The world does not mind acknowledging the birth of Christ once a year. In fact, the world wants desperately to believe that now that Jesus has come, his Father no longer holds them accountable for their sins. It wants to believe that God has abolished his law. But Jesus said he came not to abolish the law, but to fulfil it.2 He said he came as light, but anyone who rejects that light (his words) will be condemned on the last day.3
Myth #2 Because of Christmas, we can have peace and unity.
Our secular Christmas cards also proclaim that Christmas means peace on earth, but the Bible says that Christmas brings peace to those with whom God is pleased.4 . Jesus taught that his coming did not bring peace, but division.5 Real faith in Christ separates us from non-believers.
Myth #3 Because of Christmas, we can ignore death.
People act as if Christ’s birth is all that really matters. The world wants to celebrate life, and not think about death. During this time of year, Christ is a child in a manger, not the man dying on a cross, and not the man who came forth from the tomb. But Christ said that he came down from heaven (at Christmas) so that those who believe he died for them will be saved, and that he will raise them on the last day!6 He didn’t ignore death. He defeated it.
Have a happy holiday, and remember that the first Christmas gift was the best ever.