You are here: Home / Theology / Evangelical annihilationism / the wrath to come 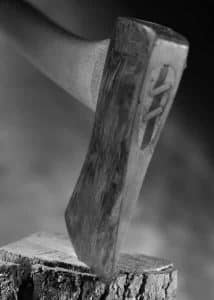 The biblical prophets had a double role.  As representatives of the LORD, they were free to pronounce blessing upon the people if God willed it.  Often, however, they predicted his impending judgment.  John the Baptist was no exception.  As the forerunner to the Messiah, he proclaimed the marvelous good news (or gospel) that Christ was coming to this earth.  Yet the people were not ready for their king. Consequently, John’s message was one of repentance for the forgiveness of sins.  The good news of the Christ to come had to be taught alongside the bad news of the wrath to come.  Two very similar verses from the record of John’s ministry in the New Testament highlight this message.

These are the first major texts in the New Testament that address the issue of final punishment of the wicked.  They reflect the fact that John encountered multitudes of Israelites who felt ready to embrace the coming of their Messiah, but they were actually not ready.  So, John’s message was to get ready for him or face his wrath.

The crowds, and particularly the religious elite, felt that the Messiah’s coming would bring victory against Israel’s enemies, and blessing to all of those who were physical descendants of Abraham and Jacob.  John’s message was that physical lineage meant nothing.  If God wanted to, he could produce children to Abraham out of stones. In fact, being children of Israel meant that these people stood to be the first to fall when God’s wrath is unleashed. Thus, John’s message was that the nation had to get right with its God.

the wrath of the orchard owner

The nature of this wrath is spelled out by John with two familiar images.  First, he pictures the Messiah as an orchard owner, whose axe is laid at the root of the trees.3  He had planted the trees for the purpose of bearing fruit.  If they are fruitless when he comes, they will serve as firewood.  Their destruction would be fair because they will have not served their master’s purpose.

The threat that these people face could in no way be construed as any kind of eternal existence at all.  They were in danger of being cut down and destroyed.  The wrath that John described was not an ongoing process of perpetual wrath, but an event.  That event would be eternal, in the sense of permanent.  It would result in death forever – the second death.

the wrath of the wheat farmer

The second image John uses to describe the wrath to come is that of a wheat farmer during harvest time.  The Messiah would gather the authentic wheat into the barn for preservation.  He will then set out to remove all the chaff that is left over.  He will do this by burning the chaff up.4

The image illustrates essentially the same teaching as the axe image did.  Those who are not prepared for the Messiah’s arrival will not take part in his kingdom.  They will be excluded from it because they will have been destroyed by the Messiah’s wrath.  Mere appearance will not save them.  Unfruitful chaff will be eliminated in the same way that the unfruitful trees will. The wrath is fire, and the fire destroys.

But John’s use of the wheat farmer imagery adds one more element to the theology he is defining.  This element makes explicit what was merely implied in the use of the orchard owner image.  John further describes the fire of God’s wrath as “unquenchable.”5

Piper insists that “the term “unquenchable fire” implies a fire that will not be extinguished and therefore a punishment that will not end.”6  Neither the image, nor the teaching of John the Baptist support that assumption.  The adjective asbestos only appears three times in the New Testament.7  In each reference, the word describes the nature of the fire, not the process of burning.  It is a warning that anyone thrown into the fire will not be able to extinguish it. It contains no promise that the process of burning will go on forever.

In both of the images John the Baptist uses, it is clear that the subjects thrown into the fire are destructible – that is the point.  The trees and chaff are not thrown into fire to be tortured, but to be destroyed.  The punishment is destruction.  The masters of the orchard and wheat fields gain neither pleasure nor profit from this fire. It is only there to eliminate what will not meet their objectives.  Likewise, God will not be pleased when he puts people into the fire of Gehenna hell.  His wrath only exists because eternity is for the recipients of his grace alone.  His wrath is subservient to — not coequal to – his love.

The conditionalist teaching on hell is that it will be a necessary reality at the end of the age.  It does not take place at death.  It takes place in conjunction with the second coming of Christ.  This is in line with John the Baptist’s teaching on the wrath to come.  John never mentioned the intermediate state.  To him, what happens at death is eschatologically insignificant.  Judgment will happen when the Judge returns.

Traditionalists have bought into the unbiblical concept of immortal souls, and must do something with those souls in the intermediate state.  Thus, they highjack passages like these, and make them serve another purpose.  For them, the wrath of God is not something that Christ brings with him, it is something that the wicked go to.  In so doing, major elements of the text have to be explained away, because they do not fit the new referent.

Rob Bell questioned how God could be a winner in such circumstances.8  He was right to do so.  The traditionalist doctrine of hell makes God’s wrath the end.  John taught that the Messiah’s wrath would be necessary, but the purpose was different.  Wrath is necessary to make room for eternal peace and love.  In the traditionalist approach, God’s wrath never makes an end of sin. It is eternally affected by it.

the purpose of the wrath to come

These snapshots from John the Baptist’s ministry teach of a wrath which will accomplish the greater purpose of establishing a world without evil and sin, where love and righteousness will reign eternally.  They envision a harvest that will outlast the judgment.  They see fruit trees productive forever, and wheat gathered safely into the barn forever.  The burning fires that remove the impediments in this vision are inevitable, and they cannot be put out until they accomplish this vision of forever.  But the fires are not the purpose.  They will be unquenchable until they accomplish the purpose.

If this is not so, then the coming wrath serves absolutely no purpose.  Today we live in a world where good and evil already coexist.  There are productive trees, and hypocritical trees.  There is wheat, and there is chaff.  Both exist together, so God’s glory is limited by the unholy combination.  The traditionalist teaching is that God’s wrath will merely separate the unrighteous, but that they will continue to live eternally in the same universe as the righteous. God’s universe will be eternally marred by the existence of this blight, and his wrath will not be able to change that.  The God who once saw all creation and pronounced it “very good” will never be able to say that again.

Conditionalists suggest a different scenario.  we suggest that John’s description of hell is much more realistic.  Hell is a tool God uses for eliminating the undesirable elements, and that is all.  The fire is real, and it does what fires do. It destroys, and makes way for something better, something indestructible.  God’s love will win, not because he eventually pulls people out of hell, but because after hell has served its purpose, there will be no need for wrath. The Christ whose wrath will destroy the old things will make “all things new.”9