You are here: Home / Theology / Exploring Conditional Immortality / The meaning of appollumi (ἀπόλλυμι) 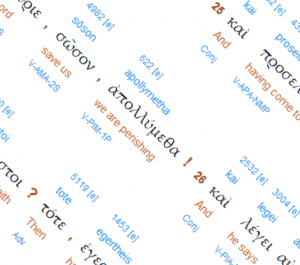 Bill Mounce, NT Greek Scholar, noted on his blog an increase interest in the words and grammar related to the afterlife.

“I have been receiving requests lately about words and grammar that all relate to the issue of annihilationism and potentially universalism. I don’t know if these connections are explicit in the mind of the writers, but that is the common thread. Interesting. Recently someone asked about the precise meaning of the Greek verb apollumi. Perhaps this is a good time to talk about how words have meanings.” from Does apollumi mean “destroy”

Sorry to not be able to give you a cut and dry answer. There is nothing in the word that necessitates apollumi means a permanent and total destruction. I think this was the question I was asked. It certainly can carry that meaning, but it is context (including one’s theological understanding of the ideas conveyed by the word) that make the final decision.{emphasis mine}

Glenn Peoples posting on Rethinking Hell address this issue: The meaning of “apollumi” in the Synoptic Gospels.

In each and every other instance where all these criteria are met, the meaning is the same. There literally is no semantic range in these cases. Some claims in biblical interpretation are matters of opinion and open to question, but this is not one of them. This is a feature of the raw data itself – what we think it implies however may be questioned. But at minimum, it is clear that to take a meaning that arises from a significantly different usage of apollumi – a different voice, or a different body of literature, or a different context (e.g. where we are no longer looking at the actions of one person or agent against another), and to insist that we should attribute that meaning to a use of the word that conforms to the pattern described here, at very least requires a very robust defence. The mere fact that the wider apoleia word group is capable of expressing such meanings under different conditions (e.g. ruin, lose etc) cannot be the reason that we should find that meaning in Matthew 10:28, for this would be a perfect example of the illegitimate totality transfer. However theologically inconvenient it may be for defenders of the traditional doctrine of the eternal torments of hell, this is an instance where the exegetical evidence is very heavily against them, and there is no apparent escape route via an appeal to semantics.

I recommend you read the full article over at Rethinking Hell.