You are here: Home / Theology / Evangelical annihilationism / A Question For The Bible Answer man: Will You Change Your Mind? 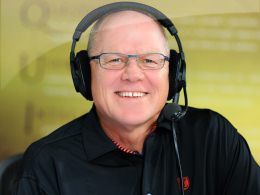 The teaching that hell is a place where the unrepentant suffer unending conscious torment is often taught by prominent Bible teachers. Just last month, Hank Hanegraaff, the host of the popular Bible Answer man radio show, had a conversation with Lee Strobel, author of the many books including the excellent bestseller, The Case for Christ. That conversation highlighted some of the non-Biblical arguments these scholars use to uphold tradition over truth.

Before I critique their discussion, I must say that I have a great deal of respect for the work of these men. I just recommended Strobel’s book in my previous article. When I became a Christian in my late teens, I often listened to the Bible Answerman radio show with Walter Martin, who was assisted by Hank Hanegraaff at the time. These men are leading teachers, advocates for the authority of the Bible and defenders of the faith. How can I be bold enough to question them, when they have hundreds of years of tradition behind them in addition to their many years of education, experience, and popular books?

I question them humbly, and with great concern. If what people believed on the subject of hell didn’t matter, I wouldn’t waste my time. However, it does matter. The false teaching that God is going to punish people for an endless eternity is keeping people from knowing Him. Just last week, a co-worker requested prayer for a friend who had turned away from the faith towards universalism, because he decided the Bible isn’t reliable if it teaches a hell of endless conscious torment. Many others turn to atheism because of the traditional view.

In the January 31, 2013 Bible Answer man broadcast (about the 27:25 mark), Strobel referenced a letter from a believer who asked about annihilationism–the teaching that the unrepentant wicked cease to exist after judgment. He led into Hanegraaff’s remarks by saying, “… It’s just not biblical, Hank! And I’m seeing some evangelicals buy into it, are you?”

(Bible Answers man website is down at the time I published this article, hopefully it will be back soon. But found a link to the broadcast Doug mentions here:
https://www.oneplace.com/ministries/bible-answer-man/listen/lee-strobel-interview-on-afterlife-324179.html  ~ed)

Yeah, I think it’s absolutely true … There is such a thing of degrees of punishment in hell, and annihilationism doesn’t come in degrees.

Actually, annihilation does come in degrees. This statement reflects a lack of study of the annihilationist position, especially into the diversity of views among those who teach conditional immortality. Many conditionalists, including myself, reference verses like Luke 12:45-47, an end-times focused parable where Jesus clearly describes degrees of punishment. Romans 2:6 highlights a recurring Biblical theme that God’s righteous judgment is “according to their deeds.” This punishment then ends in literal death, or the complete end of existence, as affirmed by verses like Romans 6:23: “the wages of sin is death.”

And there is something further that we should recognize: a God of love and justice does not arbitrarily annihilate the crowning jewels of his creation.

This completely un-Biblical statement is somewhat chilling in its cold reference to God in the third person. “A God” makes the argument sound merely academic or philosophical. Hanegraaff’s definition of what “a God of love and justice” does is different from how the one true God Himself describes justice in the Bible. From His judgment of the first sin in the garden: “to dust you shall return,” (Genesis 3:19) God defines ultimate justice in terms of actual, real, and complete death. Hanegraaff’s use of the adjective “arbitrarily” is meant to paint the annihilationist position as capricious or unjust. There is, however, no arbitrariness in the Bible’s description of the annihilation of unbelievers. Revelation 20:11-15 shows God on a white throne where books are opened, and individuals are held accountable for their lives. Those who are not redeemed are condemned to the second death, when God will destroy both “body and soul in hell” (Matthew 10:28).

He will however continue to sustain us in existence, albeit, apart from His goodness and His grace, and that of course, is the horror of hell.

There are a growing number of Christians reading the Bible for what it says, outside the influence of tradition, who find that the Bible is clear when it says: “the wages of sin is death.” John 3:16’s promise of eternal life for those who believe is contrasted with unbelievers who literally “perish.”

This means that advocates of endless conscious torment like Hanegraaff must provide specific Biblical references for their claims. This previous statement is a perfect example: where does the Bible teach that God sustains anyone in eternal existence apart from His goodness and grace? How is that even possible? A teaching this important must have a direct reference, not an inference from a metaphor or pure speculation.

Flames in Hell are far from literal. The martyrs, of course, they experienced fire. They were dressed in tar jackets and they were lit ablaze in the first century. But what they didn’t experience is the horror of being perpetually unloved by the one in whose image they were created.

I certainly agree that the flames referenced to describe hell in the Bible are not necessarily literal. However, whatever “flames” describe, they do not describe something completely different from what we know flames to be on earth. We all know what fire does: it burns things up. Wood, hay, or stubble that is thrown into a fire is completely destroyed. It becomes ashes. It does not become eternal, or go somewhere separated for an endless, unloved eternity. If the God who inerrantly inspired the Bible intended for us to understand the concept of a perpetual state of being unloved, don’t you think He could have avoided metaphors like flames that convey destruction? Might He also have avoided the use of terms translated “perish,” “destroy,” or “destruction” to refer to the end of the unredeemed?

Hanegraaff ended his remarks with:

Imagine perpetual existence in the absence of love–in the absence of a sense of relationship because that’s what the torment of hell really is. And we were created for relationship with God. So what happens is not annihilationism but the erasure of the imago dei or the image of God in humanity so that we become as it were brute beasts. We were designed for love and relationship and now that has been erased. But we continue in existence. That, I think, paints a picture of the horror of hell.

Regardless of the Latin reference, no Scripture says that the punishment of hell includes the loss of the image of God or that the unredeemed become something like brute beasts. This is completely speculative, built on the Greek philosophy of the immortal soul and not the Biblical teaching that we are dust, and to dust we shall return.

The Bible teaches that the gift of God is eternal life (Romans 6:23). Nobody possesses eternal life without God. Death is the end of life, destruction, or annihilation. It’s time for Bible teachers to leave behind Greek-inspired, non-Biblical arguments and read the Bible for what it actually says.

Further, does being a prominent Bible teacher mean that you are inerrant yourself? Since God is unchanging, do Bible teachers need to be unchanging too? Or should we all, in humility, constantly be searching for God to correct and train us? Is there no room for reformers, for those who look at hundreds of years of tradition, like Martin Luther did, and challenge people to read the Bible for what it says instead of how it has been misinterpreted for centuries?

It’s time for evangelical leaders to challenge their arguments, see where they came from, and if they don’t line up with the Bible, to change their minds. A time of reformation is as hand! I pray that teachers like Hanegraaff and Strobel will join it.

Doug Smith is a grateful follower of Christ and an avid Bible student who is willing to believe the Bible, even when it contradicts tradition. He was mentored by Dr. Timothy Barnett in the study of the Scriptures, including conditional immortality. Doug writes on these and related subjects at www.endlesshellended.com. He is blessed by his wife Lynetta, who is also a professional editor. Doug and Lynetta share four daughters and live near Nashville, TN.

"My brother, sister, friend — read, study, think, and read again. You were made to think. It will do you good to think; to develop your powers by study. God designed that religion should require thought, intense thought, and should thoroughly develop our powers of thought. The Bible itself is written in a style so condensed as to require much intense study. I do not pretend to so explain theology as to dispense with the labor of thinking. I have no ability and no wish to do so." -- Charles G. Finney