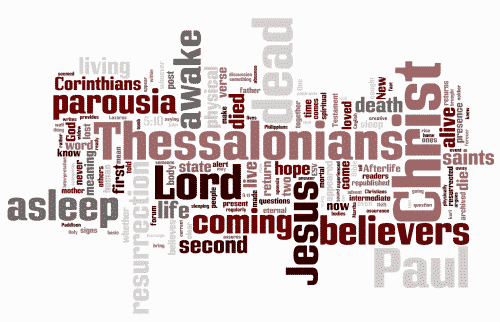 The Holy Spirit has given us a masterpiece of precision in the Bible. Its words are crafted with such care that readers usually stumble upon the correct meaning of texts without much preparation and study. On the other hand, the human brain is a complex organ, and capable of creative interpretation. Sometimes we get rather creative in how we read the Bible. 1 Thessalonians 5:10 provides evidence of this proposition.

Paul tells the Thessalonian Christians that Christ “died for us so that whether we are awake or asleep we might live with him.”1  Exegetes need to ask (at least) two questions of the text here: “What does ‘awake’ and ‘asleep’ mean in this context?” and “Is this verse an affirmation of dead believers consciously living with Christ before the resurrection?”

The passage within which this verse is found is 4:13-5:11. The primary subject matter is the second coming of the Lord. Paul writes “we do not want you to be uninformed, brothers, about those who are asleep, that you may not grieve as others do who have no hope.”2  In that verse, those considered awake are alive, and “those who are asleep” have died. The question had begun to present itself to believers as to what is happening to their loved ones who died after Jesus’ ascension. Paul does not tell them that it is none of their business. He has an answer to their questions. He does not want his readers assuming (as the godless do) that the dead are gone forever. He wants them to have hope, and a specific hope – not just the anticipation of some kind of life beyond the grave.

The basis for the believer’s hope in life after death is the fact “that Jesus died and rose again.”3  It is not based on something about human nature, or the existence of something essentially immortal within all human beings. If Jesus had not physically rose from the dead and walked out of his tomb, the hope would not be there. Jesus had been asleep in the tomb, and brought out of that sleep by a resurrection. Paul promises that Jesus will be the means by whom God will bring all the dead in Christ out of their sleep. Jesus said the same thing to Martha. He said that he is “the resurrection and the life.” He spoke of that coming resurrection day when he said that whoever believes in him, will live then, even if he is dead now.4 He went on to promise that whoever is living at the time of that resurrection, and believes, will never die. So, for both Jesus and Paul, there are only two classes of believer, the living (or awake) and the dead (or asleep). Both await Christ’s second coming.

Paul assures his readers that Christ is not going to return and set up his kingdom on earth without first raising those asleep in him. He says that “that we who are alive, who are left until the coming of the Lord, will not precede those who have fallen asleep.”5 Perhaps someone had taught the Thessalonians that the dead would stay buried until after the millennial reign, or some other event. Paul says, no, when Jesus returns, raising the dead is the first thing on his list.

The second coming will be an unmistakable cataclysmic event. It will be preceded by three unmistakably loud sounds: a command shouted from the Lord himself, the voice of the archangel, and the trumpet call. Then, all the dead will burst from their tombs.6 When God acts to raise the dead, everyone will know it. It has not happened yet, but we will know it when it does.

So, what did Paul mean when he told the Corinthians that he “would prefer to be away from the body and at home with the Lord”?9  He meant, simply, that he would rather be away from his present mortal body (his earthly tent) and, at the same time at home with the Lord (pros ton kurion). That is not going to happen until the resurrection, when this temporary mortal “tent” is replaced by his eternal “building from God”.10  Since this resurrection does not occur until the return of Christ, Paul’s theology is consistent. The hope he speaks of to Corinth and to Thessalonica is the same: a reunion with Christ at his return.11

The New Testament describes the coming of the Lord as a “parousia,” his physical presence, as opposed to his physical absence. It is the combination of ousia, meaning substance or being, and para, meaning close proximity. It’s opposite is apousia, meaning absence.12  This meaning is implied throughout the uses of parousia in the New Testament. It always applies to Christ’s physical reappearance at his second advent. This is made clear by the New Testament uses of the word when it do not refer to the second coming, but to someone else’s physical presence.13  For Paul, the hope of the saints is not some spiritual presence at death, but the actual physical presence of Christ at his second advent. At this parousia, those who belong to Christ will be raised to life again.14  At this parousia, Paul will rejoice over those he has won to Christ.15  That is because the parousia will be the time when our Lord will appear “with all his saints.”16  In this verse, 1 Thessalonians 3:13, the English word “coming” – the most popular word used to translate parousia – leads us astray. Popular teaching – based on this mistranslation – has Jesus coming from heaven with the disembodied souls of his saints. Then he reunites these souls with their resurrected bodies. Paul is not saying that Jesus will come with the saints. He is saying that Jesus will appear with the saints. One little word shows that this is the correct interpretation: the word all. All the saints includes those who are alive (awake) as well as those who are dead (asleep). At the parousia, these two groups will be reunited with the Lord.
alive or alert?

Midway in Paul’s description of the second coming, he starts using the words asleep and awake in a different sense. He teaches that Christ will come suddenly, like a thief. On the basis of that sudden coming, he instructs the Thessalonians “let us not sleep, as others do, but let us keep awake and be sober.”17  His contrast has changed. Instead of contrasting the two categories of believers (living saints and dead saints), he now contrasts unbelievers (those who will be caught sleeping at the parousia) and believers (who live in the light, and so will be ready when Christ comes.

This change in the use of the awake/asleep metaphors has some interpreters concluding that Paul is not referring to the death state at all. The New English Translation renders 1 Thessalonians 5:10 as “He died for us so that whether we are alert or asleep we will come to life together with him.” This translation takes Paul as rendering assurance to believers who are not ready for Christ’s return! One commentator writes “This destiny not only belongs to those Christians who are wide awake when Christ comes, but also to those who are sound asleep.”18  But Paddison argues that even though the verb translated “to be awake” in 2 Thessalonians 5:10 can mean to be alert, the theological logic of Paul in the entire section argues that Paul is using it in reference to the alive in Christ.19

Christ will come for all believers, regardless of their spiritual condition at the moment of his coming. Yet, it is not clear that Paul is giving that assurance in this text. He is, in fact, warning the Thessalonians not to be caught sleeping. It would make no sense for him to turn around and say, in effect, that regardless of their obedience to this command, Christ will accept them anyway.

What does this verse tell us about the intermediate state – the state of the dead between death and the resurrection at Christ’s parousia? It does not say that believers who are asleep in Christ are presently living with him. It affirms that Christ died “for us” – and that his death is applied equally to all believers, whether living or dead. But only (as the context makes clear) at the parousia will the subjunctive clause become indicative. Only then will both categories of believers live with him. The NLT puts it well: “Christ died for us so that, whether we are dead or alive when he returns, we can live with him forever.”

What this passage does affirm about the intermediate state is that there is a contrast between believers who are living and those who are dead. While both will live with Christ when he returns, only those who awake are living now. The dead in Christ are asleep. While their eternal inheritance is assured, their present walk has been cut short by death. They are unconscious, awaiting the parousia, when we will all be “gathered together to him.”20 Those of us who have lost loved ones can take courage, because Christ’s death on the cross assures us that their rest is temporary, not eternal.