You are here: Home / Bible / New Testament / better than survival | The Hope of Resurrection

Recently, my wife and I joined a North American mission leader’s conference, together with some 1200 of our colleagues. On the closing session of the conference, they featured a young African-American poet, Micah Bournes. I hope that what he shared is going to be on his new album, because I would love to hear it again. It resonated with me, perhaps more than some of the other things said at the conference, because it spoke of the centrality of the resurrection. Micah said that our hope was not merely to float up into the sky when we die, but to be fully and completely and miraculously resurrected.

I don’t know whether Micah is a conditionalist, but it was refreshing to hear such words. They reminded me that we who believe in life only in Christ have a message that speaks to modern day Christianity. We feel the call to remind the world that its hope in Christ is not merely survival of a disembodied soul, but a restoration of life in its fullest as we were intended to live. 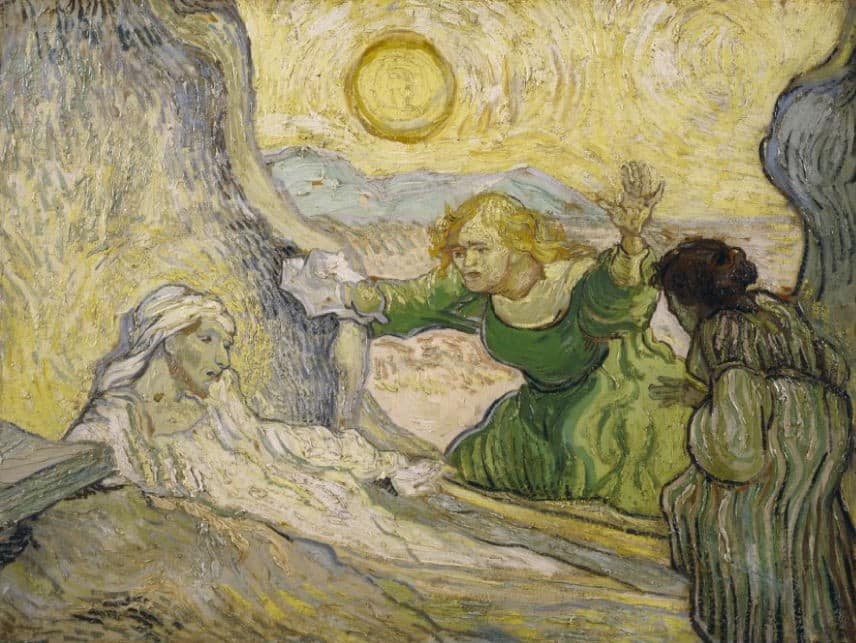 a conversation in Bethany

Jesus came to Bethany four days “too late.” His friend Lazarus had died, and Jesus did not even make it for the funeral. Lots of their friends from Judea had called on the two sisters, Mary and Martha, to “console them concerning their brother”1 but Jesus had been a no-show.

The Bible records that once Martha learned that Jesus was coming, she went to meet him, while Mary remained seated in the house.2  The last we had heard of these two women, Jesus had instructed Martha that Mary had made the better choice by remaining seated at his feet and listening to his teaching.3 Now, perhaps Martha has made the better choice. She is running to Jesus in her hour of grief.

The first words to come out of Martha’s mouth were “Lord, if you had been here, my brother would not have died.”4  That was probably true. There must have been a reason that Jesus had deliberately delayed going to Bethany once he was told of Lazarus’ illness. He knew that it was God’s plan that his friend succumb to that illness. It would have been torture for him to watch that happen, particularly since he has the power to stop it.

I cannot resist saying that I have often felt like Martha felt. I have wept at the passing of many relatives and friends, and have often been overcome by the irony that at the core of my hope is a Saviour who can raise the dead. Resurrection, for me, is more than an appendix added on to my foundational beliefs. Like Paul, everything that I might endure in this life is “that I may know him and the power of his resurrection, and may share his sufferings, becoming like him in his death, that by any means possible I may attain the resurrection from the dead.”5  To me, a relationship with Jesus, and the resurrection hope that emerges from that relationship are one and the same.

The early Christians annoyed the Jerusalem rulers because they shared and preached the same hope. They spent their time “proclaiming in Jesus the resurrection from the dead.”6 In fact, sometimes their pagan listeners misunderstood them and thought they were preaching about two deities: Jesus and Resurrection.7

It is amazing how easy it is for people – even Christians – to go through their entire grieving process today, scarcely thinking about the resurrection. What a shame that this is not the hope the church has championed. The resurrection – not the ascension — makes sense of Jesus’ death. The hope of resurrection at the second coming makes sense of our own deaths.

Martha, reeling from the reality of her loss, saw in Jesus the epitome of that hope. She confidently affirmed of Jesus that “even now I know that whatever you ask from God, God will give you.”8 She was inviting Jesus to raise her brother from the dead. She had every confidence that Jesus could not only have prevented her brother’s death, but that even now – four days too late – he could raise him to life.

Lots of people seem to be able to produce within themselves a decent “in this life” hope. They surround themselves with positive words and music, keep making positive confessions, and avoid negative vibes like the plague. But, once the last breath in their loved one is expired, that is it. The apostle Paul says that Christians are not to be like that. He argued that if “in this life only we have hoped in Christ, we are of all people most to be pitied.”9  If our hope ends at graveside, it is a lie.

Martha’s hope was not dampened by the fact that her brother’s corpse had already begun to rot. She believed that nothing was impossible with God. She believed that Jesus’ power was not limited by her brother’s death. She did not lie to herself. She knew her brother was dead. He was not floating in the clouds, or off somewhere nice, playing a harp. He was stone-cold, graveyard dead. But Jesus could – and can – change that.

Jesus returned Martha’s serve (to use tennis language) by simply saying “Your brother will rise again.” Forgive me for taking that promise out of its context, but I first choose to apply it to myself. I have two brothers, and both of them have fallen asleep in Jesus. When I read those words, my thoughts go to them. I can hear my Saviour assuring me that their deaths, although tragic, are not permanent. I want to share these words to console others, like myself, who are facing the ugly reality of the separation death brings. God’s word to us is that our brothers, sisters, spouses, parents, and friends and co-workers who have died are not forgotten. They have fallen, but they will rise again.

The volley continues as Martha assures Jesus that she agrees with that hope. She told Jesus “Yes,” …, he will rise when everyone else rises, at the last day.”10 That statement is both true and false. Lazarus lived in the first century A.D., and is most certainly dead today. He is among those who will hear the voice of Jesus and come out of their tombs at the last trump on the last day.11 That makes Martha’s statement true.

But what Martha did not know was that Jesus was prepared to respond to her invitation to raise her brother that day. She had professed a confidence that Jesus could ask the father to raise Lazarus from death, and that the Father would comply with that request. What Jesus was actually telling Martha was not that Lazarus would “some day” rise, but that he would “this day” rise. So, what Martha meant by her reply was incorrect. She would not have to wait for resurrection day to see her brother’s resurrection.

“Jesus said to her, “I am the resurrection and the life. Whoever believes in me, though he die, yet shall he live”12

Our hope is in Jesus and who Jesus is. There will be a resurrection on the last day, and Jesus was inviting Martha to go forward in time and (in something like a vision) witness that glorious event. The wording he uses paints a picture of resurrection day. Christ, the resurrection and the life, stands with one person in front of him, a representative person whom Jesus calls “the one who has died, believing in me.” Martha (I am sure) pictures this as Lazarus. Jesus tells the fate of Lazarus (and, by extension, all others who die before his return) in one word in Greek: Zésetai — “he will live.”

“and the one who lives and believes in me will never die.”

Suddenly, the picture changes. There is another person in the picture. That person is “the one living and believing in me.” I’m sure Martha saw herself. She was “the one still living” and Lazarus was “the one who has died.” The promise of our Lord was that there would be a reunion, and that he (Jesus) would be at the centre of it. This is what Martha wanted. She did not want to hear that Lazarus was in a better place. He was not. She was not interested in any conjecture about his secret survival in the intermediate state (between death and resurrection). Her hope was life in its fullest, shared with her brother whom she missed.

Jesus was sharing a glimpse into that great day when the dead in Christ (like Lazarus) will come to life again. Those who are still living (like Martha) and waiting for them to rise will also be changed. In fact, Jesus promises that they will “never die.” Any believer who is fortunate enough to still be alive when Jesus returns will be a literal referent of this promise. These fortunate ones will be changed from mortal to immortal in an instant. They will never die!

The apostle Paul first thought that Christ was going to return in his lifetime, so he put himself in the second category.13 Later, when he realized that he would probably die before Christ’s return, he began to speak differently:

“I have fought the good fight, I have finished the race, I have kept the faith. Henceforth there is laid up for me the crown of righteousness, which the Lord, the righteous judge, will award to me on that Day, and not only to me but also to all who have loved his appearing.”14

Paul anticipated dying before Christ’s return, but anticipated his crown of righteousness not at his death, but at Christ’s appearing. He was not looking forward to “going on to his reward.” Instead, he longed for Christ to return with it.

Please note that for both people in the John 11 “vision” the hope Jesus described is his own return. Martha’s theological understanding of the “resurrection on the last day” was spot on. Jesus’ question to her was “do you believe this?” We should ask ourselves the same question today.

Note also how Martha’s reply makes it certain what Jesus was talking about. She said “Yes, Lord; I believe that you are the Christ, the Son of God, who is coming into the world.”15 She understood that Jesus was not talking about some nebulous survival of Lazarus’ inner soul. He was talking about his second coming, which would enable Lazarus to live again – body, soul and all.

We all know the rest of the story. Jesus demonstrated the veracity of his promise to raise all believers by raising Lazarus that day. He overcame the power of the grave and enabled Lazarus to live again.

Of course, Lazarus grew old and died again. He once again became part of that vast throng of believers who await a resurrection, at Christ’s second coming. Only, when Lazarus is raised again, it will be for keeps. Jesus is not the only one who has ever been raised from the dead, but he is the only one whom death no longer has dominion over.16 The others, like Lazarus, were raised to die again. Christ was raised “never to die again.” That is our hope as well. It is a future better than mere survival. It is a future of victory.