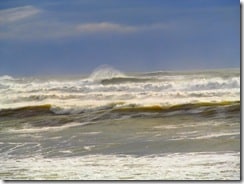 The ancient Greeks had ten ways of describing a process that goes on perpetually without end:

With this enormous vocabulary at their disposal, one must wonder why the New Testament authors never used any of it to describe the final state of the lost. Instead, they chose an the adjective aiōnios to describe – not the process, but the event of Gehenna hell. When describing an event, the adjective aiōnios refers to its permanence. The biblical authors use this word to highlight that hell’s consequences (judgment and death) are permanent.

God is infinite, so the adjective “permanent” always applies to him.2  Believers are not infinite, but we are promised permanent life in place of our present temporary ones.3 But neither of these uses of the adjective aiōnios suggest the notion that the mortal souls of unbelievers must stay alive forever and ever in order for them to receive an unending process of being punished. The proponents of a never-ending hell have placed too much emphasis on an adjective, pretending that it is an adverb. The Bible never asserts that the lost will suffer eternally. It asserts that they will suffer proportionally – that is, according to what they have done.4 Then they will all suffer the same final fate, the second death.5 God is just, and he will punish sinners. But God is not condemned to keep doing so for eternity.