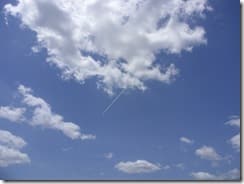 Some believers in Christ suggest that dying and going to heaven is not the destiny of the saved. Instead, we encourage believers to rethink heaven. We think that the destiny of believers is to remain on earth until heaven – that is, the Lord himself – comes here. We see evidence in scripture that the saved are in their graves when they die, and will only be rescued from those graves when Christ returns to resurrect them.

But an obscure verse in the Book of Revelation appears to contradict that evidence.

“And he opened his mouth in blasphemy against God, to blaspheme his name, and his tabernacle, and them that dwell in heaven.” (Revelation 13:6 KJV).

Alcorn comments on this verse: “Our enemy slanders three things: God’s person, God’s people, and God’s place – namely, Heaven.”8 And, if this verse is saying what it appears to say, it seems to be evidence that someone is living up in heaven for Satan to slander. Of course, it is possible that the reference is merely to Satan slandering his brother angels who did not fall. If that is the case, there is no contradiction. The saved are sleeping in their graves, awaiting a resurrection, and the elect angels are being blasphemed along with their creator in heaven.

Others might suggest a dualistic approach to this text. They would agree that the bodies of the saved are in their graves, but think that those dwelling in heaven are the disembodied spirits of those same dead saints. The inference is that it is the spirits of departed saints who are being blasphemed. But, is there a way to deal with the statement apart from presupposing a philosophical construct like dualism? That theological view offers a short-cut explanation to the apparent contradiction. But is there an exegetical – not just a theological – solution to the apparent contradiction in these statements?

1. The saints are in their graves, awaiting a resurrection.

2. The saints are in heaven, being blasphemed by Satan.

My concern is more than academic. I feel that the distinctions imposed upon theologians by philosophical constructs like dualism offer too easy an answer to textual issues like these, and – in doing so – tend to hide the meaning of the texts rather than explain them. At any rate, that is the hypothesis I will be using as I examine this text.

THE BACKGROUND OF REVELATION 13:6

Revelation as a whole is a presentation of an apocalyptic vision from Christ. It contains a short introduction, placing its human author (John) in his first century context (1:1-8). It concludes with a warning from Jesus that he is coming soon, and advice from John not to abuse the book (22:8-21). But the rest is composed of an apocalyptic vision. The content of the vision as a whole is described in 1:19.

What John had seen was a vision of Jesus, symbolically depicted as among seven churches of Asia Minor.9  John had been an elder, exercising apostolic authority over those seven churches, and probably many others. John was concerned about the welfare and authenticity of those churches, as well as their ultimate destiny. It was a comfort for John to see Jesus overseeing those churches.

The things that were at the time of the vision was also a revelation about those seven specific churches.10The Lord spoke into the lives, leaders and ministries of those seven metropolitan centers of Christian witness. He warned those who were found lacking, and encouraged those who were suffering for their faith. The Lord was doing what John wanted to do, but could not because of his banishment on Patmos.

The third element was the apocalyptic vision of the future Christ had to share.11 Here, he pulls back the blinders that John and everyone else had on because of their lack of knowledge about future history. Jesus portrays thousands of years of history, from John’s time to his own second coming, and beyond. He does this using highly symbolic language, in the apocalyptic style of Old Testament books like Daniel and Zechariah.

So, Revelation 13:6 should be read not like a descriptive statement within the narratives of the Gospels, nor should it be taken as prescriptive, as many statements within the epistles are. Instead, it is part of a statement about future history described using symbolic language. That does not make it any less true, but it does make it necessary for readers to be careful in how we interpret it.

To fully appreciate what is being said in this verse, we must place it within the section of the apocalyptic vision where it is found. The vision itself shows all of world history as having been written on a single scroll.12 The scroll contains four sections. In New Testament times, a writer could write only as much as he could put on the scroll he had. If he wanted to add to his work, he could attach one scroll to another. Ostensibly, this would be doubling the potential size of his work. Actually, it would be quadrupling the available size, because scrolls were written on both sides. So, the fourfold vision Jesus gave to John appeared to be depicted upon a double scroll.

Each section of the vision begins with a verbal clue, so that readers can catch the shift in historical context. This is important because the fulfilment of each section does not simply follow historically from where the last one left off. So, Jesus provided John with clue words which indicated that a new section of the vision was now being communicated. Note the similarities between these statements:

1. “After this I looked, and behold, a door standing open in heaven!”13

3. “After this I looked, and the sanctuary of the tent of witness in heaven was opened”15

The fourfold scroll is the history of how Jesus will deal with his three major adversaries. These are identified as the beast, the false prophet, and the dragon (Satan).17 In the first section, the beast and his fate predominates. In the second and third sections (which are contiguous) the false prophet’s fate predominates. In the fourth section, Satan’s fate predominates. Historically, the beast has been understood as the political powers assailed against Christ. I believe it is more specific: a spiritual being behind the political attempts to overthrow Christ. Likewise, historically the false prophet has been identified with false and apostate religions. I believe the false prophet is an actual spirit being who has led those attempts to replace Christ – from both outside and inside Christendom. The third major adversary is Satan, who is the mastermind behind the other beings’ actions as well.

With this general framework, it is now possible to see the statement of Revelation 13:6 in its proper setting. The immediate literary context is Revelation 13:1-10, which describes a great beast who comes out of the sea. The beast is described in language that imitates that of Daniel’s prophecy of the four beasts,18 except that this beast appears to be a composite of all of the beasts of Daniel’s vision. Daniel explained that his vision was about dominion being taken away from these earthly kingdoms, and given to the Son of Man forever.19 Now, John sees the same thing. He sees the kingdoms of the earth as one great beast, battling Christ for dominion of the earth.

It is in that context that we read of the beast blaspheming those who dwell in heaven. A more literal rendering of the Greek sentence might be helpful to show its structure: “And he opened his mouth to blaspheme God: blaspheming his name and his tabernacle – the ones dwelling in heaven.” Crucial to interpreting this statement is determining the referent of the definite article tous, which I have rendered “the ones.” Does this article introduce a new object to blaspheme? Several English versions seem to imply this, by their addition of the word “and” where it is not found in the original Greek text.20

Several other English versions imply that the phrase introduced by the tous is in fact simply an explanation of the second blasphemy target.21 These also supply an English phrase, “that is” so that the inferred meaning is that “the ones dwelling in heaven” and “his tabernacle” refer to the same thing.

Two of the modern versions manage to render the verse without adding any extraneous words.22 They simply translate the phrase beginning with tous as “those dwelling in heaven.” It is possible, then, to read the text as referring to two things being blasphemed: God’s name and his dwelling place. The phrase “the ones dwelling in heaven” simply combines the two.23

So, we have three possible interpretations of “those dwelling in heaven.”

1. The phrase introduces a third group of things being blasphemed: dead believers living in heaven.

Before this first interpretation is accepted, we would need to see some evidence elsewhere in Scripture where believers are said to dwell in heaven presently. Some passages have been brought forth as if they provide this type of evidence, but further scrutiny of those texts has shown that they do not.24

2. The phrase explains the meaning of the term “tabernacle,” saying that it means dead believers living in heaven.

Before this second interpretation is accepted, we would need to see evidence elsewhere in Scripture where believers are presently referred to as the tabernacle of God. The term skéné is found in 20 verses in the New Testament.25 Breaking those references down by referent, the term implies…

In fact, the final reference to skéné in this book is quite revealing:

“And I heard a great voice out of heaven saying, Behold, the tabernacle of God is with men, and he will dwell with them, and they shall be his people, and God himself shall be with them, and be their God.”32

God does plan to tabernacle again among human beings as he did in the days of the exodus, and as he did when Christ was among us. But that time is not now. That time will not happen until after God has brought heaven down to us, and we are living in his new heaven and new earth. Until then, it is not appropriate to speak of believers as being God’s tabernacle in heaven. It is true that God has blessed believers on earth with his indwelling Holy Spirit.33 But that blessing does not qualify us to be called his skéné in the particular sense implied in Revelation 13:6.

This leads to the third option for explaining the meaning of “those dwelling in heaven.”

3. The phrase combines the two things said to be blasphemed: God’s name and his dwelling place.

The simplest, best understanding of the statement in Revelation 13:6 is that the great beast will blaspheme God – both his name and his dwelling place (heaven). Both God’s name and his dwelling place are in heaven. But the beast will attack them both with blasphemies uttered on earth. He will appear to win the battle for a while, because he will have been given authority over the nations. The power the secular political world presently wields against Christ’s kingdom is significant. But God’s people are called to persevere, because the final victory will be the Lord’s.