You are here: Home / Bible / New Testament / Five questions to ask while reading the rich man and Lazarus story 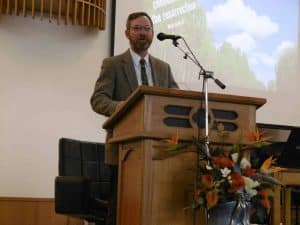 I love the story of the rich man and Lazarus, but not for the same reason that many others do. It is a story that we can all easily picture. We see a fat rich man, clothed in a purple robe, feasting all the time in his big house, while just outside his door a beggar waits and starves. Then they both die, and things change drastically. The former beggar is now welcomed into a very comfortable place. But the former rich man is burning in agony.

The rich man and Lazarus is the last in a string of stories Jesus told in response to the Pharisees criticism of the riffraff that Jesus was associating with.1 We can read those stories in Luke 15-16.

Jesus got to the point of these stories when he told those Pharisees “You like to appear righteous in public, but God knows your hearts.”2 The parable of the rich man and Lazarus highlights the fact that some people think their eternal destiny is safe because they are currently doing ok. But God is looking for people who know they need him. He is looking for people who repent of their sins and trust in his gospel of grace.

But even though we all mostly get that point, the incidentals of the rich man and Lazarus story seem to side-track many of us. We start out with a clear view of rich Pharisees, but wind up with scary pictures of flaming torment in the afterlife. Our reading of the parable tends to get us off target to its original purpose.

Here are five questions we need to keep in mind, so that our reading of the parable of the rich man and Lazarus stays on target.

1. Who is the original audience of the story?

Our typical approach to familiar biblical texts is to immediately apply everything personally. Usually, this does no major damage, because all of scripture is intended for personal reflection and admonition. But there are some statements in scripture which we are actually misreading if we do not stop to consider who the intended audience was.

Take, for example, the well-known mantra “God will supply all your needs.” We hear that kind of thing bantered around often, usually with some kind of assurance that God will always take care of Christians. But here is the actual scripture text in its context:

“I have received full payment, and more. I am well supplied, having received from Epaphroditus the gifts you sent, a fragrant offering, a sacrifice acceptable and pleasing to God. And my God will supply every need of yours according to his riches in glory in Christ Jesus.”3

The promise was to the Philippian Christians who had given to Paul to support his missionary work. It was not a blanket theological statement meant to assure all Christians that they would never lack anything. It was not intended by Paul to be a set of animistic power words that people could keep telling themselves so that they could get themselves out of poverty. The original audience was generous Christians who supported missionary work. When we divorce the text from that context, and make it “more personal” we are actually abusing the text.

Actually, every one of the parables Jesus taught as recorded in Luke 15-16 targeted the Pharisees and exposed their incorrect assumptions and expectations.

If Jesus were giving theological instruction to answer questions about God’s eschatological judgment of sinners, we would expect him to address those teachings to true believers. It does not make sense for Jesus to focus such specific theological instruction on the hypocritical Pharisees. They had their own ideas about God’s judgment, and they were not inclined to believe anyone else – even if that person was to be raised from the dead.4 So, teaching them what the bible says about judgment day would be a waste of time. Not so, the disciples. They wanted to know the truth that Jesus was teaching. They recognized that he had the words of eternal life,5 and they were determined to stay loyal to him and his words.

2. So, what exactly did Jesus teach his disciples about the timing of God’s judgment of sin and sinners?

In the story of the rich man and Lazarus, the judgment of both main characters takes place immediately at death. It would take place in the intermediate state, what the Bible calls Hades. But what Jesus taught his disciples about the timing of judgment is totally different. He taught them of a coming day of judgment, which the evil dead will be raised to experience. This day of judgment would not be each individual’s day of death. It would be an eschatological last day event. On that last day, all who have ever lived will be gathered together and judged together, although some will receive less punishment than others, because each will be judged fairly. Until that day, all who have died will be dead in their tombs, awaiting the voice of Jesus who will bring them back to life, and determine their eternal destiny.

3. And, what did Jesus teach his disciples about the nature of God’s judgment on sin and sinners?

In the parable of the rich man and Lazarus, when both main characters of the story died, their bodies were carried away to Hades (the intermediate state). While there, the former beggar experiences comfort and the joy of being beside Abraham. Far off in the distance, the former rich man is experiencing anguish, being tormented by flames, along with the terror of knowing that his five brothers are guilty of the same sins as he was, so they are also going to experience the same judgment. He desperately wants to warn them, so he pleads for Abraham to raise Lazarus from the dead so that he could go and warn his living brothers. Abraham says no, because – and this is Jesus’ point – “If they do not hear Moses and the Prophets, neither will they be convinced if someone should rise from the dead.”23 There are many facets to that story that speak into the lives of first century Pharisees and expose their underlying assumptions about themselves and what they believe about judgment.

But there is absolutely nothing in that story that coincides with what Jesus himself taught about the nature of God’s judgment. The hell that Jesus warned people of was not Hades, but Gehenna, the lake of fire that destroys people — body and soul. When people are thrown into that fire, they do not worry about being thirsty or have a long distant talk with Abraham – they perish. They are killed forever. They experience what Paul called eternal destruction,24 — what John called the second death.25 No doubt there will be much anguish and torment experienced by the lost on judgment day. But the ultimate purpose of judgment day is not to prolong life forever but to end it forever. To use the parable of the rich man and Lazarus to deny that truth is to abuse the text. The clear, systematic teaching of Jesus to his followers is that the final judgment is destruction.

4. Also, what did Jesus teach his disciples about what happens at death?

The clear, systematic teaching of Jesus to his followers is that when we die, we are asleep in our tombs until awakened by his voice on resurrection day. This resurrection is essential for both the just punishment of the wicked and the eternal reward of the saints.

But the parable of the rich man and Lazarus – which was never intended to teach anyone what really happens at death – has been ripped out of its context and used to teach someone’s idea of an intermediate afterlife. In this intermediate afterlife, people are punished before judgment day, and rewarded before resurrection day. From a distance, they get to watch all their unbelieving friends and relatives suffer in agony for ages, and be helpless to do anything about it. Only the Pharisees could have hatched such a despicable doctrine. It is not taught in scripture, and it is not part of God’s plan.

5. Finally, what is the evangelistic purpose of the parable?

Please note carefully that I am not asking “How can we use this parable to scare people into professing Christianity?” I am not interested in how reading this parable might keep people up at night until they finally cannot stand it anymore so repent of their sins. My question is different. I am asking why Jesus told that story to the Pharisees, and why Luke included it in his Gospel.

You see, the Pharisees were not shocked by the concept of someone suffering in Hades. That is what they believed. What shocked the Pharisees is the fact that the rich man was thrown into the fire, not Lazarus! They believed that God continues to bless people in the afterlife just as he blesses them in this life. So, they expected Jesus to explain how the rich man was welcomed to Abraham’s side. Instead, they heard Jesus say that that dirty, lazy beggar got in when the rich man did not.

Jesus’ evangelistic purpose for telling the story was to shock the Pharisees into realizing that the riffraff that was hanging on Jesus’ every word had discovered the key to getting saved, but that they (the self-righteous Pharisees) had not. Jesus was teaching through parables what the Pharisees refused to accept: that God values those who seek him, not those who think they already please him. Look again at all five parables Luke included in this section and you will see that theme.

So, you see, there is a clear evangelistic message in all of these parables, and it is firmly placed in the literary context. It is in response to those who – like the Pharisees and scribes, are always grumbling about the “sinners” Jesus accepts.34 I love the story of the rich man and Lazarus, but not for the same reason that many others do. The fact is, you have to recognize you are lost before there is ever any hope for your salvation. The picture of righteous Lazarus as a beggar expertly demonstrates that reality.