You are here: Home / Bible / Old Testament / rescuing the text 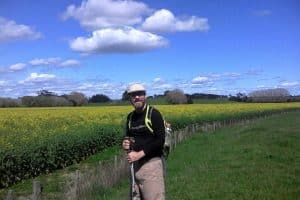 In a previous article, I examined all the instances of the Hebrew words shamayim and erets in Genesis one. I found that these words are translated variously in the different popular English versions, and their renderings almost invariably reflect a cosmology that is not at all implicit in the text itself.  I concluded that we owe it to the next generation of truth seekers to rescue the text of scripture from the traditional renderings that obscure its meaning.  The biblical concepts reflected by shamayim and erets (when used together) is a good example of this obligation.  When people read words like “heaven and earth” they tend to envision a far-distant divine abode, and a planet. But, we saw in Genesis 1 that each time these words appeared in Genesis 1, they were best translated “sky and land” because they reflected a simpler cosmology of everything humans see, categorized as everything around us (shamayim = sky) and everything below us (erets = land).

Continuing to read Genesis bears this out. Moses concludes the creation account in Genesis 2:1-4.

When read like this, the passage serves as an adequate summary of the text which came before, because Genesis 1 was all about God forming the land and the sky, and filling both with a vast army of creatures, and filling the land with vegetation. But using the word “heaven” instead of sky leads people to imagine the creation of the angels to fill that far distant place. In other words, the wrong word used to translate shamayim redirects the reader to an entirely different subject.  While using the word “earth” does not redirect the reader in the same way, it still introduces the concept of the earth as a planet. The cosmology of planets in a solar system is not directly alluded to in the creation account. The word erets implies not a particular planet among many, but all the land below our feet. Thus, the word “earth” is not appropriate for the modern reader, because the primary connotation of that word’s semantic range is “the 3rd planet from the sun; the planet we live on.”1 So, while the word “earth” may have been an appropriate English translation in the past, it is inappropriate today, because it conveys a meaning that would not have been in the minds of the original readers of Genesis.

The next time the words shamayim and erets appear together in Genesis is a series of texts describing the flood in the days of Noah.

“Because notice, I will bring a flood of waters upon the land to destroy all flesh in which is the breath of life under the sky. Everything that is on the land will die” (Gen. 6:17 JDV).

“and seven pairs of the birds of the sky also, male and female, to keep their offspring alive on the face of all the land” (Gen. 7:3 JDV).

“And the water prevailed so mightily on the land that all the high mountains under the whole sky were covered” (Gen. 7:19 JDV).

“He wiped out every living thing that was on the face of the ground, man and animals and creeping things and birds of the sky. They were wiped out from the land. Only Noah was left, and those who were with him in the ark. And the water remained on the land 150 days” (Gen. 7:23-24 JDV).

Because of the nature of the flood narrative, it is clear that all the references to the sky and land in these texts are just that. In other words, there is no reference at all to the divine residence of God usually referred to as “heaven.” The word “sky” is really the only word that is appropriate.

Likewise, since it is clear that what was flooded was the land that had been created (and referred to in Genesis 1), there is no need to describe that land with a word which primarily connotes a planet in our solar system.

But compare how the popular versions render these words:

“Because notice, I will bring a flood of waters upon the land to destroy all flesh in which is the breath of life under the sky. Everything that is on the land will die” (Gen. 6:17 JDV).

“and seven pairs of the birds of the sky also, male and female, to keep their offspring alive on the face of all the land” (Gen. 7:3 JDV).

“And the water prevailed so mightily on the land that all the high mountains under the whole sky were covered” (Gen. 7:19 JDV).

“He wiped out every living thing that was on the face of the ground, man and animals and creeping things and birds of the sky. They were wiped out from the land. Only Noah was left, and those who were with him in the ark. And the water remained on the land 150 days” (Gen. 7:23-24 JDV).

All these popular versions consistently use the word “earth” as a translation for erets, in spite of the term having a primary connotation of something else besides the land which is described as having been flooded with water. That, in itself, is not a major problem, since a planetary flood does accomplish the same effect as a flood that covers all the land.

But, look how varied and how inconsistent the translation of shamayim is.  The same word in the same context is variously translated “heaven,” “heavens,” “sky,” and “air.”  In some versions, the term is not translated at all, yet that practise is not consistent in one version, or in the same verse.  It is not difficult to see how these versions would have problems translating shamayim in this context, since they almost invariably translated the term as “heaven” or “heavens” in Genesis 1, and in these texts it is clear that what is being flooded is not the divine residence. One of the objectives of translating is keeping consistent. Having established a precedent in their translation of Genesis 1, theses popular versions are having trouble remaining consistent with that precedent.

The post-flood narrative contains another verse which mentions both shamayim and erets.

“The fear of you and the dread of you will be upon every beast of the land and upon every bird of the sky, upon everything that creeps on the ground and all the fish of the sea. They are placed into your hand” (Gen. 9:2 JDV).

Noah is told that every sentient creature capable of fearing would fear him and all his descendants. This list would include every beast of the erets and every bird of the shamayim. It would include the things that creep on the ground and the things that swim in the sea. All of these creatures are under the dominion of humanity. Noah is told that they are placed in his hand.

I ask, is it appropriate to include the angels in this list? God didn’t. He specified all the birds of the shamayim.  It is clear that the term merely means the sky in this context. Yet, so far, we have not seen a single example where shamayim has to mean anything other than “sky.” We have also seen that the term “land” is more appropriate than “earth” to translate erets since that translation is appropriate for every single text we have observed. Using the term “land” also avoids the cosmological baggage of the term “earth.”

When it comes to these two Hebrew terms, rescuing the text means using simpler language, and language that can be used consistently throughout the same translation. The text is then rescued from terminology which can confuse by adding ideas not intended by the original author.

This is the first – and necessary — step in a process that can eventually not only clear up our confusion about the text of scripture, but also rescue us theologically. Once we have examined all of the scripture with the best and most consistent translation, we can bring that reading to bear on the questions that we ask about life and death, human destiny, the coming kingdom, hell and – yes, heaven.