You are here: Home / Theology / Heaven | Afterlife / wading through the “simplicity” 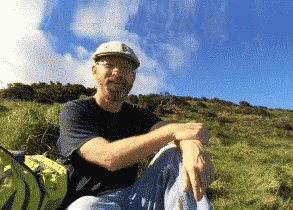 My last hike with my wife turned out to be a bit of a struggle. We waded through tall grass that tended to cling to our legs and slowed us down.  We had planned on a short day hike, but did not expect to have to fight for each step.

That hike reminds me of a recent comment on one of my other articles in Afterlife. The comment claimed to portray the simplicity of the traditionalist approach to the intermediate state. The comment is indicative of the kind of responses often posted. They want to say that their position is the simple truth of scripture, but the more the statements are examined, the more complicated they get.

“Job and Solomon when they are speaking about death are speaking from an earthly view how death looks here “under the sun” is how death looks for an unbeliever. You have to read all of it and know who they are talking to and what about. It’s quite simple “whosoever believeth in me will have EVERLASTING life” and to the thief on the cross he said “TODAY you shall be with me in paradise” the body goes to the grave the soul “returns to the Lord who hath given it” “to be away from the body is to be present with the lord” the body goes to the grave and is “raised incorruptible” at the time of rapture.”

I appreciate comments like this because they reveal the disjointed and complicated theological basis behind some objections to conditionalism.  I am trying to wade through the “simplicity” of this argument. My responses to it will be in the second person:

You say that Job and Solomon describe “how death looks for an unbeliever” – but Job and Solomon were not unbelievers. They were inspired by the Holy Spirit to put his words in scripture. In fact, you (mis)quote Solomon in Ecclesiastes 12:7. So, which is it? Is Solomon describing an unbeliever’s perspective or not?  I actually have read all of Job, and all of Solomon (Song of Songs, Proverbs, and Ecclesiastes), and I am aware of who their audience was, and I find nothing in Job or the Solomonic corpus that requires a conscious intermediate state.  Solomon wrote about life “under the sun” because he was a scientist, and that is the only life he knew about, and the only life he could study. His lack of information about what you probably would call “heaven” is not evidence that your position is correct.

You (again) misquote Jesus, who (in John 3:16) said “For God so loved the world, that he gave his only begotten Son, that whosoever believeth in him should not perish, but have everlasting life.” You emphasized the word “everlasting” as if that proves that everyone will live eternally, but Jesus’ point was that only believers will receive this gift. Unbelievers will perish.  There is nothing simple about John 3:16. It is a theological masterpiece, explaining the gospel in a very profound way. But John 3:16 says nothing about the intermediate state, so it is inappropriate to use it as evidence against my understanding of Ecclesiastes 9:5.

Solomon wrote all of Ecclesiastes, and it makes sense to read it all together. Yes, Solomon did say that at death the dust (the word he used for body) would separate from the spirit (the word he used for the breath in the living body) would return to God, but at no time does Solomon suggest that anyone is conscious after this happens. Solomon is merely describing the reversal of the process Moses described in Genesis 2:7. That is where Moses explains that God created the first human being by fashioning a body out of the dust of the ground, and breathing into his nostrils the breath of life, and the result was the creation of a living soul. Solomon explains that at death the life leaves the body, and the living soul becomes a dead soul. The soul does not go anywhere. That is in complete agreement with Ecclesiastes 9:5, which says that the dead know nothing.

Then, your “simple” argument flies to Luke 23:43, where Jesus appears to be promising the penitent thief that the two of them would be together in some place called paradise on that particular day. I have explained in other articles that Jesus could not have made such a promise. He did not go to paradise that day. The Bible is quite clear that Jesus died that day, and he went to the tomb, and was unconsciously present in hades (the state of the dead) until his resurrection on the third day. English translations of Luke 23:43 fail to take into account the missing Greek word (hoti) that should have been present in the text if Jesus was promising a reunion with the thief on that particular day.  What Jesus actually promised is something like “Today I guarantee you that we will be together in paradise.” He was not denying the reality of death, neither for himself nor the thief. He was merely responding to the thief’s request to be remembered on the day of his return, when he sets up his eternal kingdom (Luke 23:42).

Your final argument combines two Pauline passages. In 2 Corinthians 5:6, 8, Paul states that he is presently at home in the body, but absent from the Lord. In 1 Corinthians 15:52, Paul says that when Jesus returns “the dead shall be raised incorruptible, and we shall be changed.”  Notice that he says the dead (not just their bodies) will be raised incorruptible. Some of the modern translations add the words “body” or “bodies” to the text, but those words are not there in the original Greek. What Paul says in 1 Corinthians 15 is that the whole person waits in the grave until the resurrection at Jesus’ return.

You see, your “simple” solution (as I see it) is a complicated addition to scripture. It replaces the single blessed hope of the second coming (Titus 2:13) with a complicated four-fold hope of separation of body and soul, presence in heaven with the Lord, resurrection and reunion of body and soul, and then eternity in heaven again.  There is nothing simple about that.