You are here: Home / Bible / Old Testament / Limited to the visible 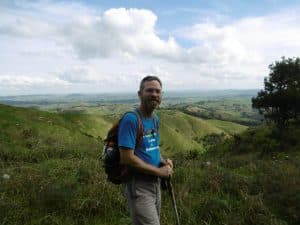 A study of the Law and Prophets in the Old Testament has shown that the normal, usual meaning of the Hebrew words shamayim and erets is the sky above and the land beneath.  The popular concept of heaven as the place where God lives is almost entirely absent – at least it does not fit into what is usually being expressed by the biblical authors. Likewise, the idea of earth as a planet is not in view when the biblical authors use the word popularly translated earth.

But there is a third section of the divine Tanach.1 Besides the Torah and the Neviim, the Old Testament also has a section consisting of writings, or Chthuvim.  The Writings particularly interest those doing word study because they contain parallel poetry. In parallel poetry, the same idea is expressed in two separate sentences. One can get a good idea of the meaning of a word or phrase by seeing how that word or phrase is paralleled in the next sentence.

For the hypothesis mentioned above to be sustained, the parallel poetry needs to reflect the idea that the shamayim is limited to the visible sky above us, and the erets is the visible land beneath us.

“When I look at your heavens, the work of your fingers, the moon and the stars, which you have set in place” (ESV).

Notice how the phrase “your heavens” (shameycha) is paralleled with “the moon and stars.” The author’s meaning is plain. He is looking at the sky above him, where the moon and stars are.  This great God who created this immense, awesome sky has decided to elevate small, insignificant humanity, and give him authority over his creation.

The NLT renders the text “When I look at the night sky and see the work of your fingers– the moon and the stars you set in place–.”  The translators add the word “night” to complete the parallel thought. It is clear from any translation that the concept of “heaven” as the place where God lives is not indicated by the word shamayim here.

“The heavens declare the glory of God, and the sky above proclaims his handiwork” (ESV).

David’s psalm indicates the various ways that God has revealed himself. He starts with God’s revelation in creation (1-6), then moves to the revelation of the written word (Torah) (7-11), then finally God is revealed to the repentant as Saviour and Redeemer (12-14).

David uses shamayim to refer to the created sky above him, revealing God’s glory in the same way that an artist’s work reveals the talent of the artist. As Clayton puts it, “Many link the immensity of the universe to the greatness of God, the source whose power, knowledge, and wisdom were great enough to create it.”2 Of course, not all do. Some look at the immensity of the sky above and conclude that there is no creator – that it all just happened. But the eyes of faith see the created universe and conclude that there must be a creator, and he must be glorious.

For the point of this article, the definition of shamayim in Psalm 19 is limited to the observable created sky above us. It is not associated with any invisible or infinitely distant realm where only God resides. The shamayim can be seen. Yet, most major English translations insist on using the word “heavens” to translate the word. These translations obscure the meaning of shamayim in the text.

In Psalm 19:1, shamayim is being compared to raqia, the word used in Genesis 1 for the divider that God wrapped around the planet when he created it.

This divider was the visible universe above us. The Vulgate used the term firmamentum, suggesting something solid between two masses containing liquid. Thus, the KJV translated raqia as firmament. But Moses was probably emphasizing the fact that the raqia served as a supporting divider between the sky below it and the space above it, both of which would be called shamayim. Ezekiel mentions seeing this raqia in one of his visions, and seeing God’s throne above it.3  This fact is particularly important to this study because we usually use the term “heaven” as the place where God’s throne is. It is normally not visible, except (as in Ezekiel’s case) in a vision. But the shamayim and the raqia are visible, thus the term “heaven” is not as appropriate for them.

Because the raqia is above the land, it serves as a parallel to shamayim. Also, it was named shamayim. But, to avoid using the same word to translate both shamayim and raqia, modern translations often use “the heavens” for shamayim, and “the sky” or “the skies” for raqia. The NASB prefers to use the word “expanse” for raqia, and thus avoids the word “sky” altogether. In the translation above, I chose to render raqia as “divider” and shamayim as “sky.”  This helps to identify the two Hebrew terms, without associating either with “heaven.”

“By the word of the LORD the heavens were made, and by the breath of his mouth all their host” (ESV).

At first glance, this looks like an exception. After all, aren’t the hosts of heaven the armies of angels that inhabit it, surrounding the throne of God? Well, there certainly are legions of angels available for God to utilise them if he wishes.4 And the word tsava (host) does mean “army” in Genesis.5 But its meaning in the creation account (to which this verse refers) is something like “everything within the sky.” I translate Genesis 2:1 as “So the sky and the land were finished, and all the army of them.” But the army is an army made up of stars and planets. Several modern translations indicate this meaning in Psalm 33:6 as well.

The stars in the night sky are the visible shamayim at night. It is unfortunate that so many modern translations continue to use the word “heavens” for shamayim, because the word “sky” better reflects its meaning in so many contexts.

The NET renders this verse “For your loyal love extends beyond the sky, and your faithfulness reaches the clouds.” The verse compares God’s loyal love (chesed) with his faithfulness (emet). Both attributes of God are so extreme that they can only be described by pointing up to the shamayim, where the clouds are.  Nowadays, we can get into jet planes and soar above the clouds, but in the psalmist’s time, one could only reach the cloud line by climbing a high mountain.

If the word shamayim referred to the abode of God in heaven, this verse would prove problematic. It asks its readers to use the clouds of the sky as they wonder at the extent of God’s love toward them. The emphasis is not on a place far away as much as on a God who is near, whose grace transcends all expectations. The distance between the sky and the land is used to express the extremity of God’s loyal love. Psalm 103:11 contains a similar statement: “Because as high as the sky is above the land, so great is his covenant loyalty toward those who fear him.” See also Psalm 108:4.

This psalm shows by its parallel statements that “heights” (marom) is a synonym of shamayim.  It could be cited as evidence of either connotation in the semantic range of shamayim. But, like shamayim, marom is often used to express the idea of looking up. Mockers speak their mockery from on high,6 disaster comes when the high widows are opened,7 the suffering servant looks wistfully to the heights.8  There is nothing intrinsic in the word itself to refer to a place beyond the sky that is invisible. It is a direction, not specifically a location.

The idea of earth as a planet is not in view when the biblical authors use the word popularly translated earth. This can also be demonstrated by looking at the parallels to erets in Hebrew poetry.

“All the ends of the land shall remember and turn to the LORD, and all the families of the nations shall worship before you.”

The ends of the land are the beaches, the extremities where the land ends and the seas begin. These are compared to all the families of the nations. The idea is that there will be no land where God will be forgotten, and no family where he is not worshipped.

“Their voice goes out through all the land, and their words to the end of the continents.”

Erets is often paralleled with tevel,9 which is often translated “world.” This leads to the impression that both terms refer to the planet. But the word tevel connotes the continents.10 It is another term for the ground upon which we are standing. Both of these terms express the idea of extremity of horizonal distance, not planetary location.

Here, again, the idea is not a planet, so “earth” is not the best translation choice. The NLT translators chose “world” because it better describes what the author wants to convey.

“The LORD reigns; let the land rejoice; Let the many islands be glad.”

It would not make sense for the poet to compare islands with a planet. Instead, the psalmist seems to be calling on the whole land, including its distant islands, to rejoice in God.