You are here: Home / Book Review / Help for a hard parable 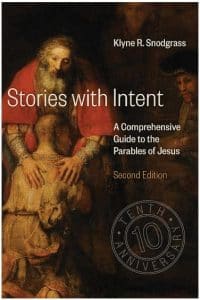 Jefferson Vann reviews a guide to the interpretation of parables and is impressed with the book’s explanation of The Rich Man & Lazarus (Luke 16:19-31).

When Stephen Wright reviewed Klyne R. Snodgrass’ Stories with Intent: A Comprehensive Guide to the Parables of Jesus in 2009, he said the book was “as close to an authoritative reference work on the parables as we shall see for years to come.”1 It has been ten years since it was initially published, and a new second edition2  has just now been placed on the JETS “books received” list. It contains a new chapter which addresses recent scholarship. The book as a whole is a healthy treatment of parables in general.

Snodgrass views the parables of Jesus as stories that he told with a particular intent, hence, the title. He laments that people “have commandeered the parables to express whatever agenda (they) have.”3 They have manipulated the stories “for all kinds of theological, political and social purposes.”4 When we look at parables, we need to keep in mind why Jesus told them, the audience he was speaking to, and his reason for teaching that particular audience via parables. Anything else we teach using parables that does not correspond to his communicative intent is a “rewriting of the parables.”5

To understand parables, one has to realise that they do not depict reality as it is. They project stories from “an imaginary world that reflects reality.”6 While “a few may draw on historical events, … they do not depict true stories.”7  They “often contain hyperbole, and tend to be pseudo-realistic.”8  Due to this disconnection, Snodgrass warns that “if you cannot validate the teaching you think is in the parable from nonparabolic material elsewhere in the Gospels, you are almost certainly wrong.”9

Many of the parables – both biblical and extra-biblical – contain what is technically termed a nimshal, “an explanation that hammers home the intent.”10 When this explanation is included by the Gospel writer, it helps readers understand Jesus’ primary intent in giving the parable.

On The Rich Man & Lazarus

Snodgrass’ treatment of the Rich Man & Lazarus (Luke 16:19-31) is worth reading. He categorises the parable as “a single indirect two-stage narrative parable that serves as a warning.”11 It is a single narrative that is told in two stages. The first is the two characters before death; the second after death. The warning is against the rich who fail to use their wealth to help the poor and needy. In this parable, a reversal has occurred. The rich man, who perhaps thought himself blessed by God discovers that he is in torment after death. Poor Lazarus has been exalted to Abraham’s side instead. The nimshal, however, is Luke 16:31.

“But he told him, ‘If they don’t listen to Moses and the prophets, they will not be persuaded if someone rises from the dead.'”(CSB).

Snodgrass concludes that the warning implicit in the parable is twofold. It warns of judgment for the use of wealth and the sufficiency of scriptures. The rich are warned that they are responsible for the poor. They are their brother’s keeper, even when that brother is begging at their door. They are also warned that there is no excuse for neglecting the poor, since the whole of the scriptures teach that those who are blessed should be generous toward those who have need.

I was particularly interested in how Snodgrass would view the apparent eschatological factors of the parable. He argues against the notion that it was a historical account by showing that Luke certainly depicted it as a parable.12 He argued against associating the parable with the events depicted in John 11. And he said that “the nature of the story does not allow it to be taken as an actual description of the future life.”13 But he stopped short of saying that the parable had no eschatological significance. I agree. The imaginary world that the parable shows us depicts an intermediate state where people are conscious of punishment. When Jesus gave nonparabolic instruction to his disciples about the intermediate state, he taught that those in that state are “sleeping” indicating lack of consciousness.14 He is not contradicting that teaching with this parable. Instead, he uses this parable to teach us all that there will be a judgment day, and those who are financially blessed in this life will be condemned if they never use those blessings to bless others.