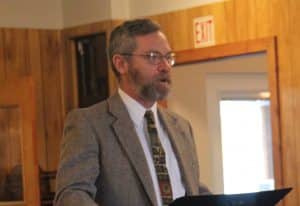 When traditionalist theologian Arthur W. Pink argued for the perpetual duration of hell, he conceded that the terms often thought to imply perpetuity are simply cultural “time terms.” But he argued that when the biblical authors used those terms, they are “most assuredly… timeless.”1 He implied that the use of the terms in the Bible always imply universal human immortality as a given.
Shall we put that assumption to the test? We will survey all the biblical uses of one of those terms. The phrase εἰς τὸν αἰῶνα appears 28 times, in 27 verses of the New Testament. Pink was under the impression that the biblical authors used these terms in a different way than the secular and pagan writers. It should be quite evident if that were the case.

Both Matthew and Mark use the phrase in recording Jesus’ curse of the fig tree. Matthew records Jesus saying μηκέτι ἐκ σοῦ καρπὸς γένηται εἰς τὸν αἰῶνα “may no fruit happen from you permanently.”2 There is no special biblical use of the phrase here. Jesus is merely praying that the current state of unfruitfulness be extended for as long as the tree stood. He certainly did not mean that the tree itself would last forever. Matthew records that the tree withered and died at once. The use of εἰς τὸν αἰῶνα does not always signify an eternal existence!

Mark also records Jesus speaking to the tree and saying μηκέτι εἰς τὸν αἰῶνα ἐκ σοῦ μηδεὶς καρπὸν φάγοι “may no one eat fruit from you permanently.”3 Neither the tree, nor the potential eaters have to be alive forever for that prayer to be answered. There is no eternal existence implied in this curse, and no special use of εἰς τὸν αἰῶνα.

Mark also records another curse from Jesus – of sorts. When Jesus talks about those guilty of blaspheming the Holy Spirit, he says οὐκ ἔχει ἄφεσιν εἰς τὸν αἰῶνα, ἀλλ᾽ ἔνοχός ἐστιν αἰωνίου ἁμαρτήματος “they will not have forgiveness permanently, but are guilty of a permanent sin.”4 The permanent sin will lead to permanent lack of forgiveness. Someone who has no forgiveness has to pay the penalty for his sin. That penalty is death.5 With no chance of forgiveness, that death will be permanent. There is no eternal existence implied in this curse either, and no special use of εἰς τὸν αἰῶνα.

Luke’s only use of εἰς τὸν αἰῶνα is in Mary’s Magnificat, where she praises God for keeping his promise to Abraham and his seed. She says that God keeps that promise permanently.6 Since she is describing God, her use of εἰς τὸν αἰῶνα has no bearing on the question of the human soul’s consciousness after death, and certainly no bearing on the question of whether the lost will survive death.

John’s first use of the term is when he records Jesus’ promise to the woman at the well. He tells her that whoever drinks water that he gives οὐ μὴ διψήσει εἰς τὸν αἰῶνα, “will certainly not be thirsty permanently” but will have ζωὴν αἰώνιον “permanent life.”7 In the text, Jesus does not say when these fortunate recipients will receive that permanent life. But he does say that the promise of life is conditional. Those who do not drink from his well will not have that permanent life. So, once again, we have Jesus using the term in such a way as to imply the opposite of what Pink suggests – that εἰς τὸν αἰῶνα is a new biblical revelation of universal human immortality.

John’s next two uses of the phrase come as he records Jesus’ reference to himself as the bread of life. He promises that those who eat that bread will ζήσει εἰς τὸν αἰῶνα “live permanently.”8 Again, he does not say at what time those who eat the bread will enjoy the fulfillment of this promise. He does not say they are already living permanently. He says they will live permanently. ζήσει is future tense of ζάω. So, neither of these “bread of life” texts suggest any kind of present tense universal immortality.

The lone verse which contains the phrase twice is one where Jesus explains the difference between himself and the sinners around him. They are slaves to their own sin, and slaves do not stay in the Father’s house permanently. But he is the Son, and the Son stays in the Father’s house permanently.9 Since this passage emphasizes Jesus’ exclusive relationship with the Father, it can hardly apply to the question of human nature as a whole.

The promise that Jesus gives the believer is that οὐ μὴ θεωρήσῃ εἰς τὸν αἰῶνα “he will certainly not experience permanent (death).”10 Instead, he gives them permanent life, and οὐ μὴ ἀπόλωνται εἰς τὸν αἰῶνα “they will not be destroyed permanently.”11 But is Jesus saying that those who belong to him will never die (per so many translations of this text)?

Jesus clarifies the matter in the next chapter, where he converses with Martha about the resurrection to come. He tells her that whoever believes in him, even if he dies (like Lazarus had) he will live (like Lazarus did).12 How did Lazarus live? He lived by being raised from the dead. Jesus explained that everyone who is now living and believing in him οὐ μὴ ἀποθάνῃ εἰς τὸν αἰῶνα “will certainly not die permanently.”13 So, Jesus is not suggesting that believers never die. He is promising that believers will not be destroyed permanently. If they die as Lazarus did, their deaths will be interrupted by a resurrection, as Lazarus’ was.

When the crowd objected to Jesus as Messiah because he predicted that he would be lifted up in death, they did so because they knew that the real Messiah would μένει εἰς τὸν αἰῶνα “stay permanently.”14 They had no place in their theologies for the cross. But this is yet another example of the phrase being used of Christ. It says nothing about a supposed eternal nature in humanity as a whole, nor does it refer to heaven or hell.

When Peter boldly forbade Jesus from washing his feet εἰς τὸν αἰῶνα,15 he changed his mind immediately when he discovered that it was necessary, and that he would understand it later. So, he wound up asking Jesus to wash his hands and head as well. But the most that this passage tells us about the phrase is that it sometimes can be rendered “never” in English. Every major modern translation renders it thus. The phrase does not imply any perpetual process here. It refers to a suggested process which is never allowed to start.

When Jesus promises the gift of the Holy Spirit, he says that this comforting presence would be among his disciples εἰς τὸν αἰῶνα “permanently.”16 Yet, once again, we see no suggestion in the use of the phrase that the disciples would live forever. The most that this passage teaches is that the Holy Spirit is immortal, not that the mortals he comes alongside are.

Paul used the expression εἰς τὸν αἰῶνα to describe how long he planned on abstaining from meat in order to prevent his brother from stumbling.17 He did not imply that he was going to abstain from meat for eternity – only that he would do so as long as eating meat interfered with the spiritual health of his peers. His use of the phrase implied no reference to the duration of the final states.

The Book of Hebrews

The letter to the Hebrews contains the most texts which use the phrase. There are seven times when εἰς τὸν αἰῶνα appears, and not a single text refers to human beings. There is a reference to God’s permanent throne,19 and one to Christ’s permanent perfection.20 The remaining five references are to Christ’s Melchizedek priesthood.21 The author of Hebrews argues that Christ’s priesthood is better that the Aaronic priesthood because it is permanent, not temporary. The reason is that because μένειν αὐτὸν εἰς τὸν αἰῶνα “Christ lives permanently”, he ἀπαράβατον ἔχει τὴν ἱερωσύνην “holds a permanent priesthood.”22 If the New Testament taught that all people live forever, this argument would be a contradiction. If Christ is the only human being currently living εἰς τὸν αἰῶνα, then there are no other immortal souls currently populating either heaven or hell.

Peter uses the expression once when he quotes Isaiah 40:6-8. Peter’s point was that believers have been born again with seed that μένει εἰς τὸν αἰῶνα “stays permanently” – the word of the Lord.23  But did Peter mean that believers are now immortal? No, he was quoting Isaiah, who maintained that unlike the Lord, all human flesh is like grass that withers when it dies. Only the word of the Lord stays.

John makes a similar statement about the truth that stays with believers and will be with them εἰς τὸν αἰῶνα “permanently”.24 This text, like all the others, can be easily dismissed, because it says nothing about human nature or any supposed eternal existence after death.

But the remaining text warrants closer scrutiny. John contrasts the world with its lust with the one who does the will of God. The world is παράγεται “passing away,” but the one doing the will of God μένει εἰς τὸν αἰῶνα “stays permanently.”25 This is the only use of that expression in the entire New Testament which applies to human beings. Does it imply human immortality – at least for believers? If it did, it would contradict all the other passages we have seen that insist that Christ alone currently “stays permanently.”

Instead, the context comes to the rescue. In 1 John 2, believers are encouraged to become less attached to the world they are living in, and more attached to what God wants. In that context, John encourages believers by saying that this present world is passing away, but God’s plan will outlive it. The believer who attaches himself to God’s eternal future will be raised to live in that eternal future. Focusing on what God wants today will ensure believers that they will be part of his eternal plan.

When Arthur Pink was writing his theology, he represented the traditionalist view of human immortality and the final states of human beings after judgment. In that view, all human beings are born immortal, and must live forever. To him, every time the phrase εἰς τὸν αἰῶνα appeared in the Bible, it was proof of his view.

Both the traditionalist and the universalist believes in universal innate immortality. This survey of all the uses of the phrase εἰς τὸν αἰῶνα in the New Testament shows that it was never used in the Bible to teach that doctrine.