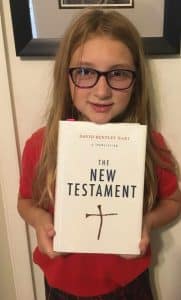 In An Eastern Orthodox Perspective, Jefferson Vann examines a new translation of the New Testament, and compares the author’s treatment of the concept of final punishment with his own.

Conditionalists voice our dissent against the traditional Western church understanding of human nature and destiny. Our arguments are with theologians like Augustine, whose teaching led to a widespread belief that most of the people God created will eventually be tormented perpetually.

Recently, I was walking around my local library in Williamsburg, Virginia, U.S.A., and came across a new book which reminded me of another ancient perspective. The book is a new translation of the New Testament, written by Eastern Orthodox scholar, David Bentley Hart.

I was curious how Hart would approach the subject of final punishment. This is how his translation of Matthew 25:41-46 reads:

Notice Hart’s translation of τὸ πῦρ τὸ αἰώνιον in verse 41, a phrase that in our Western texts is usually translated something like “eternal fire” or “everlasting fire.” Hart’s translation is singular for two reasons. First, he treats this accusative construction as if it were a genitive. Secondly, he chooses to capitalize the word “age.” He explains this construction in his Concluding Scientific Postscript:

“I have generally rendered aiōnios as “of” or “in” either “that Age” (ekeinos aiōn) or “the Age,” using the unqualified noun alone to suggest a long, if indeterminate, duration, but using the upper case letter to suggest something of its eschatological or otherworldly resonance.”2

For Hart, the “Fire of the Age” is a final punishment which is probably of a “long, if indeterminate, duration” but its duration is not the point. The point is that it is an event of another time, another age – an eschatological Age.

We conditionalists might be drawn to such a translation merely due to the fact that it draws the discussion away from the Western insistence that aiōnios always refers to perpetual activity. But perhaps we should examine the basis for Hart’s approach more carefully before aligning ourselves with it.

In verse 46, Hart translates εἰς κόλασιν αἰώνιον as “to the chastening of that Age.” He prefers the word chastening rather than “punishment,” citing that …

“The word κόλασις (kolasis) originally meant “pruning” or “docking” or “obviating the growth” of trees or other plants, and then came to mean “confinement,” “being held in check,” “punishment,” or “chastisement,” chiefly with the connotation of “correction.” Classically, the word was distinguished (by Aristotle, for instance) from τιμωρία (timōria), which means a retributive punishment only. Whether such a distinction holds here is difficult to say, since by late antiquity kolasis seems to have been used by many to describe punishment of any kind; but the only other use of the noun in the New Testament is in 1 John 4:18, where it refers not to retributive punishment, but to the suffering experienced by someone who is subject to fear because not yet perfected in charity.”3

The “life of that Age” is an equally uncomfortable translation for both the traditionalist and the conditionalist. While the followers of Augustine cannot imagine a human soul who does not live for eternity, even we believers in life only in Christ are not ready for a destiny which is not explicitly eternal. But “the life of that Age” extends no such explicit promise.

In explaining his approach to the rendering of αἰώνιος (aiōnios), Hart comments:

“I have discovered that there are many Christians whose sometimes furious objection to any other rendering revolves around a single verse, Matthew 25:46. After all, in the original Greek of the New Testament, there really are only three verses that seem to threaten “eternal punishment” for the wicked (though, in fact, none of them actually does), and many who are doctrinally or emotionally committed to the idea of eternal torment for the unelect would feel gravely bereaved if the delicious clarity of the seemingly most explicit of those verses were allowed to be obscured behind a haze of lexical indeterminacy. To these I can say only that, if they really wish to believe in the everlasting torment of the reprobate, they are perfectly free to do so, whether there is any absolutely unquestionable scriptural warrant for doing so or not…”4

Here are some examples of how Hart’s “haze of lexical indeterminacy” plays out in his translation of αἰώνιος:

Final Punishment and the meaning of certain words

I am fascinated by Hart’s perspective, not because I share it, but because I think I hear him suggesting that we cannot come to a solution to the problem of final punishment unless we are willing to readdress the meaning of certain key words – words like αἰώνιος. If we insist on applying the adjective “eternal” to both the destruction of the lost and the life the saved will enjoy, there will always be some who see this destruction as a process which goes on forever. My approach to αἰώνιος is not to obscure it behind a haze of lexical indeterminacy but to suggest that there is a better adjective in English which corresponds to the Greek adjective αἰώνιος. Here is my suggestion for translating that hotbed text of Matthew 25:46:

This translation allows the final punishment to be just that – a punishment which finally and completely deals with rebellion and sin, without making sinners immortal. But it also preserves the full meaning of the promise of Christ to believers, that their lives will be permanent. The punishment is permanent death, but the promise for the faithful is permanent life.

And how does that suggested translation for αἰώνιος compare to Hart’s admitted haze of lexical indeterminacy? It does not answer all the problems associated with how this word is used in the New Testament, but it does provide a reasonably consistent alternative:

Like Hart, we conditionalists do not believe there is an “absolutely unquestionable scriptural warrant” for belief in “the everlasting torment of the reprobate.”5 But, unlike Hart, we do believe that the wicked will be permanently destroyed.

(A special thank-you to my granddaughter, Elena, for posing with Dr. Hart’s book).