You are here: Home / Theology / Evangelical annihilationism / The consequences of separation 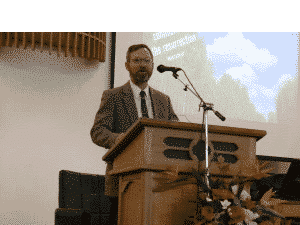 In “The consequences of separation”, Jefferson Vann concludes that final punishment is a separation from God, but there is more to it than that.

The consequences of separation

They are still saying it. People who claim to know what the Bible teaches are still defining death as a mere separation from God.

Some debate has been going on recently as to how legitimate it is to describe the final punishment of the lost in terms of separation, particularly whether that is what Paul was referring to in 2 Thessalonians 1:9. Note, for example, how the ESV translates that verse:

“They will suffer the punishment of eternal destruction, away from the presence of the Lord.”

The debate partly involves the meaning of the preposition ἀπό, which is usually translated “from.” Most of the time the word is translated as such, and thus in 2 Thessalonians 1:9 it could merely be referring to the presence of the Lord as the cause or source of the destruction. But the ESV translators took the reference as a rare instance where ἀπό indicates separation. This rendering serves as substantiating evidence for those (like the ones listed above) who define final punishment as perpetual separation from God.

I don’t think the ESV translators were right in their assumption. Paul was not alluding to separation in that verse, but to ὄλεθρος – destruction. And that destruction is αἰώνιος – permanent.

But is there a place in scripture where the final state of the lost is definitely described as separation? Yes, I think there is. I refer to Jesus’ little talk with his disciples in which he referred to himself as a vine, and to his disciples as shoots from the vine.

“I am the true vine, and my Father is the vineyard keeper. He removes every shoot on me that does not produce fruit, and he prunes each that produces fruit so that it will produce more fruit. You are already pruned because of the word I have spoken to you.”

Being removed from the vine is certainly separation. The shoots (κλῆμα) from a grapevine that are about a year old are called canes. Here’s some professional information about canes and their pruning:

“In viticulture it is important for wine grape growers to properly manage new canes as they play a vital role in the growth and development of the wine vine and the wine grape yield. Trimming or choosing canes will determine how the vine trains and grows in the vineyard. Not all shoots will develop into canes, growers monitor the growth of shoots from the time they are buds to determine which ones they will allow to grow. Canes that are thicker, or growing closer to the trunk and that are widely spaced, are often chosen as the best fruiting wood, while canes that are thinner and spaced closer together are not chosen, as thin canes can break and clusters that are too close hold moisture and increase the chance of disease. Cane management during the growing season is vital to the grape harvest, as shoots and canes that are not actively growing grapes compete with the grapes and the vine for resources. Canes are cut back after harvest, to promote new growth for the next growing cycle.”4

Jesus uses this agrarian analogy to talk about two kinds of people: those who stay with him and those who do not. He speaks of the Father as the vineyard keeper, busy removing all the canes from the vine who do not produce fruit. This is a kind of separation, but so far it is not explicit enough to serve as a description of final punishment. Stay tuned … there is more.

“Stay on me, and I in you. Just as a shoot is unable to produce fruit by itself unless it remains on the vine, neither can you unless you stay on me. I am the vine; you are the shoots. The one who stays on me and I in him produces much fruit, because you can do nothing without me. If anyone does not stay on me, he is thrown out like that detached shoot and he dries up. They gather them, throw them into the fire, and they are burned up.”

I have to be a bit inconsistent with the preposition ἐν here, because Jesus is talking about a reciprocal relationship, but still keeping up the vine/shoot metaphor. So, “on” is appropriate, because shoots can only produce grapes if they stay on the vine. This is an example of what Danker alludes to “with numerous other resources in Engl. to express contextual nuances of ἐν: at, on, among, near, with, by.”

Jesus refers to final punishment in Gehenna here by saying that detached shoots (ἐβλήθη ἔξω ὡς τὸ κλῆμα) are gathered (συνάγουσιν), thrown into the fire (εἰς τὸ πῦρ βάλλουσιν) and burned up (καίεται). While the word καίω can refer to the mere lighting or kindling of a fire,5 in this reference it is to a consuming fire which ultimately produces the second death (Revelation 21:8).

Some people have convinced themselves that final punishment merely means being thrown out – separated from the presence of God forever. Jesus shows here that the lost will also be gathered up, thrown into the fire, and burned up. Those are the consequences of separation. If people want to define final punishment as eternal separation from God, they should be consistent with John 15 and further state that those permanently separated from God will also be gathered together at the judgement, thrown into hell fire, and burned up by it.

So, yes – final punishment can legitimately be described as separation from God. In his excellent recent article in The Journal of the Evangelical Theological Society, Ed Christian shows that one of the major Old Testament images of the fate of the lost was the fear of being “cut off” from one’s people, instead of being “gathered to” them at death. To “be ‘gathered to his people’ implies being numbered among God’s people who have died faithful.’”6 The Old Testament testifies to many of the faithful who stayed on the vine, and thus were gathered to their people at death.7 Christian compares this fate with those who are “cut off,”8 and argues that in the parable Jesus taught, the rich man was cut off from the faithful (including Lazarus) within Hades. However, Christian points out that “the pertinent texts in the OT are remarkable for never portraying this gathering to the fathers as an afterlife. The fathers are not welcoming those who join them. The language seems to imply no more than their being together in the grave, or under the ground.”9