You are here: Home / Bible / New Testament / A conditionalist looks at αἰών

A conditionalist looks at αἰών

Jefferson Vann examines the meaning of the Greek word αἰών, based on how it is used in the New Testament.

Some of the arguments against conditionalism cite passages containing the Greek noun αἰών (aiōn). They argue (based on how αἰών is often translated) that hell is eternal so people who are thrown into it must also be eternal. Or they argue that hell lasts forever (again, based on a translation of αἰών), so the lives of those who will suffer in it must go on forever. But what does the word αἰών really mean? The word appears 122 times in 97 verses1 of the New Testament, usually being translated “age” when it appears as a simple substantive noun.

Examples of αἰών rendered “age” include:

Eastern Orthodox scholar David Bentley Hart explained his take on the meaning of this word in his recent translation of the New Testament:

“αἰών (aiōn, or aeon), which can sometimes mean a period of endless duration, but which more properly, throughout the whole of ancient and late antique Greek literature, means “an age,” or “a long period of time” of indeterminate duration, or even just “a substantial interval.” Its proper equivalent in Latin would be aevum. At times, it can refer to an historical epoch, to a time “long past” or “far in the future,” to something as shadowy and fleeting as the lifespan of a single person (in Homer and the Attic dramatists this is its typical meaning), or even to a considerably shorter period than that (say, a year). It can also, as it frequently does in the New Testament, refer to a particular universal dispensation: either the present world or the world to come or a heavenly sphere of reality beyond our own.”2

This view places Hart in opposition to (what we conditionalists call) the traditional view of hell: that it goes on forever and ever. Other modern versions of the New Testament continue to reflect the traditionalist view by rendering these specific uses of αἰών as “eternal” or “forever” or “everlasting.”

Examples of such passages include:

Will the final punishment of the wicked be actually final, or will it be “eternal?” Will it last forever and ever, or only ages and ages? This conditionalist believes that hell will last a long time, but that it will eventually come to an end. It will end in the destruction of all evil – including the specific demonic embodiments of evil mentioned in Revelation 20:10.

One of the reasons I believe this is how the New Testament actually uses the word αἰών – what the word actually means in various contexts. As stated above, the straightforward uses of the word are simply rendered “age” and these passages have little bearing on the question of final punishment. It is when the word αἰών is used in certain combinations with other words that reveals its particular force. What follows is a survey of such particular uses.

Hart had pointed out that the word can often refer “to a historical epoch.” Many of these references are to historical epochs in the past from the standpoint of the author. As such, they can hardly be rendered appropriately with words like “eternal” or “forever” because they are clearly denoting a time or specific event that has passed.

The prepositional phrase πρὸ τῶν αἰώνων reaches back as far as one can possibly reach into the past.

Paul is speaking of God’s wisdom which had been hidden at a particular time, before time as we know it. It was predestined to be revealed in our time, but that predestination took place before any of the ages began. Yet, even though it goes back to such a long time ago, it is clear that the act of predestination by God took place as a particular event. God was not predestining forever. It was in no sense an eternal process. Its nature as an event can be visually depicted thus: 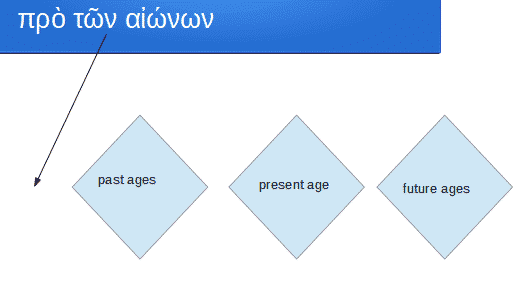 The prepositional phrase ἐκ τοῦ αἰῶνος is one step forward in time from that above. It refers to the age which is past from the standpoint of the author.

The statement summarizes all historical reality and concludes that a certain thing has not occurred during that specific age of time.

The phrase clearly incorporates an evaluation of a long period of time. But it also is limited to the description of a particular age only. It does not mean “forever” or “eternal.”

All of these texts speak of God revealing his truth to humanity. This revelation had a beginning with the first communication with Adam in Eden. It takes place within the time frame of the past age and is not described as a perpetual process.

Both phrases in this category can be visually depicted thus: 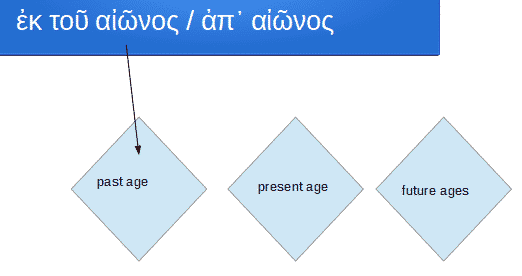 Numerous passages utilize αἰών to refer to this present age – the age that will be replaced by the age to come. Various forms of αἰών occur in these passages.

Once again, we see that the New Testament authors are clearly using αἰών in a limited way. None of these uses of the word indicate that it has perpetual of never-ending activity as its core meaning.

All the phrases in this category can be visually depicted thus: 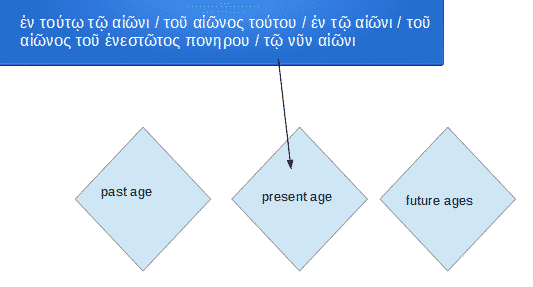 Ephesians 2:2 deserves special mention. There is a long-standing tradition of translating κατὰ τὸν αἰῶνα as “according to the course”(KJV, NKJV, NASB, ASV, WEB) or “following the course” (ESV, RSV) or “according to the ways” (CSB, HCSB). This interpretation adds a new meaning to the semantic range of αἰών. It is also unnecessary. If we understand the κατὰ as “during” (a legitimate translation in the accusative case) then the verse reads as follows:

So, Paul uses the phrase to describe the period of time (during this present age) that a person lives prior to his or her conversion.

Both Matthew and Paul use the phrase ἐν τῷ μέλλοντι in contrast to “this age.”

Nevertheless, the author of Hebrews suggests that believers have access to special powers now that will only be revealed completely in that coming age.

Hebrews 6:5 (CSB) who tasted God’s good word and the powers of the coming age (μέλλοντος αἰῶνος).

These phrases can be visually depicted thus: 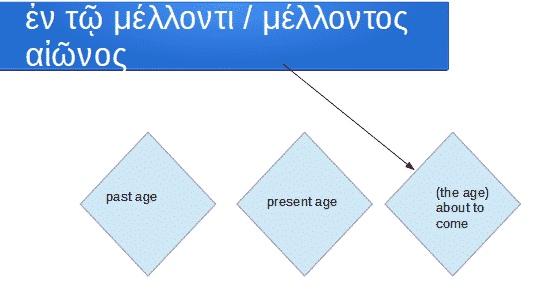 Note that both Evangelists use the same contrasting words. The future age is contrasted with “in this time” (ἐν τῷ καιρῷ τούτω). This contrast of ages can be visually depicted thus:

Luke also contrasts the ages by the simpler terms “this age”(τοῦ αἰῶνος τούτου) and “that age” (τοῦ αἰῶνος ἐκείνου).

In none of these phrases can we find any hints of eternity. But there is such a hint in the final prepositional phrase indicating a historical epoch.

This is more than just a pluralized form. It uses a different word for “come” that expresses the idea of “come to” or “come upon.” But the fact that it is plural suggests that believers will display God’s grace for more than just an age.

Also, the expression εἰς τοὺς αἰῶνας τῶν αἰώνων4 – which literally translates “for the ages of the ages” seems to imply eternity – with one exception!

Revelation 20:10, which describes the fate of Satan, the Beast, and the False Prophet, says that they will be tormented εἰς τοὺς αἰῶνας τῶν αἰώνω. This is how I translate that verse:

First, I do not translate that phrase as “forever and ever” because the context indicates that the torment will end in death. The lake of fire is an apocalyptic symbol, and the book of Revelation indicates that the reality that symbol depicts is “the second death.”5

Secondly, the vision indicates that Death itself will be destroyed in the lake of fire.6 Paul had taught that the last enemy to be destroyed is death.7

For these reasons, I reject the notion that the demons are immortal beings simply because the Bible says they will suffer for ages and ages. Suffering a long time does not make someone immortal. Immortality is a gift, and it will only be given to those who demonstrate “patience in well-doing.”10

There are two accusative prepositional phrases containing αἰών which modify verbs by expressing the idea that the verbal action is permanent rather than temporary. Although most English versions translate these phrases consistently as “forever” or “eternal,” I have found that the word “permanently” reflects the author’s intent more clearly.

The first of these is εἰς τὸν αἰῶνα, which appears 27 times in the New Testament.11 Here are some examples (in my own translation) of this how this phrase is used.

Jesus did not say that the son of a slave owner spends an eternity (or forever) in his father’s house. He simply implied that the son has a permanent position in comparison to his father’s slaves, whose positions are temporary.

Most versions have Jesus promising that his followers will “never see death” (KJV, CSB, ESV, NASB) or “never die” (NLT). But those statements are proven false by the death of Lazarus, and Jesus’ predictions of the deaths of his disciples. No, what Jesus was promising was a resurrection to permanent life.

The author’s point was not that Jesus “remains forever” (CSB) but that he remains in his priestly office permanently. He will not die and have to be replaced by another high priest.

Those versions which translate the phrase αἰωνίου ἁμαρτήματος as “eternal sin” make sinners immortal when God has not given them the gift. But a permanent sin is one which requires a permanent punishment, and that punishment is death.

The second accusative prepositional phrase acts exactly the same way. It is εἰς τοὺς αἰῶνας, which appears 10 times in the New Testament,14 and also functions adverbially. The only difference is that this phrase is plural. Here are some examples of its use.

The point is that the reign is permanent, not that it is perpetual.

We are not used to this word “permanently” in those familiar Bible texts, but the word better reflects the meaning conveyed in those texts.

One remaining text – Jude 13 – is the only instance of the phrase εἰς αἰῶνα. It is particularly significant for conditionalism because it reveals a problem with the traditional translations of αἰών. Compare my translation on the left with that of the CSB on the right:

A punishment that is reserved is kept to be administered at a particular time. If Jude meant that the punishment of the blasphemers was reserved forever, then he would be saying that it will never take place. Whereas, the Bible consistently speaks of a judgement day which will definitely take place at the end of this present age.

We conditionalists need never fear to engage in studies like this because the Bible consistently teaches that God alone is immortal, that human mortality is conditional, that only believers will be granted permanent life, and that all evil will be permanently destroyed.