You are here: Home / Other / Sermons / the goal of Christian faith 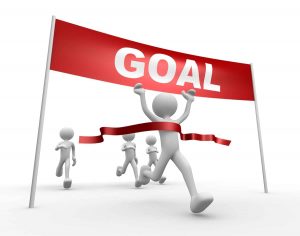 Jefferson Vann shows from Scripture that eternal life (not going to heaven when you die) is the goal of Christian faith.

“Fight the good fight of faith; take hold of the eternal life to which you were called, and you made the good confession in the presence of many witnesses” (1 Timothy 6:12 NASB).

“Compete well for the faith and lay hold of that eternal life you were called for and made your good confession for in the presence of many witnesses” (1 Timothy 6:12 NET).

We leave traces of our hopes and dreams to the generations that come after us. We place markers that let the future world know what our aspirations were. One marker is our literature.

Suppose you walk with me through the library of modern books about the goal of the Christian faith. What kind of markers are we placing, describing our hope? Let’s look at this shelf:

There are a lot more books on the shelf, but the titles of these give us the idea. Lots of people think the goal of the Christian life is to get to a place called heaven when you die.

In fact, chances are, some of you may be scratching your heads as you read this. After all, doesn’t the very verse I just quoted say that Timothy’s goal was to get to heaven when he died? I know, it says to take hold of eternal life, but isn’t that the same thing?

I don’t think it is the same thing. I know, to many that might sound heretical, so let me explain:

If your goal is getting to heaven, you cannot get there, even by dying.

Before Jesus died, he told the Jewish leaders that he was going somewhere, and where he was going they would not be able to come.1 They wondered what he meant by that. They thought he was going to go on a missionary tour and preach to the diaspora Jews scattered throughout the Roman Empire.2 Jesus repeated the same statement later to the same audience.3 By then, they had guessed that he was planning to commit suicide.4 He told them that he was not from this world; he was from above.5 John, when he wrote his Gospel, explained what Jesus meant. He said that Jesus was going “to depart from this world to the Father.”6 He quotes Jesus as saying “I am going to the Father,”7 But he promised to come back and take the disciples to be with him, so that they could be together from then on.8 He was not promising the disciples that they would go see God when they die. He was talking about the second coming.

In fact, later, when Paul talked about God here in his letter to Timothy, he said that “no human has ever seen” him, or is even “able to see” him.9 This was after some of those disciples had already died. They didn’t go to heaven. You cannot get to heaven – with or without roller skates!10

Now, obviously there are a lot of Christians who disagree with my interpretation of these passages. Even if we were to suppose that the Bible did teach that Christians go to heaven when they die, that still does not mean that going to heaven is the same thing as having eternal life.

If your goal is going to heaven, you cannot have eternal life there.

Where is this third heaven? Wrong question. The right question is “When is the third heaven?” Listen to Dr. Glenn Peoples’ comments on 2 Peter 3:

I am not saying, or course, that God is not forever. I’m simply saying that what we now refer to as heaven may not be as eternal as God is. There’s going to be a new heaven. So, if you put your hopes on going to heaven, it is not the same thing as having eternal life.

The consistent teaching of the Bible is that eternal life is the goal of the Christian faith.

I hope you see my point. Our hope should be grounded on the scriptural promises and proclamations, not human traditions. When we look at the actual texts of scripture, we see them consistently declaring that the goal of the Christian faith is eternal life.

So when the apostle Paul encourages Timothy to fight the good fight of faith and take hold of the eternal life to which he was called, he is encouraging Timothy to keep seeking the goal of his faith. That goal is not a place in the sky. That goal is immortality.

The Bible does not teach that dying and going to heaven is the goal of Christian faith.

But, you see – our human religious traditions have contradicted this plain teaching of scripture by insisting that everyone is born with a soul which is already immortal. So, the goal is not becoming immortal. It is being released from the mortal body so that the immortal soul can enjoy heaven.

I see at least four problems scripturally with this doctrine when it makes dying and going to heaven the goal of the Christian faith.

The Bible teaches us how to take hold of eternal life.

What practical difference does it make if your goal is eternal life, rather than heaven when you die? I think it makes a lot of difference, and that difference can affect us in a variety of ways. But I want to focus on one fact which is implied in today’s text.

Paul told Timothy to “fight the good fight” to take hold of that eternal life which is the believer’s goal. He implied that how Timothy lived his temporary life now determined whether or not he would reach his goal of a permanent life in the future.

When Timothy came to Christ, someone prophesied that he would fight the good fight, keeping his faith and his conscience clear.29
In his final letter to Timothy, Paul says:

“I have fought the good fight, I have finished the course, I have kept the faith; in the future there is laid up for me the crown of righteousness, which the Lord, the righteous Judge, will award to me on that day; and not only to me, but also to all who have loved His appearing.”30

Paul says he is looking forward to “the crown of righteousness.” What is that crown? It is what Jesus called “the resurrection of the righteous!”31 James and John called it the “crown of life.”32 Paul says we get that crown not at death, but at Christ’s second coming – the day of his appearing.

Our fight is not to gain a nice place to live for eternity. Our fight is to preserve something we have been promised. There is a resurrection to permanent life awaiting all those who stay true to their faith in Christ. That is the goal of Christian faith, and obtaining that goal is worth all the struggles we undergo. It is worth all the discipline and perseverance that we can muster.