You are here: Home / Book Review / Book Review Conditional Immortality (The case for orthodoxy on the doctrine of Annihilationism) By Tanwin Tanoto 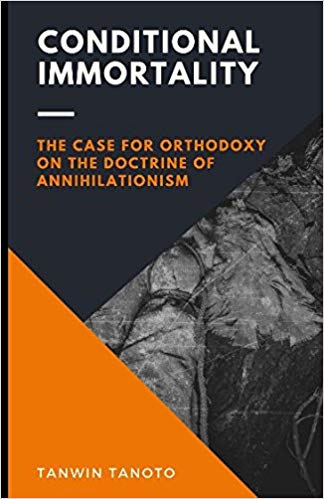 Conditional Immortality (The case for orthodoxy on the doctrine of Annihilationism) by Tanwin Tanoto is the thesis project that was written by Tanoto for his master’s program.  His main purpose for writing the book is to provide Biblical support that the doctrine of conditional immortality and annihilationism can be held by someone within the church as an orthodox view.  He recognizes that historically the ‘traditional’ view on Hell has been eternal conscious torment.  He argues that this doctrine (ECT) has been a result of the belief in the immortality of the soul, which originated in Greek Platonic thought and not the Biblical text.

This book is short and concise, and can easily be read in one sitting.  The book itself is smaller in size and there are only 55 pages.  The book is broken up into six small chapters.  Chapter 1 is a brief introduction to the project at hand, and what Tanoto intends to accomplish by writing the book.  Chapter 2 discusses the doctrine of Hell and final punishment and the three different viewpoints that have been historically taught; ECT, Annihilationism and Universalism. In chapter 3, Tanoto lays out a Biblical view and argument for conditional immortality.  Chapter 4 moves then to a theological view of conditional immortality.  Chapter 5 is where he lays out a case for conditional immortality and annihilationism and proposes that it should be taken seriously as an orthodox view within the church.  Finally, in the closing chapter, he provides a summary and conclusion.

For the reader who has spent time on this subject the majority of this material will be a quick review on the topic.  Tanoto relies heavily on sources like Edward Fudge to create his arguments.  He does engage with quite a few authors and books citing over thirty different sources in his bibliography.  He does a great job of keeping the book very clear and concise.  In chapter 1 of the book the author asks if conditional immortality was true, how would that impact our view of God?  This is a great opening and guiding question because ultimately, all of our theology paints a picture of what we think God is looks like.  The portrait of God, that our theology creates, should always look like Jesus the fullest revelation of God in the flesh.

In chapter 2 Tanoto gives a few different examples of how Hell has been viewed historically.  For example, he cites both Dante and Jonathan Edwards vivid imagery of torture in Hell.  He explains that Biblically, Hell is described as both a reality and a metaphor.  The trick then becomes understanding what is real and what is a metaphor.  What he says, is that we can count on the fact that Hell is a real place where judgment and punishment will take place.  He closes the chapter with a quick review of the three views of hell; eternal conscious torment, annihilationism, and universalism.  He quickly dismisses universalism and says that it is beyond the scope of his project to discuss.  The purpose of the book is to provide a biblical view and acceptance of conditional immortality.

Chapter 3 discusses the Biblical view of conditional immortality which begins with an examination of the language of eternal in the New Testament.  Tanoto reviews the six different times the word ‘eternal’ is used as an adjective with qualifying nouns.  Here he concludes, from Edward Fudge, that these instances are referring to something that happens, that is limited in duration but eternal in consequence.  He goes on to write that the most common theme is the juxtaposition of life and death in common texts like John 3:16 and Romans 6:23. He closes the chapter with a review of the language of unquenchable fire and undying worm.  He reminds the reader of the source of these metaphors which is Isaiah 66 where we read that the righteous are observing corpses that are being consumed by fire and worms.  The undying and unquenching then refer to the fact that the bodies will be completely consumed rather than the idea that they will suffer punishment for eternity.

Chapter 4 shifts gears then from studying words to providing thematic concepts to argue the case for conditional immortality.  Tanoto provides a fourfold approach to explain why conditional immortality should be taken seriously.  The first argument is that God alone has immortality and that man is mortal.  Eternal life is a gift that is given, and only the righteous receive it.  Second, he argues that scripture paints a picture of an eschatology in which God is fully victorious over Satan, sin, and death.  For this to be a reality, Hell cannot exist forever.  The third and fourth arguments are combined to say that the love and the justice of God demand that conditional immortality be true.  God is not vindictive or sadistic and his justice demands that he doesn’t punish a finite being for a finite crime infinitely.

Chapter 5 closes with an argument for what can be considered orthodoxy within the church historically.  He argues that the discussion of Hell should still be open for debate and should not be rigidly held as primary teaching, but as a secondary one.  The question at hand is not if Hell exists.  The question is not about the fact that there will indeed be punishment and judgement.  The question is in regards to the nature and duration of Hell itself and that should not be a primary doctrine that divides the church’s unity.  Overall, the book is well written and succinct.  For someone familiar with the basic tenants of conditional immortality and annihilationism this book will be a quick review.  The book’s strength lies in its brevity and the individual arguments that all stand on their own.  For a new reader, this book will help provide strong arguments for the topic and pique the reader’s interest to study more.  The bibliography provides plenty of material for the reader to explore as they research the topic in a more in-depth manner.