The aim of this book is described by the author, as an attempt to articulate a historical study of the three main ideas of the atonement.  Aulen actually spends more time defining, comparing and contrasting two of these views. The first view, he calls the classic view which he argues was held by the Early Church.  This view has been referred to as ‘Christus Victor’ and has also been called the ‘Ransom Theory’ of atonement. The second view, he describes as the Latin view.  Aulen says that this view overtook the classic view at some point in earlier church history.  This second view has been referred to as the ‘Satisfaction Theory’ of atonement, and it finds its origin and roots in Anselm.  During the Reformation, Luther revisited the classic view but it was short lived and quickly overtaken once again in church history.  Even Luther’s own followers failed to embrace his view of the atonement, says Aulen.  This second view takes on adaptations and other forms in history, later picking up the idea of punishment and being referred to as ‘Penal Substitutionary’ atonement theory.

Aulen takes a historical approach to writing his book tracing the theories or views as they have been articulated and expressed throughout history.

Chapter 1 The problem and its answers

In the first chapter Aulen says that the interpretation of the Christology in some ways has become ‘a work of the Hellenistic spirit’ which in turn has driven it to be intellectualistic and metaphysical in character.  Aulen wants to remind the reader that their final view of the atonement will provide them with a portrait of who God is.  This portrait should accurately reflect the narrative of scripture and the revelation of God found in Jesus Christ.  The major problem for him is that the Classical view of the atonement of the early church has been lost.  As a result, he argues that we have also lost our understanding of spiritual warfare and the theme which undergirds all of scripture which is the story that God is at war with Satan, sin and death itself.  Gods original intent for his creation is abundant life but something went wrong and God is seeking to restore his original creation to what he intended it to be.  This is the work of Jesus in the incarnation, crucifixion and resurrection.

As Aulen begins to examine the idea of the atonement he first visits the church father Irenaeus. Irenaeus taught that immortality comes through the gospel of Jesus.  Here we see in the teachings of the early church the doctrine of conditional immortality.  Irenaus taught that we are born into a world corrupted by sin and live under the dominion of death (Hebrews 2:14)  This chapter attempts to address the question of what are we saved from?  Aulen says that the Classic view of atonement teaches that “salvation is a bestowal of life rather than of forgiveness, and as a victory over mortality rather than over sin.” The cross then reveals our conditional immortality and the necessity of God’s gift of life through resurrection.  For most modern Christians this will be a complete refrain of their understanding of the atonement.  Most modern evangelicals see the atonement fixing a sin problem and not a death problem.  After all, if you believe the soul is immortal and will never die, you don’t need to be saved from death.  Understanding that we are mortals and that we don’t have an immortal soul helps to reframe the question of salvation and what we need to be saved from.

Chapter 3 The Fathers in the East and West

In the next chapter, Aulen examines how Christ came to redeem his people and set them free from the fear of slavery to death.  Christ’s atonement is a ransom from death itself.  One of the guiding questions for this chapter is how is evil overcome?  Aulen answers this question by saying that “evil is overcome not by an external use of force, but by internal methods of self-offering.”  He pushes the reader to ask the question, is there congruity with Jesus’ teaching to love our enemies and pray for those that persecute us and our view of the atonement?  In addition, how do we view the Trinity in light of the atonement?  Aulen says that the Latin view pits the Father against the Son doing an injustice to the unity of the Trinity, while the classic view sees the Father working in and through the Son to accomplish the task.  Jesus said that he came to give his life as a ransom.  While we should be careful to overanalyze atonement metaphors the idea of this statement begs the question.  To whom did Jesus offer himself as a ransom?  A normal understanding of ransom would lead us to ask the question of who is holding the victims at ransom and who are the victims.  The metaphor seems to break down and seem counterintuitive if we try to make it say that the Son was paying of the Father.  If this is the case, the Father plays the role of the villain who holds humanity captive and the hero who sends his Son to pay himself off.

As Aulen moves to the New Testament he explains that the Classic view is concerned with a narrative format of atonement.  Jesus overcomes Satan, who introduced sin, which resulted in death.  Through death, Jesus makes a public spectacle of the power and threat of death revealing that they have no power over the Author of Life. (Col 2:15). The guiding text for our understanding of conditional immortality says that immortality comes through the gospel.

“and which now has been manifested through the appearing of our Savior Christ Jesus, who abolished death and brought life and immortality to light through the gospel.”  (2 Tim 1:10)

This text is key because we see that immortality is not something human beings’ possess on their own metaphysically.  Aulen reveals that our soteriology has physical ramifications, not just moral ones.  Scripture says that Jesus came to destroy the works of the Devil which is the sin that leads to death.  (1 John 3:8) This becomes evident in Jesus words where he talks about the binding of the “strong man” in Mark 3:22.  Jesus overcomes death through death and is then able to offer immortality as a gift.

Next, Aulen asks the guiding question, how does forgiveness work?  The Classical view proposes that God simply forgives because that is who he is, the Latin view, on the other hand, demands satisfaction in the form of payment in order to forgive.  Another way we might ask this question is what is the guiding problem? Is the problem that death must be overcome, or is it that sin must be punished?  Here he lays out a fourfold understanding of the Latin view of atonement.

In this chapter, Aulen revisits the Classic view through the lens and teaching of Luther.  In doing so he contrasts the previous chapter by describing a fourfold understanding of the Latin view.

Chapter 7 Since the Reformation

Before moving to a final conclusion and summary, Aulen describes the time period after the Reformation and how atonement has been understood in more recent theology.  Here he reviews how the idea of ‘Penal Substitutionary’ atonement has become a way to understand how the satisfaction also becomes a punishment of Gods wrath and anger.  Aulen rightly pushes us to have coherence in our theology.  He wants our understanding of the atonement to match Jesus own teaching of who the Father is.  He says “the idea that lay behind the Orthodox doctrine of the atonement was inconsistent with the ‘simple teaching’ of Jesus and the love of the heavenly Father.”  When examining Jesus own teaching we might ask how an understanding of ‘Penal Substitutionary’ atonement could be overlaid onto the parable of the Prodigal Son, and what that might look like?  He goes on to say that “it was therefore intolerable that God should be thought of as needing to be ‘propitiated’ through a satisfaction offered to him.”  The summary then is that God forgives without demanding payment which reflects what we see in how Jesus interacts with people during his ministry.  In the Gospel of Mathew chapter 9, Jesus both heals and forgives.  What the religious elite find blasphemous is that Jesus claims authority to forgive people of their sins.  What we see is that Jesus is forgiving people as a result of their faith and repentance before his crucifixion.

Classic View: God reconciles the world to himself (through Jesus)

Latin View: God is reconciled through satisfaction (against Jesus, our representative)

Classic View: Sin is associated with an evil power

Latin View: Sin is associated with our individual guilt

Classic View: We must be delivered from Satan, sin and death (physical)

Latin View: We must be delivered from the punishment we deserve (moral guilt)

Classic View: Salvation is positive, a gift, it is a victory over the powers

Latin View: Salvation is negative, it is an avoidance of punishment

Latin View: Jesus sacrifice is a payment so that God can forgive (forgiveness demands justice)

Overall, Aulen does an amazing job at helping us understanding that our view of the atonement is important to our theology regardless of where we land on the topic.  He successfully traces two of the dominant ways of understanding the cross through history.  While this book is not specifically on the topic of conditional immortality it is highly entrenched in the topic.  Death is a human problem that we all have, and Jesus came to save us from death and offer eternal life to those that will choose to follow him.  Aulen reminds us that humanities life is conditional, we are the created and are contingent upon the Creator.  Christ has come to free us from the slavery of the fear of death and beckons us to come and follow him in abundant life now and after the resurrection. 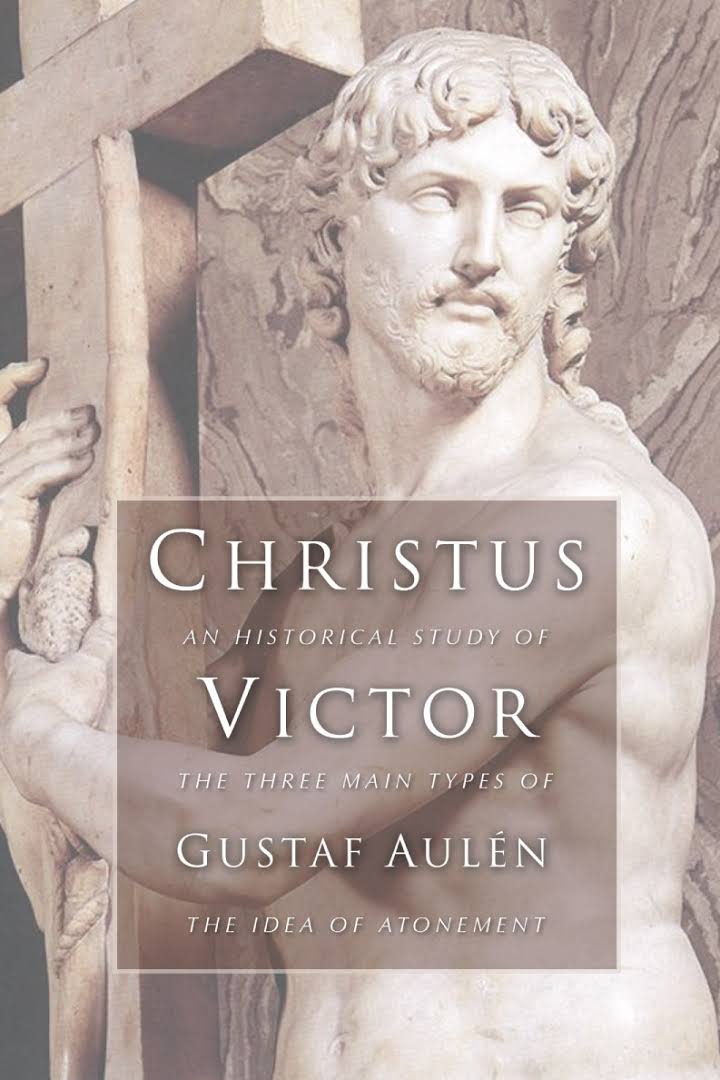