You are here: Home / Book Review / Aristotle – On the Soul | Book Review 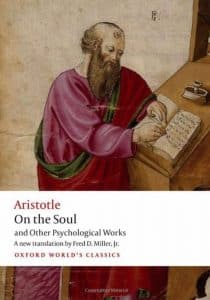 Aristotle was a Greek philosopher who lived from 384-322 BCE.  He is known as one of the greatest philosophers of antiquity along with his teacher Plato and Socrates.  Aristotle lived in Athens where he established a career and wrote on a multitude of topics.  His teacher Plato had established his own understanding of the soul and wrote about it in his book Phaedo.  Here Plato wrote about the death of his teacher Socrates and how he was able to embrace death because it allowed the soul, the true self to escape the confines of the body.  For Plato death was a release from prison into a better state of life, a disembodied life of the soul.

There are many versions and translations of Aristotle’s work on the soul.  This review is a translation done by Fred D. Miller, Jr which is put out by Oxford World’s Classics.  Miller gives a substantial introduction in which he sets the stage for Aristotle’s work for the reader.  While the book includes other works of Aristotle, for review purposes I will focus strictly on the topic of the soul.  An interesting historical note was that “in 342 Philip, king of Macedon recruited Aristotle to be the tutor of his son, the future king, Alexander the Great.”  As a philosophical teacher Aristotle was held at the highest-level giving council to the most important people of his time.  It is interesting to note, that while his teacher Plato seemed to gravitate toward the realm of ideas and forms, Aristotle swung to the other side of the spectrum connecting his studies to the realm of the observational sciences.  In this way Miller says “Aristotle rejects Plato’s thesis that there are Forms existing separately from perceptible magnitudes, and he adds that ‘it is in the perceptible forms that objects of thought exist.’”

For Aristotle a psuche or soul is very much a concrete tangible thing.  It is both physical and material, unlike Plato’s use of the word which allows for a potential escape from the material and fleshly upon death.  In this way, Aristotle uses the Greek word psuche in a similar fashion to how the Old Testament scriptures use the Hebrew word nephesh.  This is also in line with how the New Testament writers use the word psuche themselves.  Miller says that Aristotle “employs psuche or soul as a fundamental concept to explain the behavior of all living things including plants since he views nutrition and reproduction as proper functions of the soul.”  By doing so, Aristotle differs from the Biblical use of the word slightly being that the Bible only attributes nephesh and/or psuche to an animal or person.

Aristotle is willing to accept that a soul possesses the characteristics of both movement and perception being that it is tied to embodiment.  What he denies is that the soul has no form or can be explained as what has been called the “ghost inside the machine”.  He states, “for if indeed the soul is present in the entire perceiving body, there must be two bodies in the same place, if the soul is a sort of body.”  If the soul is incorporeal and not composed of elements it cannot interact with the material.  In addition, because the soul is tied to embodiment it therefore cannot be immortal but is mortal.  Therefore, it can be said that whatever the soul is, it dies when the body dies.   Aristotle says that “the soul is not separable from the body” and in this way departs from the teaching of Plato.

Aristotle goes further in a scientific manner to explain the characteristics of a soul as having “the faculties of nutrition, perception, desire, movement in place, and cognition.”  There are then a hierarchy of souls that progress from plant life, to animals to human beings.  The higher up the scale of life, the more the soul has advanced faculties with humans being the most actualized form of a soul.  To speak of the idea of the immortality of the soul becomes nonsense because “all things constituted by nature have a limit.”  This is the natural observation of the sciences that all life has a beginning or birth, a period of existence or life and a death which leads to the process of deconstruction and decay.

In summary, Aristotle’s work takes into account both his master Plato and his contemporaries teaching on the psuche.  He addresses the metaphysical arguments of the incorporeality of the soul as well as its potential for immortality.  His studies lead him to the conclusion that the soul is very much embodied or attached to the physical world that is observable.  As a result, the soul is also mortal by nature because it is the actualization of the body and has a life cycle like all life.  Aristotle’s work should be read alongside Plato’s in order to compare and contrast the Greek philosophical ideas of the day.  After this is done we can examine the Bible’s use of the word to determine which philosopher uses the word psuche most like the Biblical authors.  It seems that when this is done, Aristotle’s ideas of the soul fall more in line with how the Biblical authors use the word than how Plato uses the word.

Aristotle’s work on the soul is a must read for anyone that wants to study the topic.  Much of what has been historically been taught on the soul stems from Plato’s writing on the soul.  It is unfortunate that his counterpart and protégé has not received as much attention on the topic.  Aristotle’s use of the word psuche falls much more in line with the Biblical use of the word’s nephesh and psuche than his teacher.  What his writing reveals is that in Greek philosophy during the time of his writing there were a multitude of ideas on what a psuche was.  When we examine how the Biblical writers and Jesus used the word, we find that psuche was used to refer to both animals and humans just like Aristotle.  The only difference being that the Bible never refers to plant life as a psuche.  In the same manner the Biblical authors attribute the psuche to embodiment and mortality.  I would highly recommend reading Aristotle’s work on the soul as a classic counterpoint to the work of Plato.