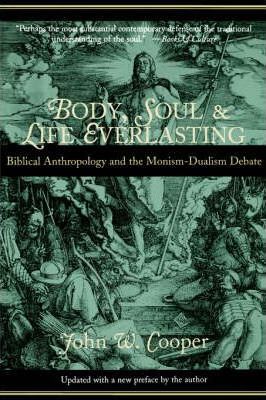 About the Author:
John Cooper is the professor of philosophical theology at Calvin Theological Seminary in Grand Rapids Michigan.

Cooper introduces the topic of Biblical anthropology by stating that at the time of Jesus, there were three views on the nature and destiny of man in general. Firstly, the Sadducees held that death was final, and there was no afterlife at all. Secondly, the Pharisees who were Hellenistic Jews had adopted the teaching of the immortal soul. And lastly, a third undefined group which he calls the majority, who held to a form of the intermediate state between life and death, as well as believing in the resurrection. In his book, he interacts with other authors that have written on the topic such as Samuele Bacchiocchi, Joel Green and Nancy Murphy, all of which have argued against his view for a version of monism. The book is broken up into ten sections, which we will mention briefly and examine some of what is discussed.

In the first chapter, Cooper begins to set the stage for the debate. He states that “dichotomists generally take ‘soul’ and ‘spirit’ as synonyms” but does not give any justification or rationale as to why. He explores the history of thought, including Augustine, who he says based his belief in the immortality of the soul on humanity being made in the image of God. He describes that Thomas Aquinas taught the soul to be a distinct substance which can survive biological death. Calvin attacked the idea of soul sleep during the reformation and defended the historical majority view. He says that Descartes believed the soul is incorporeal consisting of conscious or thinking substance. Cooper concludes that “the Christian defence of the body-soul distinction has in large part been motivated by the doctrine of the afterlife.” In contrast to the historical majority view, he says there have been others like Hobbes who say a disembodied soul cannot exist apart from the body. Others hold to what is called dual-aspect monism, which is the idea that the mind and body are the same thing. He says many challenges to dualism have come from Biblical scholarship, which claims that there has been a misunderstanding of the interpretation of the original languages.

In the second chapter, after a review of several key Hebrew words, he concludes “there are no texts in which soul or spirit or person must be interpreted as an immaterial substance which functions independent of the body.” In this chapter, Cooper seems to concede biblical holism. He agrees that the Hebrew people saw a person as a whole that is not meant to be separated. In this chapter, Cooper presents a fairly strong case against his view with the Biblical data.

Next, Cooper begins to explore the Biblical topic of Sheol, the Hebrew word for the grave. Cooper says that there is Biblical evidence that seems to indicate that the Israelites believe in an afterlife existence in Sheol. He supports this view with the Biblical language of the Rephaim or Shades. There are a total of eight passages on the Old Testament that contain this word, and all of them seem to be poetic. From there, Cooper discusses texts such as the story of Samuel and the witch of Endor. These texts lead him to the conclusion that “the final result of our Old Testament anthropology yields both functional holism and dualism.” Cooper says, the Israelites “believed that human persons continue to exist after death, though in a state far less desirable than earthly life.” In summary, it seems that Cooper desires to hold to an Aristotelian view of the soul escaping the downfalls of Platonism but still hold to an out of body intermediate state.

4. The Anthropology of Intertestamental Eschatology

Cooper begins this chapter by stating that the revelation of God is progressive. This statement seems to be asking the reader to be open to ignoring the majority of the data that was just reviewed in the Old Testament. During the intertestamental times, the Sadducees developed a theology of annihilationism, while the Pharisees believed the soul departed from the body, and there was an intermediate state. Cooper concludes that because of the intertestamental variety of views, “we simply cannot arrive at a single picture or univocal use of terminology.”

In this chapter, Cooper explores the idea that multiple texts often employ the use of synecdoche, where part terms are used to be referring to the whole. He seems to concede the argument will not be won for dualism by arguing over words. Cooper says, “The anthropological terminology of the New Testament continues to suggest functional integrity and phenomenological wholeness of human existence much as the Old Testament did.” However, he also thinks that there are texts that seem to assert the ability for life in an intermediate state between death and resurrection. In the following chapters, he goes more into detail in exploring these texts.

6. Anthropology and Personal Eschatology in the New Testament: The Non-Pauline Writings

This section of the book is an exploration of texts which seem to support an intermediate state of existence between death and resurrection. Cooper reviews texts such as 1 Peter 3 concerning the spirits in prison as well as the text in Revelation that mentions the souls under the altar. He draws on the idea that death is spoken of as ‘giving up the spirit’ and believes this indicates that the words soul and spirit can be used in multiple different ways. Interestingly, he reverts to the Old Testament and makes an argument for the Rephaim who he thinks are neither soul nor flesh. He continues the chapter by looking at The Mount of Transfiguration and the question as to if it is a vision or a literal event. He also examines the parable of the Rich man and Lazarus, Jesus words to the thief on the cross, and the question of where Jesus was between death and resurrection.

7. Anthropology and Personal Eschatology in the New Testament: The Pauline Epistles

In the seventh chapter, Cooper looks at the idea of soul sleep and the proposal of an unconscious intermediate state. He addresses the Pauline texts such as 1 Corinthians 15
And 2 Corinthians 5 which seem to conflict with one another. Cooper indicates that Paul thinks it is possible to be “absent from the body and present with the lord.” Cooper also says, “a final word about Paul’s terminology. Nowhere does he use the words ‘soul’ or ‘spirit’ to refer to persons in the afterlife. But this is no more evidence against dualism than the fact that the Old Testament may never use nephesh or ruach to refer to the dead in Sheol.”

The remaining three chapters leave the debate over specific texts and begin to talk in more general terms. Cooper states that some believe in the idea of an immediate resurrection, and for these advocates, that proposal solves the problem of belief in the intermediate state. He goes on to argue that Monism has to deal with the problem of explaining the continuity of identity between death and resurrection. For a dualist, this problem is solved because some form of the person continues to exist.

9. Practical and Theological Objections against Dualism

In chapter nine, Cooper discusses the idea that at death, we pass out of time, and there is no intermediate state. The idea is that there is another dimension that humanity does not currently experience and time is a construct of our current reality. Cooper does concede that the Bible depicts the dead as bodily beings and not immaterial spirits. He seems to argue for a form of dualism that does not want to rely on the words of soul or spirit, but cannot define the consciousness or identity that is us that survives death.

In the final chapter, Cooper looks at ideas concerning dualism as it relates to science and brain physiology. Here he thinks that dualism is supported by the evidence and reports of near-death experiences. In the end, he concludes that given all of the evidence that has been examined, what he calls a Biblical holistic dualism is the best option for a Christian definition of anthropology.

In conclusion, Cooper does a great job of examining the landscape of the discussion and debate at hand. The reader will have to decide for themselves if his argument and proposal is convincing. While Cooper seems to concede that the language of both the Old and New Testament demand a holistic portrait of anthropology, he still argues for the reality of an intermediate state as a result of other Biblical texts. Cooper relies heavily on the idea of the Rephaim or shades of which there are eight texts in total in the Old Testament. He agrees with his contemporary Bacchiocchi in multiple aspects but also wants to hold to the belief in an intermediate life after death despite much of the evidence he presents against the idea.