You are here: Home / Book Review / Book Review: Immortality or Resurrection: A Biblical study on Human Nature and Destiny By Samuele Bacchiocchi 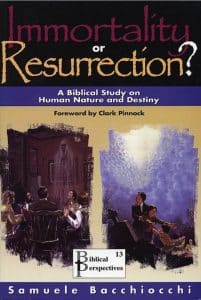 About the Author: Dr Samuele Bacchiocchi earned degrees in both England and the U.S.A.  He is the author of several books and was the professor of church history and theology at Andrews University in Berrien Springs, Michigan.  Bacchiocchi was a Seventh-day Adventist author and theologian whose work contributed to the study of the nature and destiny of humankind.

Bacchiocchi’s book is broken up into seven different sections.  He starts his work with the debate over the nature and destiny of mankind.  Next, he moves on to discuss the Old and New Testament texts separately.  In the following sections, he discusses the Biblical view of death, the state of the dead, the concept of Hell and the redemption of mankind.  I would recommend reading this book alongside Bacchiocchi’s contemporary John W. Cooper, who wrote the book “Body, Soul & Life Everlasting.”  The two authors interact with one another’s thought, and it is helpful for the reader to compare and contrast the exegesis and Biblical interpretation of texts.

Bacchiocchi’s states his goal of the book as the following, “My goal is twofold.  On the one hand, I attempt to unmask with Biblical reasoning the oldest and most possibly the greatest deception of all time, namely, that human beings possess immortal souls that live on forever…On the other hand, I endeavor to show how the Biblical wholistic view of human nature enhances our appreciation of our physical life, this present world, redemption and our ultimate destiny.”  Bacchiocchi is successful at achieving his goal.  His book accomplishes the tasks he set out to complete, and it is a very well written and organised argument for conditional immortality.

The Debate over Human Nature and Destiny

The historical debate on this topic Bacchiocchi says is classified by the classical dualist view derived from writings such as Plato, and what he calls a Biblical wholism understanding of human nature.  Here is says the Bible presents a view of humankind that is conditionally immortal.  This view is conditional on God’s gift of eternal life.  In the first view, immortality is found ontologically within the creation of humanity.  In the second view, it is found outside of man and is given by the creator.  For Bacchiocchi, where someone lands on this view has far-reaching implications for a multitude of theological topics. The question he says for most people is, will they be willing to challenge the rolling tide of tradition, which in his opinion has gone against the Biblical truth.  The remainder of the book sets out to prove that Biblical wholism as he defines it is the correct view even though church tradition has sided against him.

Bacchiocchi begins by declaring, “our study indicates that the Old Testament does not distinguish between physical and spiritual organs.”  From there, he goes on to rehearse the Biblical narrative of creation and examines the important Biblical language that is used to describe humankind.  Bacchiocchi claims that historically, there have been two problems.  One is that Greek Platonic views of the nature of man have influenced the church.  The second is that those views have led to biased translations from Hebrew to English that have hidden the truth of how the original Hebrew words were originally used in the Old Testament.  Bacchiocchi continues by discusses several of the important Biblical words such as; nephesh, ruach, neshemah, and others that are pertinent to the conversation.

Bacchiocchi next moves on to discuss the New Testament and how it may have been influenced by Greek culture and philosophy.  He again explains the important Biblical terms such as psuche and pneuma and how they relate to the Hebrew equivalents.  Bacchiocchi rightly discusses the distinction Biblically between man and God’s spirit that he gives to man.  He reveals how the Biblical language describes breath or spirit as something that God gives, and humankind receives.  Bacchiocchi discusses the language of resurrection and shows that the Biblical description of resurrection always involves a rising up of the person.  In regards to the dualist view, the language of reunion of either body and soul or body and spirit is never used in the Bible.  In Paul’s theology, the resurrection is the key and the hinge upon which all hope is placed.  Immortality is understood as a transformation of the body through the resurrection; it is not the result of humankind possessing an immortal soul.

The Biblical View of Death

Bacchiocchi begins this section of his book by giving his reader a historical glimpse of the belief in the survival of the soul after death.  Here he traces the thought from Satan’s original lie in the garden, to Augustine and the early church.  He shows how this idea was later propagated by the reformer John Calvin and is supported today with the scientific study of near-death experiences.  Bacchiocchi argues that biblically speaking death is portrayed as an enemy and not the gateway to heaven.  Bacchiocchi states, “If death released the soul from the body and thus made it possible for the soul to enjoy communion with God, then Christ would have welcomed death.”  The author Oscar Cullman has also made this point, comparing and contrasting the death of Jesus to the death of Socrates.  Bacchiocchi explains that the predominant Biblical metaphor for death is the idea of sleep.  Also, we do not hear testimonies of those that have died proclaiming that they had been with God after their deaths.  Even the beloved king David who is said to be a man after God’s own heart was buried in a grave and underwent decay according to both Peter and Paul in the book of Acts.

The State of the Dead

In this section of the book, Bacchiocchi explores the characteristics of Sheol, the Hebrew word for the grave.  He examines the idea of Sheol as the realm of the dead and the Biblical language of the condition of the dead in Sheol.  In doing so, Bacchiocchi looks at the metaphorical language of the rephaim, translated shades.  He says, “I have been surprised by the fact that even reputable scholars often ignore a fundamental hermeneutical principle that symbolic, parabolic language cannot and should not be interpreted literally.”  Here he is speaking of the fact that the dead who are personified are found in the same verses where trees are given a voice.  Interpreters have chosen to literalize one personification and take the other figuratively.  Bacchiocchi says, “Nowhere, does the Bible speak of the resurrection as the reunification of the body with the spirit or soul.”  He concludes that Sheol is not a place of punishment or a place for the conscious existence of souls or spirits of the dead.  Sheol rather is the grave, the place all life goes to decay and decompose back to the dust from which it was made.

The classic views and portrayals of Hell have tortured the minds of many and have even led some to atheism.  Bacchiocchi mentions the work of Edward Fudge and his book “The fire that consumes” as a helpful resource on understanding the Biblical view of Hell.  He also contributes to the study reviewing the Biblical language of Sheol, Gehenna, Hades and Tartarus.  Bacchiocchi draws on the difference between seeing Hell as a process versus a result.  The traditional view of eternal conscious torment has predominantly focused on Hell as a process of judgement without an end.  While the belief of annihilationism correctly understands the Biblical language and takes the second death to be a final result that ends in the cessation of life altogether.  Bacchiocchi shows how the Bible always presents its readers with the choice of life or death and that these two concepts stand in opposition to one another.  Death is the end of life and not the continuation of it in another form or state of existence.

The Consummation of Redemption

Bacchiocchi closes his book by discussing dualism and its neglect of the advent of hope.  He says that the redemption and transformation of our bodies is the final victory over death.  Death is not welcomed as a friend like Socrates proclaims, but overcome as an enemy through resurrection as Christ demonstrates.  Bacchiocchi examines the language of resurrection and judgment and defends the idea that judgement must take place after the bodily resurrection and not before.  He closes his book by saying that, “Biblical wholism challenges us to be concerned about the whole person by seeking to meet both the spiritual needs of the soul and the physical needs of the body…the Biblical wholistic view of human nature presupposes a cosmic view of redemption that encompasses the body and the soul, the material and the spiritual world.”

I would highly recommend this book as an excellent resource for the topic of the nature and destiny of humankind.  Bacchiocchi does a great job of examining the relevant issues and Biblical language.  I would also encourage the reader to read this book alongside John W. Coopers book “Body, Soul & Life Everlasting.”  Both authors write on the same topic and come to different conclusions on the Biblical understanding of anthropology.