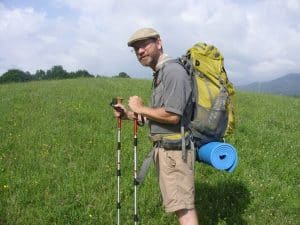 In “Stephen’s murder,” Jefferson Vann shares some notes on his translation of Acts 7:55-8:2. The text serves as a case study of Luke’s use of metaphors for death and murder. It shows that the theology of Acts is thoroughly conditionalist, with no trace of traditional dualism.

My independent translation project continues, and this morning I found myself in the last part of Acts 7, and the first part of Acts 8. It contains the story of a murder – the stoning of Stephen.

If you are following my articles on Afterlife or my devotionals, you will notice several of my peculiar translation glosses reflected in the above text.

I render πνεύματος ἁγίου1 as “Sacred Breath,” rather than the traditional “Holy Spirit.” It is my contention that the biblical authors are drawing attention to the role of God as animator when they use this term for him. The term does describe God as a person – more than simply an influence. But having the Sacred Breath inside me primarily means I am being empowered and animated by Him, not that I am being possessed by Him. That empowerment and animation is seen in the text above in the sense that Stephen could see something that the raging mob could not see. He could see Jesus in his glory in the sky. They could only see the sky.

The word “sky” might also seem out of place, since so many traditionally render the Greek word οὐρανός2 as “heaven” here. But the term consistently refers to the space above us. Luke uses the word quite consistently in Acts with that meaning up to this point:

I also render ἰδού3 as “notice,” rather than the traditional “behold.”

The term is the 2nd Aorist imperative of ὁράω,4 and is used figuratively for discern/perceive/experience/notice/attend-to.5 I like “notice” as a more up-to-date rendering, eschewing the archaic “behold.”

Interestingly, the next word – θεωρέω6 is also sometimes translated behold. Not wanting to appear redundant, most versions render it “I see.” But I like “I observe” better. It is not one of the usual words Luke uses for seeing (ὁράω7 or βλέπω8). It entails close scrutiny and detailed observation.

Here are the two other appearances of θεωρέω in Acts thus far:

Acts 3:16 And on the basis of faith in his name, his name has made this man strong, whom you observe and know. So the faith that comes through Jesus has given him this completeness in front of all of you.

Acts 7:57-59 They yelled at the top of their voices, covered their ears, and with the same passion rushed against him. They dragged him out of the city and began to stone him. And the testifiers laid their garments at the feet of a young man named Saul. While they were stoning Stephen, he called out: “Lord Jesus, receive my breath!”

This section also contains three of my peculiar independent translations. The word often rendered “together” (ὁμοθυμαδὸν)9 is a combination of ὁμός10 (same) and θυμός11 (passion), so I render it “with the same passion.” This word had also been used by Luke previously in Acts with the same meaning:

Some versions do not even translate the word in Acts 7, thinking that it merely means “together.” I think it deserves a rendering like that above.

The word I use instead of the usual term “witness” is “testifier.” I do not like witness because it suggests something that a person sees. Instead, μάρτυς12 refers to someone who says something, not someone who sees something. The mob who came against Stephen were testifying against him. Luke also uses this term consistently as people who testify to something.

Believers in the gospel are not witnesses in the popular English sense of the word. We who are living today did not witness any of the events described in the Bible. We are believers, and because we are believers, we can testify to the truth of those events. In fact, Jesus spoke a very special blessing upon us because of that very fact. He said “Blessed are those who have not seen and yet have believed.”13 The Sacred Breath empowers us to testify about what we know, which goes far beyond what we currently see or have seen.

The third word in Acts 7:57-59 which I render in a peculiar way is the word πνεῦμα, which is traditionally translated “spirit.” I have explained elsewhere that both of the terms in the Bible that are traditionally translated “spirit” are better rendered “breath.” Luke also treats πνεῦμα the same way. Thus, as I have already shown, I prefer “Sacred Breath” to the traditional “Holy Spirit.” In Acts 6:10, Luke says that opponents to Stephen “did not have the strength to stand up against his wisdom and the Breath by whom he was speaking.”

Both Solomon and Stephen were talking about what happens at death. The same God who caused life to happen at the beginning can cause it to happen again. He can resurrect a dead person by putting his breath back in him. Stephen’s hope was not going to God as a disembodied spirit, but returning to life at his resurrection. Luke describes Stephen as giving his breath up, and lying unconscious in death afterwards, totally, helplessly dependent upon the Lord Jesus to raise him to life again.

Acts 7:60 He knelt down and cried out with a loud voice, “Lord, do not hold this mistake against them!” And after saying this, he went to sleep.

Acts 8:1 Saul agreed with taking him out. On that day a severe persecution broke out against the church in Jerusalem, and all except the missionaries were scattered throughout the land of Judea and Samaria.

Acts 8:2 Devout men buried Stephen and mourned deeply over him.

This final section also contains wording which identified Luke as a conditionalist. Luke uses a metaphorical expression to describe Stephen’s death. Although the CSB renders the word ἐκοιμήθη as “he died,” most versions present Luke more accurately with the phrase “he fell asleep.” The idea of falling is not inherent within the Greek word κοιμάω,14 however, so I render it “he went to sleep.”

The footnote I attached to Acts 7:60 in my translation reads thus:

Of the two other uses of κοιμάω in Acts, one is used in the same way as here – to describe death.

The other use of κοιμάω by Luke in Acts shows the term’s more literal meaning.

Luke was not saying that Peter was dying to get away from those two soldiers. He is using the term in its literal sense, describing Peter’s sleeping position.

Luke’s word for the murder of Stephen is also significant. He says that Saul had agreed with “taking him out.” My footnote for this verse reads:

The word only appears in Acts once, but is the noun form of ἀναιρέω16 – which Luke often uses for murder.17 This word means to eliminate someone. It is a helpful addition to the text because it clarifies that Luke was talking about actual murder, not merely rendering of Stephen unconscious.

Luke concludes the narrative by describing Stephen’s burial. Note that the devout men buried Stephen, not just his body. The theology of death portrayed in the book of Acts is thoroughly conditionalist, with no trace of traditional dualism. The whole person dies, is unconscious in death, and is raised to life again at the future resurrection.

two case studies – the meaning of ἀπόλλυμι in Acts

What Happens at Death

Did You Say “Sleep”? | Sleep of the dead

On The Intermediate State of the Dead (Part 1)

Waking a friend | The dead are sleeping

After Death in the Bible | An outline

if you died today…

4pronounced horaō. It means to see.