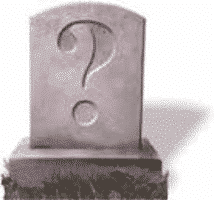 In “uncomfortable words of comfort” Jefferson Vann explains why attempts at comforting him at a recent funeral made him feel uncomfortable.

I just laid to rest the last surviving member of the family I grew up with. The casket is buried, the funeral service is over, the funeral director is paid, and I have returned from my home State.

During the ordeal, I have appreciated the company of many old friends and acquaintances. It was good to see all of them again, and to be flooded with memories of my childhood. We keep telling ourselves that we have to stop only getting together at funerals. But life gets hectic, and time takes us away until the next tragedy.

Christian funerals are an interesting phenomenon. We all get together to pay tribute to the deceased, and to hopefully bring comfort to the bereaved. However, not all Christians have the same beliefs about the afterlife, so the typical words of comfort are not as comfortable to some of us.

I am a conditionalist. I believe that Jesus promised those who believe in him that he will give them an immortal, perpetual life. But as a conditionalist, I believe that we have not been given that permanent life yet. We have been promised that life, and Jesus will keep his promise. But to say that a dead person already has that eternal life is a blatant contradiction. I cannot take comfort in a statement like that.

Back in 2013, I wrote an article that explained why Jesus’ promise to give us eternal life should not be restated as a promise of an immediate trip to heaven at death. In that article, I said that “the better life that the Bible speaks of will only begin at the resurrection. Death is not an entrance, it is an exit. It is not a friend; it is an enemy. It is not a blessing; it is a curse. It does not take us home. Jesus will take us home, when he comes back for us..”1

So, you can see how uncomfortable I can get when my well-meaning friends and relatives try to convince me that my dead loved ones are still alive. I don’t want to believe that they are still alive, because that is not the destiny Jesus promised them. He promised those who believe him that he would raise them to life again at the last day.

When believers receive their eternal life is a theological question and it deserves a biblical answer. The answer is:

“Now this is the will of the one who sent me — that I should not lose one person of every one he has given me, but raise them all up at the last day” (John 6:39 NET).2

“For this is the will of my Father — for everyone who looks on the Son and believes in him to have eternal life, and I will raise him up at the last day.” (John 6:40 NET).

“No one can come to me unless the Father who sent me draws him, and I will raise him up at the last day” (John 6:44 NET).

“The one who eats my flesh and drinks my blood has eternal life, and I will raise him up on the last day” (John 6:54 NET).

Of course, the theologians who believe differently from me have ways of dealing with such inconvenient passages of scripture. They tell us that it is not a question of either/or but of both/and. They say that Jesus was saying that believers have their eternal spiritual life now and they will get their eternal physical life at the resurrection.

But where does one go as a disembodied spirit to live out that eternal spiritual life? Those theologians are pretty consistent in answering that question. They say that the disembodied spirit goes to heaven. But as I said in another article, “Our king Jesus is the only human being who has ascended to heaven right now: “No one has ascended into heaven except he who descended from heaven, the Son of Man” (John 3:13 ESV). The only biblical hope is that he will return to take his rightful place on this earth as its king. It sounds right and biblical to talk about exchanging this world for heaven, but it is neither. The world is looking for answers. The least we believers can do is get the answers right.”3

As soon as my loved one died, I was assured that she was now an angel in heaven. But the Bible does not tell me that angels are deceased human beings. It says that they are a different species, a higher being (Hebrews 2:7,9). It says that they were all created as “ministering spirits, sent out to serve those who will inherit salvation” (Hebrews 1:14). Angels are real, and they are sent to help us in our walk with Christ, but they — themselves will not experience that walk. They long to experience what we will experience (1 Peter 1:12). No, dead humans do not become angels.

I also heard more uncomfortable words of comfort, saying that she was in a better place. She’s not in a better place. She’s in the grave. The Bible says “Whatever you find to do with your hands, do it with all your might, because there is neither work nor planning nor knowledge nor wisdom in the grave, the place where you will eventually go” (Ecclesiastes 9:10 NET). The grave is where everyone eventually goes, even the saints in the Old Testament …

“Deborah, Rebekah’s nurse, died and was buried under the oak below Bethel” (Genesis 35:8).

The New Testament affirms that the grave is where everyone goes at death. It says …

“Brothers, I can speak confidently to you about our forefather David, that he both died and was buried, and his tomb is with us to this day” (Acts 2:29).

“For David, after he had served God’s purpose in his own generation, died, was buried with his ancestors, and experienced decay” (Acts 13:36).

The place where dead people go is the grave — not heaven, not hell, not limbo, not purgatory, not nirvana, not the pearly gates, not the streets of gold, and not “home.”

The good news of the gospel is not that people escape their graves but that Christ is coming back to empty them. Jesus said “a time is coming when all who are in the tombs will hear his voice and will come out” (John 5:28-29). Where will the dead be when Jesus returns? They will be in their tombs.

As I said elsewhere, “Our hope is not in some mythical place that believers supposedly go when they die. Our hope is Jesus. He will not forget us. Death is real, but so is he.”4

Of course, I am not saying that heaven itself is mythical. I’m just asserting what the Bible clearly states: nobody goes there at death. So, when people look at their deceased loved ones and flatly deny that they are in those graves, it makes me uncomfortable.

My discomfort is not just that of a Bible teacher who has heard a minor theological mistake. We hear those kinds of misrepresentations of scripture all the time, and they merely make us cringe. No, there is something fundamentally wrong about accepting pagan teaching and presenting it as Christian, and that is exactly what has happened. The popular teaching that people go somewhere at death is designed to replace the doctrine of the blessed hope. Christians should feel uncomfortable when they hear it.

Let me tell you what would not make me uncomfortable. I would not uncomfortable at all if someone told me that my loved one has fallen asleep, but that Jesus is going to wake her up forever when he returns.

In fact, that is what the Bible instructs us all to say to those who are wondering about their loved ones who have died!

“Now we do not want you to be uninformed, brothers and sisters, about those who are asleep, so that you will not grieve like the rest who have no hope. For if we believe that Jesus died and rose again, so also we believe that God will bring with him those who have fallen asleep as Christians. For we tell you this by the word of the Lord, that we who are alive, who are left until the coming of the Lord, will surely not go ahead of those who have fallen asleep. For the Lord himself will come down from heaven with a shout of command, with the voice of the archangel, and with the trumpet of God, and the dead in Christ will rise first. Then we who are alive, who are left, will be suddenly caught up together with them in the clouds to meet the Lord in the air. And so we will always be with the Lord. Therefore encourage one another with these words” (1 Thessalonians 4:13-17 NET).

I have attended two funerals in my family this year. I’m hoping I can avoid going to another for a while. I also hope that the next funeral I attend will encourage me with God’s promise of resurrection, not make me uncomfortable with human inventions about going somewhere at death.

to die is gain

What Happens at Death

Afterlife: After or Beyond?

God’s mercy and the death-state

TOMBS & GRAVES IN THE NEW TESTAMENT

From Dust to Dust

Sheol in the Bible: The Old Testament Consensus

The Historical Development of the Immortal Soul

Set Free ? The soul after death

Is Death a Better Place ?

After Death in the Bible | An outline

Is the Resurrection Necessary?

the logic of conditionalism

Hades; Or, The Intermediate State of Man by Henry Constable

Waking a friend | The dead are sleeping

“To be gathered to his people”