You are here: Home / Book Review / What are human beings that you remember them?

Book Review: “What are human beings that you remember them?” Editor Clinton Wahlen 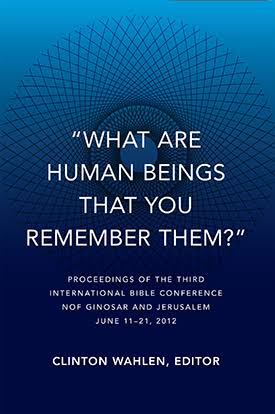 This book is a product of the Bible Research Institute and published by Herald Press.  The book is a collection of essays that were presented and came out of the International Bible Conference of the Seventh-Day Adventist’s.  Each chapter is written by a separate author that explores an aspect of Biblical Anthropology and or Eschatology.  In this review, I will give the reader a brief description or summary of the important points that are made within each chapter.  Some chapters are longer and will be given more attention than others.

Chapter 1 The Nature of a Human Being from the Beginning

In the first chapter, the author explores the creation narrative of the book of Genesis and the potential understandings of what it means to be made in the image of God.  In exploring this topic, a valid argument arises which is that if the entire person is said to be made in the image of God, an intermediate state where the body and soul exist separately would be a partial loss of the image bearer.  I found this to be a strong argument against the Imagio Dei having anything to do with the idea of humans having an immortal soul.   The author also explores the basic language if the constitution of mankind and establishes the Bible teaches humanity is as soul, we don’t have a soul.  Later, the author draws out the textual implication of immortality being contingent upon obedience to God, not something inherent within a created being itself.   Two other very valid points that are made are that Satan is the one that denies the reality of death, while God explains death to be a return to non-existence or dust.  God’s prohibition against killing is for the very reason that it is the destruction of a person an image-bearer of God.

Chapter 2 The Nature of the Human Being in Leviticus

In the second chapter, the author explores the idea that the life (soul, Hebrew nephesh) is in the blood of an animal.  We also find in Leviticus that a nephesh can die, be murdered or described as a corpse.  The authors summary is that Leviticus is a book about how we are estranged from God, mortal and impure and it explores attempts in which we can be reconciled to God and become holy.

The third chapter explores the Biblical language of body parts in the book of Proverbs.  The Hebrew word nephesh is associated with the throat and the sustenance of life.  Proverbs says that a nephesh can starve and even die.  The conclusion of the chapter is that “the organs manifest a wholistic unity when referring to human states and behaviours, but to a differentiated unity when performing functions related to their own nature.”

The fourth chapter investigates the only text in the Bible that tells a narrative of attempted necromancy.  The author goes into detail to explain how the text is actually meant to undermine the idea that necromancy is possible.  This text must be understood within its historical context of necromancy and demons within Israel’s history of idolatry.  The author states that “the narrator’s introductory remarks set boundaries for interpretation of the story.  These remarks are that Samuel is dead and physically distant from Saul, that necromancy has been forbidden, and that God is not responding or communicating with Saul.  The biggest discovery of this text is that the author actually means to reveal to its reader an insight into the role reversal of power and identity that is taking place within the narrative.

Chapter 5 Death and Future Hope in the Hebrew Bible

In chapter five the author explores how the ruach or breath of God is something God gives and removes and is not the person themselves.  Rather it is the life-giving force that animates the body to give it life.  This chapter reviews the language of death as sleep as well as the inactivity and complete destruction that is said to take place in multiple texts that refer to Sheol.  The conclusion then is that death is the end of existence and not passing into an afterlife of some sort.

This chapter explores the opposing views of Plato and his disciple Socrates.  While Plato held to the concept of the immaterial disembodied immortal soul, his protégé Socrates believed the soul was the material body and did not survive death.  The chapter then continues to explore the writings of several Second Temple Writings as well as the writings of Josephus who gives us insight into the beliefs of the Pharisees and Sadducees of Jesus day.

The seventh chapter explores the nature of the human being and the opposing arguments of monism versus dualism.  This chapter examines the use of Biblical Anthropological words such as body/soma, life/psyche, spirit/pneuma, flesh/sarx, heart/kardia.  The author concludes that while the human being is spoken of as partitive or in parts that often refer to the whole, that does not mean that any of these parts are a person alone, or that they can exist without the whole.

Chapter 8 Resurrection, Rebirth, and the Human Being in 1 and 2 Peter

This chapter is a brief examination of the language used by Peter.  The emphasis rests in the fact that Peter rests his hope in the resurrection and not a continued existence of an immortal soul apart from the body after death.

Chapter 9 Death and Hell in the New Testament

Chapter nine begins by exploring the language if death such as death/thanatos, dead/nekros, and kill/apokteinó.  The author points out that death is more often than not partnered with the concept of rising from the dead or the resurrection.  Next, the three words translated into the English word Hell are examined, these words are Hades, Tartaroo and Gehenna.  He then goes on to examine the Biblical concepts of eternity and some of the metaphors that accompany the concept of Hell such as fire, worms and wrath.  Summarizing the material, the author concludes that human beings are holistic in nature and that death is the end of life not the continuation of it in another form.

Chapter 10 The Nature of the Human Being in Christian Theology

The final four chapters then move from Biblical exegesis to historical interpretation and contemporary perspectives on several topics.  This chapter begins by examining the Early Church Fathers and their beliefs on the soul and eschatology.  Next, the reader is given a brief overview of Reformation beliefs including theologians such as Calvin and Luther as well as the Catholic Churches’ Council of Trent.  Finally, the chapter examines Modern challenges to the idea of the immortal soul and scientific thought.

In this chapter, the author explores ideas surrounding identity such as memory and how identity is also tied to the community.  This chapter is brief and shorter than some of the others, leaving the reader wanting more.

This chapter is also short and examines several spiritualistic influences on modern culture.

Chapter 13 Biblical Anthropology and Ministry in an Age of Spiritualism

Chapter thirteen looks at other religious beliefs concerning the soul and afterlife.  The author looks at animistic beliefs, Islam, Buddhism, Hinduism, Chinese religions, and traditional African religions.  The conclusion is that scripture warns that in the end times there will be spiritualistic influences that will lead people astray.

Chapter 14 Eternal Punishment in Hell and the Immortality of the Soul: Overview of the Current Debate

In the final chapter, the three understandings of Hell are summarized and examined briefly.  The three options presented are Annihilationism a fire that consumes, Eternal Conscious Torment a fire that never ends and Universalism a fire that purifies.  In the end, the author concludes that the second two options are not on the table when one properly understands the Biblical constitution of humanity as conditionally mortal and wholistic.

I found this book to be a great read on the topic.  The nice thing about a book like this is that the reader can bounce around between articles and it does not have to be read in a linear fashion.  The articles are short and easily consumable and understandable in a short amount of time.  At the same time, each chapter is very well researched and supported with ample footnotes for further investigation on each topic.  My favourite chapter was probably chapter four because it went into great detail about the “Witch of Endor” narrative.  The author did a great job explaining the text and connecting it to its historical and cultural context.  I would recommend this book as a great way to explore individual topics at the reader’s interest as they want to explore different topics that surround Biblical Anthropology and Eschatology.