You are here: Home / Book Review / What is Man?

Book Review: What is Man? by Wolfhart Pannenberg 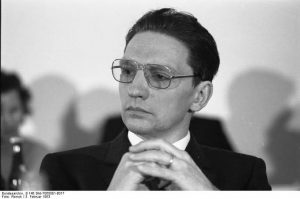 Wolfhart Pannenburg was the Professor of Systematic Theology at the University of Munich and is the author of several books on theology.  The author’s preface to the book explains that the eleven chapters found in the book originally come from a series of lectures that were presented in 1959/60.  The lectures were centred around the topic of theological anthropology and were also drawn from a radio series broadcast that was done on German Radio.

In the first chapter of the book, Pannenberg begins to explore the nature of man and the commonalities and differences between humans and animals.  A distinction that he makes is that animals seem to be limited to a specific environment which they have adapted to overtime. On the other hand, he says that “Man is not bound to an environment, but is open to the world.”  While animals seem to be contingent upon their environment, Pannenberg says that the human tendency is to “transform nature into culture” and this process is always in a constant renewal of refining and replacing previous versions of culture.  One thing that humans and other animals do have in common is their dependency on food for sustenance as well as climate change, and vegetative conditions.  In essence, both humans and animals are a part of a communal ecosystem that affects each individual animal for their survival and the continuance of the community.  Both humans and animals are contingent beings that are reliant upon nature and other external elements that are not completely within their own control.

Pannenberg explains that while the Biblical narrative describes a world in which humanity is charged to take dominion over and control, it does not remove their dependence upon God for life.  All life is derived from and dependent upon God the creator of the heavens and earth.  In addition, man is not an island but a relational being that exists within a community.  Our dependence at least in the younger stages of life also finds contingency upon other individuals mainly our parental unit, but also the wider extended community in which the family exists.  Pannenberg states that “what the environment is for animals, God is for man.”  In his first chapter, Pannenberg establishes the truth that humanity is a dependent and contingent being.

In the second chapter, Pannenberg explores the Biblical narrative and the Genesis account that attests to the truth that humanity is made in the image of God and charged to have dominion over creation.  Being made in the image of God then is tied to a vocation, being God’s coregents or rules on the earth, it is not tied to an ontological truth that we are immortal like God.  Pannenberg suggests that language develops as a way for humanity to have mastery over one’s environment.  This further allows for the growth of imagination of the species.  Because we are concerned with having dominion over our surroundings and use communication to help accomplish this task Pannenberg says that “all human interest is concentrated on the future.”

As a result of being future-oriented beings, a central tenant of our communities is the concept of hope.  This is the desire for something better to be achieved, accomplished or experienced in the future.  However, experience reveals that death is the ultimate end of every human that has ever existed.  So Pannenberg states that in actuality, “all hope appears to be foolish, if death is the end.”  He then suggests that this hope for a future reality can be seen to be broken into two different camps historically.  The first camp is the Jewish or Christian group that places its hope in the resurrection of the dead.  The second camp is a Platonic or Greek philosophical idea that propagates the teaching of the immortal soul, mainly that death is a transition to another form of life and not the end of life itself.  The first view recognizes the seriousness of death and the drastic implications of its reality but hopes in a God that can overcome death itself.  The second view hopes that death is not as serious as we actually experience it to be in reality, holding to the idea that life continues even when the body can no longer provide biological life.

Pannenberg explains that this has ramifications for how we understand humanity.  A Jewish or Christian view maintains the wholistic aspect of man, while the Greek or Platonic view must separate man into parts and place a distinction between soul and body.  The question then becomes, is Plato who writes the classic work Phaedo right in that anthropologically speaking humanity is dualistic and divisible into parts at death, leaving the body to die and the soul to continue on after death?  Or is the Biblical representation of humanity as a unified and corporeal creature just like the other animals correct, leaving our hope to be placed not in a disembodied afterlife but in a restored and embodied afterlife at the resurrection?

Pannenberg concludes that “in man, there is no independent reality of a soul in contrast to the body.”  He explains that if this is true, “this removes the basis for the idea of the immortality of the soul.  If there is no special soul that is essentially distinct from the body and independent in relation to it, then the question about the possibility of the soul is obviously unnecessary.”  This then led him to contemplate the seriousness of death.  Biblically speaking, death is a consequence of disobedience.  If death is not to be taken seriously, then neither is the consequence for disobedience.  Instead, he says that “the Christian hope of the resurrection is at least clear about the fact that no element of our present human existence can outlast death.”  Pannenberg goes on to explore the Biblical hope that all of humanity will experience resurrection and that God’s intentions are the restoration of all creation.  The paradigm for our life, death and resurrection is Jesus the fullest revelation of God.  The author also notes that death and resurrection are spoken of as sleep and awakening not any sort of conscious disembodied existence.

Humanity is created in the image of God and given the vocation to have dominion over God’s creation.  As a result, humanity is both productive and creative in establishing dominion over the environment and developing culture.  The problem is that “man makes himself a slave of the things for which he strives”, says Pannenberg.  In this way, man perverts his relationship to God who is infinite and directs its hope, desire and worship toward created and finite things.  This results in greed and man’s love for himself.  Pannenberg explains that these sorts of actions distort what God has intended for community and the expression of love through communal relationships.  In addition, these actions also distort our actions related to justice within the community because our hope is placed in the finite rather that God who is infinite.

Pannenberg next explores how finite things like money and capitalism lead to idolatry as a result of misplaced trust and hope.  These are a result of love for the material finite and created things rather than God.  This also affects our relationships with others and how we interact within the community.  Instead, Pannenberg suggests that our love should be directed toward God and then is also corrected directed toward people within our communities.  This also directs our hope and creativity in the right direction and unites us rather than dividing us.  In the tenth chapter, Pannenberg explores how traditions are solidified and created within cultures that further propagate false hope.

Jesus as our Rolemodel

In the final chapter, Pannenberg explores man as a historical being.  He concludes the book by stating that “the beginning of the end of history in Jesus’ activity and fate established Jesus’ significance as God’s final revelation to men.”  Here we are intended to see that all of human history is to be found in God’s supreme revelation of himself in Jesus Christ.  If we are to learn about ourselves we should take our cues from our creator who himself became what we are and then modelled humanity for us as a tangible example of life, death and resurrected life.  In summary, Jesus is our paradigmatic example of what it means to be a human.  The Bible attests to the fact that Jesus entered into humanity to reveal God the Father in a unique and revelatory way.

I enjoyed this short book and found it intriguing and thought-provoking.  Pannenberg invites us to take our deaths seriously.  This may, in fact, be his strongest contribution to the topic.  If death is a consequence of rebellion and sin then it must be taken seriously.  It cannot be quickly overlooked or skirted over as a ‘transitional phase’ from one form of life to another without pausing to recognize the seriousness of the punishment.  The Bible is redundantly repetitive in the fact that God is the creator and sustainer of life and as a result desires humanity to have life.  Death is not what God desires for his creation but he also honours the image of himself that he created by allowing his creation to have the freedom to choose between life and death.  For Pannenberg, the answer to the question of ‘What is Man’ is a wholistic, temporal and finite being that is contingent and dependent upon its creator for life.  Our hope then should be placed in the resurrection and the overcoming of death and not in a disembodied state of being after biological death.