You are here: Home / Book Review / The Immortality of the Soul: A Protest Joseph Agar Beet 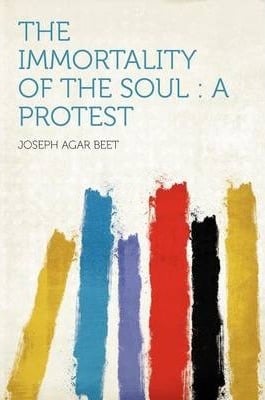 Book Review: The Immortality of the Soul: A Protest by Joseph Agar Beet

Beet begins his first chapter by explaining that the doctrine of the immortal soul can be found in the teachings and writings of both the Egyptians the Greeks which predate Christ.  Beet begins with the Greek philosophical writing of Plato explaining that in his writing Phaedo, Plato proposes that the soul exists before birth and survives bodily death.  For Plato, the soul is immortal because it is simple and indivisible.  Plato argues that for a philosopher then, there is no need to fear death because “the soul of man can never cease to be.”  Beet also gives examples from Plato’s writings; Republic, Meno and Phaedrus.

Next, Beet moves on to discuss the Egyptian view of the afterlife by addressing ‘The Book of the Dead.’  In contrast to the Greeks, the Egyptians believed the righteous receive eternal life but the unrighteous are annihilated.  The Egyptians also believed in the transmigration of a human soul into various kinds of animals.  Beet contrasts these two cultural-religious views with the writings of the Jews, stating that the idea of an immortal soul “is not taught or implied in the Old Testament.”  He further explains that for the Jews, a person is their body and when they die it is the end of life.  Humans are given a ‘spirit’ or the breath of life, but that spirit is a gift from God and it is not the person themselves.  At death, this spirit or breath returns to God who gave it.  Next, Beet reveals that the Jewish historian Josephus writes concerning the views of several different religious sects that existed in Jesus day.  Josephus writes that the Pharisees had adopted the Greek teaching of the immortal soul along with the Essenes.  This all sets the stage for the context of thought in which Jesus enters into as he teaches on the topic of life and death.

Chapter 2: The Teaching of Christ

Beet begins chapter two by investigating the teaching of Jesus on the topic of rewards and punishment.  His conclusion is that Jesus’ teaching can be summarized as the presentation of two potential paths one can take.  The first path leads to destruction and the second path leads to eternal life.  This truth is found in many texts but is most familiar in Jesus’ words spoken in John 3:16 in which he contrasts eternal life with perishing.  Beet points out that Jesus teaching on life, death and the afterlife involves a judgement before God’s throne.  In Jesus’ teaching, the timing of this judgment is said to take place after the resurrection of the body, not before.  Beet points out that the contrast made in the New Testament scriptures is one between life and destruction.  Beet says this contrast is made over thirty times in the New Testament and involves descriptive words such as; destruction, destroy, perdition, perish, lose and lost.

In addition to Jesus’ teaching, Beet explains that the teaching of Paul also reveals that humanity is mortal and that we can only “put on immortality” after we have experienced resurrection and bodily transformation.  Beet points to Jesus words in Mathew 10:28 to validate his claim that both the body and soul will be destroyed in Hell, regardless of what one believes a soul to be.  This means that no matter how one envisions destruction, it is set in contrast to having life.  Therefore, the unrepentant cannot be said to have life, otherwise, the contrast between the two states breaks down.

Chapter 3: Immortality in the Early Church

In Chapter three, Beet begins by examining the writing of the early church father Justin Martyr.  In Justin’s Dialogue with Trypho, he shows that “Justin did not hold Plato’s doctrine of endless permanence of all human souls.”  Next, Beet examines the writings of the early church father Irenaus who stands in contrast to Justin.  Irenaus, on the other hand, wrote that humanity is “by nature immortal.”  Clement of Alexandria also agrees with Irenaus and wrote that “all souls are immortal even the godless, to whom it were better not to be incorruptible.”  Beet continues his investigation into the early church fathers examining the writing of Tatian who wrote his Address to the Greeks.  In this writing, Tatian states “The soul is not itself immortal, O Greeks but mortal.  Yet it is possible for it not to die.”  Yet another early church theologian Athenagoras writes in his The Resurrection of the Dead, God “made man of an immortal soul and body” and also, men possess “an immortal soul and a rational judgement.”

Beet draws on the African theologian Tertullian who wrote in Latin to show that the early church did not always get its ideas from the Biblical text itself.  Tertullian writes in his On the Resurrection of the Flesh, “some things are known even by nature: the immortality of the soul, for instance, is held by many; the knowledge of God is possessed by all.  I will use, therefore, the opinion of Plato when asserting every soul is immortal.”  In concluding that humanity has an immortal soul, Tertullian decides the fate of the wicked must then result in eternal conscious torment, while the theologian Origen concludes that all of humanity will ultimately be saved in the end.  Beet attributes the prevalence of the eternal torment view to the influence of the theologian Augustine.  He concludes the chapter by stating that Augustine’s contribution to theology as seen in his work The City of God, propagated the success of the eternal torment view which eventually became the majority stance on the issue within Christianity.  Beet concludes that many of these early church writers failed to support their theological views from scripture but rather turned to Greek philosophical views similar to those of Plato.

Beet continues his work by fast-forwarding to the modern investigation of the issue of the immortality of the soul.  The chapter begins with an investigation into six modern works on the topic of the immortality of humanity.  Beets concludes that “of the six modern works quoted in this chapter, not one attempts to prove from the Bible.”  Beets concludes that while the early church was not conclusive on the issue and did not develop a majority view until after the time of Augustine, the modern West has blindly adopted the doctrine of the immortal soul as something that is understood to be “undisputed and universal.”

Beet’s closes chapter four by stating, “So far as I have read, no modern writer has done anything whatever to prove, from the Bible or in any other way, the endless permanence of the soul.”  While one could simply conclude that the author has not read enough on the topic and that is why he comes to this conclusion,  it may, in fact, be true that supporters of the doctrine of the immortal soul must rely on philosophical assumptions and arguments rather than scripture to support their view of anthropology.

Chapter 5: Practical Consequences: The Doom of the Lost

In the last chapter, the author discusses the importance of the study and the implications for concluding one way or another on the topic of immortality.  Beet recognizes that at times the discussion of the topic moves toward one’s idea of what it means to be made in the image and likeness of God.  Proponents of the immortal soul often appeal to the idea that because humans are made in God’s likeness, that fact demands that man also must be immortal, or than man must be triune by nature because God is triune.  Neither of these arguments finds support however, in the Biblical text of Genesis.  These ideas are simply philosophical assumptions that are brought to the table for consideration.  Beet points to scripture to appeal to the idea that eternal life is conditional upon repentance and obedience rather than our ontology.

To close, Beet returns to the idea of life and death that he started within the first chapter of the book.  He then gives several Biblical texts that support this view of the afterlife and judgement.  He states that, “the civil penalty of death is not measured by the pain inflicted but by the loss of life.”  In this sense, eternal judgement and eternal death last forever because the result of the judgment is death which someone does not return from.  In some of his closing remarks, he says to his readers that, “all the great doctrines of the Gospel are supported by abundant and decisive teaching of the Holy Scriptures.”  He invites his readers to search the scripture to find the truth for themselves and believes that when they do they will come to the same conclusion that the doctrine of the immortal soul is not Biblical.

This book is a quick, short read.  The book is just over 100 pages and has large margins all around the text which makes it even shorter of a book.  The strength of this book, in my opinion, is found in the third chapter where the author goes into detail to examine the writings of Christian theologians between the resurrection of Christ and Augustine.  Beet helps the reader see that there was not necessarily a consensus prior to the writings of Augustine and that many of the writer’s appeal to philosophy and reason rather than scripture to justify their positions on the topic.  I highly recommend this book, especially if you are interested in looking at some of what the early church theologians had to say on the topic of the immortal soul.