You are here: Home / Bible / Old Testament / a burial ground and resting place 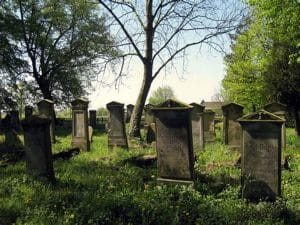 In “a burial ground and resting place” Jefferson Vann shows that the patriarchs did not see death as their salvation, but as a temporary unconscious state. They looked forward to a future resurrection.

a burial ground and resting place

Princess Sarah falls asleep in the LORD, and Abraham, whom the Hittites call a “prince of God” negotiates with them a burying place. He wanted the field of Ephron, son of Zohar. He purchased the field and the cave of Machpelah on it. It would be the only property in Canaan that Abraham would own. It would serve as a guarantee of the greater inheritance. The rest of the land promised would be received by his descendants.

This land Abraham bought would serve later as a burial ground and resting place for Abraham himself, Isaac, Jacob, Rebekah and Leah as well. Like Sarah here, their story does not end with their being transported somewhere else at death. The patriarchs did not see death as their salvation. At death, they sleep in the dust of the earth and – like us – await their Savior who will come down and rescue them from death by raising them to eternal life.

LORD, come quickly and rescue us from the enemy, death. Many of your saints await you and what you promised – eternal life.

For more on the unconscious intermediate state, see:

Did You Say “Sleep”? | Sleep of the dead

Soul Sleep of the Swiss Brethren

A Brief tour of Reformation Conditionalism

Set Free ? The soul after death

Sheol in the Bible

Hades; Or, The Intermediate State of Man by Henry Constable

“To be gathered to his people”

On The Intermediate State of the Dead (Part 1)

God’s mercy and the death-state

the blessing of an unconscious death

The Intermediate State of the Dead (Part 2)

Is Death a Better Place ?