You are here: Home / Book Review / Death and the Afterlife

Book Review of:  Death and the Afterlife by Robert A Morey 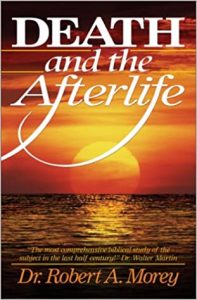 Robert A. Morey is a Christian apologist and pastor who has written several books and pamphlets. In his writings he has criticized Islam, Wicca, and non-Evangelical Christian beliefs. Morey is also the founder of the unaccredited California Biblical University and Seminary.

Chapter 1 The Hermeneutics of Death
Morey begins his book by establishing what he believes to be several principles for proper hermeneutics. Morey says that principle number one is that readers we should “take the words of the Bible in their most simplest and most natural meaning. Principle number two is that “revelation is progressive in a theological sense as well as a historical sense.” This principle will later allow him to discredit what the Old Testament has to say about death and the afterlife. Principle three is that the reader must give value to the original language. This principle then allows him to use the Greek understanding of the word Hades since it is used in the New Testament. Principal five and six stress the importance of grammar, syntax and context, while principle six has to do with the recognition and understanding figures of speech and metaphor.

Chapter 2 Body, Soul and Spirit
In the second chapter of the book, Morey states that “death is the terrible and unnatural ripping of the soul out of mans body.” Morey then goes on to explore the lexical uses of the words for soul and spirit. When examining the language of the soul he sites Josephus who records that some of the Jews had accepted the teaching of the immortal soul, and sees this as support for his Biblical view. He then goes on to cite several early-church fathers writings which he also sees as support for his view of dualism and a disembodied afterlife. After investigating the lexical evidence Morey concludes that “the words ‘soul’ and ‘spirit’ are actually synonyms and are just different names for the same invisible side of man.” He states that when a person dies their spirit/soul returns to the Creator for judgement. This idea becomes highly problematic when actually taken seriously. All one has to do is compare and contrast texts in both the Old and New Testament to see this results in discrepancies. For instance, the common thread of the Old Testament is that when a person dies they, or their nephesh, goes to Sheol. If Morey is correct Sheol must be the place where God is and that person’s spirit must also go there because it is the same as their soul. Texts in the New Testament also become troublesome as well. Peter says that when Jesus died his soul was not be abandoned to Hades but on the cross, Jesus says he relinquished his spirit to God. In the first text Jesus soul goes down after death and in the second we have Jesus spirit ascending to God. Morey wants to ignore the initial texts and proposes that Jesus spirit/soul went upward to God after death.

Chapter 3 Sheol, Hades and Gehenna
Morey believes that the Israelites held similar beliefs to the religious cultural around them, which for him means a disembodied afterlife. He says that the Old Testament supports the idea that bodies went to the grave and souls went to Sheol as disembodied spirits. He believes that upon death the Israelites believed man became a rephaim or a shade. When addressing Hades and the parable of the Rich man and Lazarus, Morey tries to walk a middle line avoiding the question of a literal or parabolic interpretation. He states instead that it must be taken literally in some sense even if it is a parable because “rabbinic parables often revolved around real historical figures.” Even if this is a valid approach, one could simply point to other cases such as Jesus encounter with the Sadducees where a scenario is presented in which the rabbis clearly do not believe in the narrative they are discussing. At the end of the chapter Morey then discusses the use of the Greek word apollumi, which means to destroy. He says, “there isn’t a single instance in the New Testament where apollumi means annihilation in the strict meaning of the word.

Chapter 4 Immortality, Resurrection and Everlasting life
In the fourth chapter Morey conceded that humans do not have immortality simply by being what they are, but that it is a gift from God. In this sense they are contingently immortal and the contingency is God. However, he then goes on to explain that everyone will live forever. Logically this means that everyone receives eternal life. This logic then leads him to have to redefine what the scripture says about everlasting life. Everlasting life in the New Testament then must be taken to refer to the quality of life instead of the quantity. Morey states that “it is obvious that ‘life’ does not refer to ‘existence’ any more than ‘death’ refers to ‘nonexistence’. Taken in this way life and death are not about living but about the quality of life one lives. Morey must make this redefinition of terms if he wants to suggest that the wicked will be tormented for eternity, which he does in the next chapter.

Chapter 5 Punishment: Conscious and Eternal
In the fifth chapter of the book Morey goes to great lengths to attempt to prove that both the righteous and the wicked are bodily resurrected and will live forever. Morey engages with contemporaries Leroy Froom who wrote The Conditionalist Faith of Our Fathers, and Edward Fudge who wrote A Fire that Consumes. He also states that all three positions; Universalist, Annihilationist, and Orthodox, have early church fathers that they can claim in support of their view. In summary of this chapter Morey says, “having examined both the Old and New Testament, we must conclude the Scriptures teach the wicked will experience eternal, conscious torment after the resurrection.”

Chapter 6 The Present Situation
Chapter six is fairly short and includes Morey’s view on how the Protestant Reformation began in a large part by the questioning of life, death and the afterlife in regards to the Catholic teaching of purgatory. He believes that since the reformation, secular humanists have sought to develop philosophical systems to undermine Christianity.

Chapter 7 Materialism
In this chapter Morey attacks the concept of materialism as it relates to Christianity. He states that “the materialist committed a major medical or anatomical error when they identified the mind as the brain.” In closing the chapter, he summarizes with these strong words. “May God hasten the day when materialism will be viewed as the philosophical osophical absurdity that it really is.”

Next, Morey briefly examines several texts that he views as support for a disembodied afterlife. First, he discusses the Mount of Transfiguration in Mathew 17:1-3. Next, he looks at Jesus encounter with the thief on the cross found in Luke 23:42-43. Third, he examines the death of Stephen and his words, “Lord Jesus, receive my spirit” found in Acts 7:55-60. Fourth, he discusses Paul’s letter to the church in Corinth where he speaks of being “absent from the body.” He then moves on to look at Paul’s words to the church in Philippi where Paul states he desires to “depart and be with Christ.” Finally, he looks at; Hebrews 12:22-24, 1 Peter 3:18-20 and Revelation 6:9-10. Morey addresses several arguments concerning Annihilationism and ultimately concludes it is unscriptural. For Morey, Sheol and Hades are terms used to describe a disembodied afterlife not the grave. He believes that words such as destroy, consume and perish do not mean the end of life or extinction. When it comes to the gift of eternal life and its promise to the righteous he believes that this refers to the quality of life after the resurrection and not the quantity.

Chapter 9 Universalism
In the ninth chapter Morey follows a similar format as some of the other chapters presenting potential arguments against his case and then providing counter arguments and scripture that he understands to support his view.

In summary, after reading this book, I found that Morey seemed to betray the simple principles of exegesis that he set forth for his readers as foundational guidelines for engaging in biblical hermeneutics. In closing, lets revisit these principles and how he may have betrayed them.

Morey says, “revelation is thus progressive in a theological as well as a historical sense.”
However, if we understand that Jesus is the fullest revelation of God in the flesh we should allow him to define terms such as the word psyche. Morey does not address how Jesus uses this word in regards to life and death.

Morey says Biblical scholars should “seek to understand what a particular word meant in the original language in which it was written.” However, he fails to recognize that syncretism may be an issue when doing this. His second principle in essence gives more weight to the Greek language than the Hebrew language but fails to recognize that the Greek terms carry with them cultural baggage that may not be assumed by the Hebrews.

Morey says, “we must observe the grammatical structure of a passage in order to discern the intent and mind of the author.” However, when engaging with texts such as Jesus words to the thief on the cross, he provides not grammatical evidence for his view.

Morey says, “we must begin with the primary assumption that each text must be understood in light of its own literary context.” However, Morey still wants to take parables such as the Rich man and Lazarus to be communicating a literal truth about the afterlife.

Morey says, “once we approach the Bible without initially assuming that we must interpret everything literally, we discover that the biblical authors used the richness of figurative language to convey biblical truth.” However, Morey wants to cite texts such as Revelation 6:9-10 where disembodied souls are portrayed as being under and alter in heaven as literal without engaging in how the Greek word psyche is used in the book as a whole or showing how one is to determine which texts are to be taken literally and which texts should be taken metaphorically in the book as a whole.